Hungary
Share
Tweet
Last week’s rioting in Hungary drew the attentions of the world’s mass media. Some even tried to compare it to that glorious moment in the history of the Hungarian working class in 1956, when attempts were made to move towards genuine workers’ democracy. But all that is false. Today’s rioting has a reactionary content, the result of a terrible austerity programme, but with no genuine Left alternative being presented to the masses.

During the night of Monday 18th September the streets of Budapest erupted in what both the national and international press represented as a mass protest movement against the Hungarian government and the Prime Minister, Ferenc Gyurcsány, calling for his resignation. 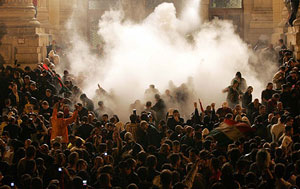 The trigger for this movement was the text of a leaked speech by the Socialist Prime Minister made last May to his own parliamentary group during the election campaign. In it he made several comments admitting to have lied continuously about the state of the economy, in order to get re-elected, and his desire to stop lying from now on to "put the economy right".

The result was that what had started as a peaceful gathering of a few thousand people in front of the Houses of Parliament, ended up with burnt out cars, the headquarters of Hungarian Television stormed, millions of forints worth of damage and images of an uncontrolled mob rampaging through the city.

This news hit the foreign media and television screens all over the world and some even went as far as to start making comparisons with 1956. Nothing could be further from the truth. A quick look at Hungarian newspapers and television coverage combined with eyewitness accounts reveals a country not preparing for a revolution but heading for a brutal austerity package designed to make it ready for the Euro with all the sacrifices being asked of ordinary people.

What did Gyurcsány say in May? He was relaxed, after all he was surrounded by his own party faithful, although he had to lay it on a bit thick because he knew he would find resistance even amongst his own to his planned severe cutbacks in public expenditure, slashing of both wages and the social wage, restrictions on education, health and social spending, rising taxes etc. In fact the whole tone of his speech was aimed at convincing his own party that unless these "painful changes" are made, the country is going to be totally bankrupt.

There was indeed a great deal of truth in his economic analysis. Hungary is one of the most indebted countries on the planet. Hungary is also one of the more corrupt countries in the world, where graft, backhanders and outright embezzlement is a way of life, rather than the exception. Gyurcsány himself is a representative of that parasitic layer that got rich, extremely rich, in the melee of the early 1990's when state assets were going for a song and when who you knew was a lot more important than what you knew for enriching yourself. Admittedly corruption, mismanagement and incompetence have played a role in running up such a huge debt, but the real reason is the fragile state of the economy itself, the result of the crisis in the world economy coupled with the actions of the first conservative MDF government between 1990-94 selling the country off for very little to foreign multinationals, including all utilities, profitable industries, like pharmaceuticals etc.

Governments over the last 16 years have tried to implement austerity programs, like the Socialists led by Gyula Horn in the mid-90's, when the first attacks on the welfare state were implemented and the wholescale closure of state enterprises and the privatisation of the profitable sectors devastated Hungarian industry. However, Hungary's foreign masters were never satisfied with what was achieved and Gyurcsány's socialists having been re-elected, are planning to do the IMF's and World Bank's bidding, so that the new rulers of Hungary can enjoy the benefits of membership of the Euro achieved by riding roughshod over the health and future of ordinary Hungarians. The current balance of payments deficit stands at over 10%, so they have a long way to go to get down to 3% to enter the Euro.

There is undoubtedly great discontent in the country. Nobody likes being lied to. After promises of tax cuts and extra spending, the sorts of measures that have been recently announced (and the rumours of a lot more to come) have caused an element of discontent. Recently it was announced that every time we go the doctor we will have to pay 300Ft and free travel for the over 65's will be abolished. The lower rate of VAT will be raised to 20%, which hits the poorest most as the lower rate applies to the essentials of life like food, fuel and energy. The government is also contemplating introducing a property tax, not just for the very rich, but starting with a value of 5 million forints, which practically covers all houses and flats. It was that first government mentioned above that sold off the entire state housing stock cheaply in the early 90's, so that a so-called "property owning democracy" could be created. Homelessness is already bad enough, but a tax like that would create an outrage. Students are also in ferment with planned demonstrations all over the country. The government is abolishing the state financing of higher and university education and introducing fees for the first time.

These and all other feared and rumoured measures are enough to get people out onto the streets. However, the vast majority of the demonstrators were not just protesting against the planned austerity program, but demanded the removal of the Prime Minister and his cabinet. The slogans, flags and graffiti heard and seen in front of the Parliament and the TV building suggested the movement involved elements of a right-wing character, including the far right. Party politics, especially the right variety has an opportunist and unprincipled character in Hungary. Most ordinary people are now so disillusioned with all available parties that voting figures are dropping drastically with every election.

In order to raise the temperature of the council election campaign leading up to election day on this coming Sunday, October 1st as well as to give extreme right-wing undertones to the 50th anniversary celebrations of the 1956 revolution next month, those that leaked Gyurcsány's speech made sure that it was released when it could best serve their purposes. A rent-a-mob of 40-50 hard right thugs, football hooligans and other lumpen elements was mobilised to take drastic action to ram a point home. It is very likely that there is a close liaison between the major right-wing conservative party FIDESZ and these extreme elements. However, it is always risky to use this type of battering ram, because it is difficult to control. This is what happened on the night of 18th-19th September and continued for several nights afterwards.

One commentator quite rightly mentioned the fact that comparisons with 1956 are totally out of order. He quoted the instances of goods in shop windows with broken glass staying untouched for weeks during the 1956 revolution, which is not at all comparable to the rampaging mob of the recent disturbances. 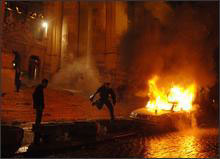 Many Hungarians are extremely upset by what they have been seeing on their television screens since 19th September. A little country, which has seen a lot of oppression and not much open protest in the last 50 years, had a rude awakening. When talking to neighbours, friends, colleagues and others on the streets I found a great deal of confusion. Many people deplore the right-wing thuggery and quite rightly. However, very few see the issues clearly and most certainly practically no one sees a real way out. They all know that they do not want Stalinism back, but now they know that capitalism cannot provide wealth, health and stability either. And still, many believe Gyurcsány that if only we could pull our belts in for a few years, the Western billions will come flowing again and we will survive. Those that believe that the FIDESZ, the extremely right-wing alternative that ruled between 1998-2002 would even be worse, don't want the Socialists out. It is the lesser evil they might vote for, if they bother at all to go out and vote. A recent opinion poll quoted that 45% want Gyurcsány out, but 48% want him to stay. In essence neither will offer any solution to the most fundamental problems facing Hungarians today: falling living standards, increasing indebtedness, worsening prospects for a job, a home and a future.

Hungary today lacks a party that would put forward a genuine socialist alternative to this confusion and chaos. Gyurcsány's government will in all likelihood stand firm and attempt to push through the austerity programme and it will be down to ordinary people to fight him and his party and ultimately the capitalist system to establish a planned economy, workers' democracy and a hope for the future. This however, cannot be done without organising themselves and acquiring a programme that would fire up the imagination of the people and give them the faith they still lack that things can be changed. These early stirrings are a sign that all is not well in the ex-Stalinist states and that there are some hard knocks coming which might start to clarify the questions for workers' organisations in Hungary and elsewhere in Eastern Europe.

Unfortunately, neither the Trade Unions, nor the Communist Party are capable and willing to provide a genuine socialist programme or lead such a fight in Hungary today. I have no doubt that building on the great, and as yet not rediscovered, fighting traditions of the Hungarian workers' movement, XXIst century Hungarians will be successful in the future building their own democratic, socialist society. A society that their forebears started creating in 1956 and which can be achieved by becoming conscious of their own capacity to change society fundamentally and for the better.