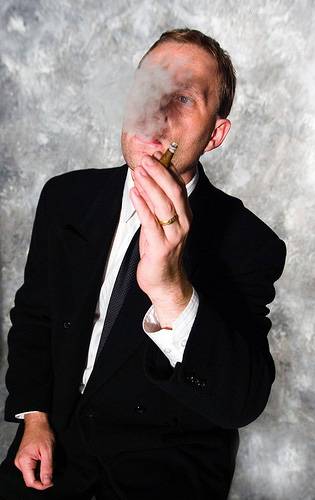 Banks are paying out huge bonuses to the very same speculators who were responsible for the credit crunch in the first place. Banking is to remain a financial wild west. If we want a financial system that works for the interest of the people we need to get rid of the whole capitalist system.

President Obama, goaded by the fury of millions of Americans at the banks gorging themselves on taxpayers’ money, has finally decided to take action against the obscene bonuses currently being paid out. He has proposed a ‘financial crisis responsibility fee,’ in effect a windfall tax on the banks that is intended to reduce the money available to be paid out as bonuses. Tough action at last?

Obama’s argument seems eminently reasonable. As a result of the banking crisis that broke out in 2007 the US government was forced to step in with a Troubled Asset Recovery Programme (Tarp). Taxpayers shelled out $90bn to save the banks’ miserable hides from their own irresponsibility by buying toxic assets that the banks had bought and storing them in the financial equivalent of a waste dump. Now the crisis has stabilised, the American people are entitled to get their money back. In effect Uncle Sam acted as an implicit insurer to the financial system. Though the banks are predictably hollering their heads off in mock outrage the Financial Times regards the measure as fair and sensible. Will it do the trick?

It is not true that the only pain inflicted on ordinary Americans was having to stump up through their taxes for toxic assets bought for the banks by the geniuses who are now demanding multi-million dollar bonuses. Millions of Americans have lost their homes and their jobs in consequence of the crisis. The economy took a huge hit. The government lost tax revenue and had to pay out vast sums to try to stimulate the economy. The American treasury has built up an enormous public debt that will have to be serviced (paid for) for decades, no doubt at the expense of public services. Simon Johnson, professor at MIT and former chief economist of the International Monetary Fund, reckons, “If the assessment reflects the damage done, the right number would be much bigger.” Obama’s levy takes no account of these real costs.

All the same, Obama comes across as a real anti-capitalist crusader compared with British Chancellor Alistair Darling. Darling has confirmed that he will not be following suit with a levy. This is despite the fact that his pet bonus supertax will be a complete damp squib. The Financial Times observes (08.01.10) that, “City bankers will suffer little or no impact from the bonus supertax imposed by the government last month.” Instead banks will dip into their own shareholders’ dividends and pay the extra taxes rather than cutting down on the bonus pool for the dealers.

Why are the banks so anxious to hold on to these ‘masters of the universe’ that they will do anything rather than cut down on bonuses? Goldman Sachs chief Blankfein declares, “We know from economic history that innovation requires risk taking.” He received a devastating reply from Paul Volcker, former Chair of the Fed (the US central bank), who retorted that, “financial innovation is worthless.” He went on, ‘I don’t want to stop you all from innovating, but do it within a structure that will not put the entire world economy at risk.” The whole point is, of course, that when the world economy goes down, the big banks know that capitalist governments will always bail them out. It’s not them that take the risk – it’s the rest of us.

Obama’s fee will have some perverse results. British-owned RBS will probably have to pay it. But RBS is now mainly government owned since it collapsed in the crisis. So it’s the British taxpayer who will actually be paying Obama’s levy for RBS. And the levy will leave less money available for the banks to rebuild their assets and to lend to American citizens. Cash-strapped people hanging on to their house or their small business for dear life could be pushed over the edge by the effects of the tax on bonuses.

All this is because you can’t control what the banks do when you don’t own them. Under capitalism we can’t win and the banks can’t lose. That makes the case for socialist nationalisation overwhelming.

Now Obama has gone further. He threatens to cut the banks down to size, so they’re not ‘too big to fail.’ That was how they blackmailed us in 2008 – ‘if we go down, you all go down.’ The Financial Times presented Obama’s plan as “a declaration of war on Wall Street.” (22.01.10) The same editorial is already advising the banks on the dodges and defences against state regulation. Gillian Tett in the same paper is aware that nothing will change soon, or even at all. “It would not be unreasonable to see this fight continue for much longer (if not into 2012),” she comments.

Nothing will happen to the banks, except that rules will be imposed. How terrible! Banks whose assets are insured by the US government will not be permitted to bet on dodgy hedge funds, risky private equity, or what is called ‘proprietary trading’. (This is called ‘the Volcker rule’.) In the old days banks borrowed money from people who wanted to save and lent that money to people who wanted to borrow. That was so old fashioned and boring. Proprietary trading is when the banks gamble ‘their own’ money (their depositors’ money) on the financial markets instead. In other words they won’t be able to put all the money they don’t own on the red at Monte Carlo. What a monstrous incursion on individual liberty! 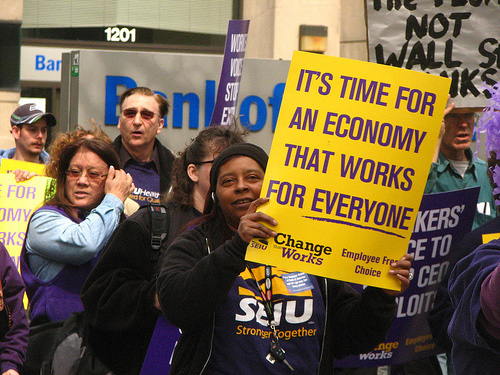 Photo by Neil Parekh / SEIU Healthcare 775NW Hold on! Obama is not really threatening to break up the banks any time soon. In any case banks can cause a systemic crisis to capitalism because of their interconnectedness, and because they concentrate all the monetary transactions of the economy in their hands, not because of the size of individual financial institutions. Obama’s words are (to quote Macbeth) “full of sound and fury, signifying nothing.” Simon Johnson, was right when he wrote on his blog, “Today’s announcement is a major (and welcome) course correction – but by itself this is unlikely to be enough.”

Banking has been deregulated in past decades both in Britain and in the USA. One stimulus for the process was that the financial authorities in New York and London actually competed as to who could provide the most attractive, deregulated environment for the financial cuckoos. Competition between nations is one reason why they won’t be effectively controlled in future, despite their manifest failure now. After all, Obama turned down the chance to levy a tax on financial transactions (called a Tobin tax) and a bonuses tax for that very reason. Capital would flee New York for somewhere with ‘lighter touch’ regulation. Finance capital plays off the potential financial centres against each other.

Both the Senate and the House of Representatives are currently holding hearings into the crisis and demanding sterner regulation of the banks. At the Financial Crisis Inquiry Commission, Chair Phil Angelides accused the banks of selling ‘investors’ (suckers) toxic assets while dumping their own holdings. “It sounds like selling a car with faulty brakes and then buying an insurance policy on the driver,” he commented.

Behind all the populist rhetoric, though, the word is that the banks are in the clear. In the Financial Times (12.01.10) Robert Reich (former labor secretary to President Clinton) laments the passing of the Glass-Steagall Act. Passed in the Great Depression as part of Roosevelt’s New Deal, the Act provided federal insurance for ‘safe’ regulated high street banks and gave notice to the buccaneering investment banks that, if they fouled up, nobody would rescue them. Reich does not mention that the Act was repealed in 1999 as a result of a massive campaign by finance capital to gain the ear of his one-time boss, the business-friendly Democrat President Clinton.

As Reich goes on, “Money is powerful. Talk is cheap.” He contrasts, “The widening gap between Wall Street and Main Street - a big bail-out for the former, unemployment for the latter; high profits and giant bonuses for the former, job and wage losses for the latter.” Reich talks the talk, but he has no alternative. The Wall Street Reform and Consumer Protection Act passing through Congress neither reforms the banks nor protects consumers - for instance against foreclosure on their homes. Reich shows that the Act in effect guarantees that the government will always bail the banks out, however stupid or reckless they have been, and at whatever the cost to the rest of us.

Banking is to remain a financial wild west, but one with a difference. The Colts will only shoot paint balls. No banker will ever get hurt. The banks are sacrosanct because they are the beating heart of the capitalist system. If we want a financial system that works for us, and doesn’t blow up in our faces, then we need to get rid of the whole capitalist system.