Share
Tweet
Venezuela’s Bolivarian Revolution was on the minds of many at the large anti-war demonstration this weekend in London. Hands off Venezuela supporters had a stall with a large banner, and at the stall they sold books, pamphlets, DVDs and distributed leaflets advertising a meeting which was held in a pub near Trafalgar Square after the rally.

Venezuela’s Bolivarian Revolution was on the minds of many at the large anti-war demonstration this weekend in London. Although the police estimate that only 15,000 people participated in the march and the rally at Trafalgar Square, the organizers put the figure at approximately 100,000. 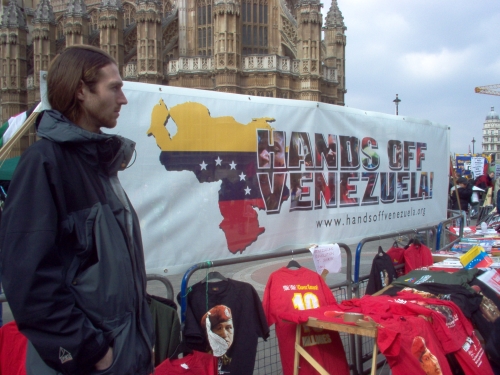 Hands off Venezuela supporters had a stall with a large banner. At the stall we sold books, pamphlets, DVDs and distributed leaflets advertising a meeting which was held in a pub near Trafalgar Square after the rally. The stall was very busy and in the end we sold out of all our material. HoV members also distributed thousands of small Venezuelan flags, which could be seen throughout the march and rally.

It was clear from the interest in Venezuela that the Bolivarian Revolution has become a well-known issue amongst activists and youth. The HoV stall was very busy and many people who came already knew about the history and the events of the Revolution, such as the coup in 2002, the bosses’ lockout of 2002/2003, as well as Chavez’s referendum victory in 2004. Many were familiar with the issues as well as the various documentaries and books on the subject. The Venezuelan revolution is clearly a growing issue and was raised on the speakers’ platform in Trafalgar Square by London Mayor Ken Livingstone. 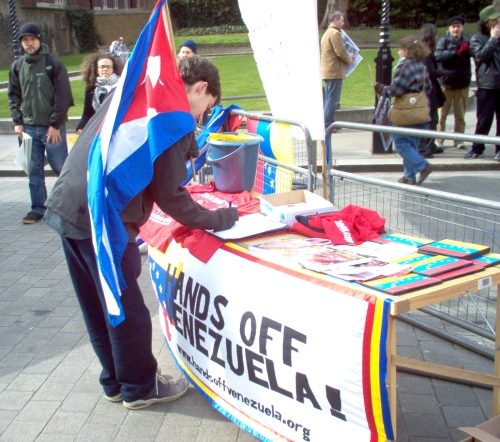 Many had heard about the Revolution through the comments of arch-reactionary Pat Robertson (who recommended that the US government simply assassinate Chavez) and Tony Blair, who just a few weeks ago, apparently forgetting the military adventure in Iraq that he launched, told Chavez that the Venezuelan government should “abide by the rules of the international community.” These comments have driven people to investigate the issues for themselves. What most people can see is that the Venezuelan Revolution needs to be defended against the imperialists, and also that the achievements of the Revolution in Venezuela, such as the “missions” and the reforms in education, health care, and other social programmes are needed here in the UK and elsewhere. Since coming to office the Blair government has done nothing but attack living standards, working conditions, and made drastic cuts to education, health care, and other social programmes. Venezuela is a shining example of what can and should be done here – an example of what people want to see in their own countries around the world. From the point of view of the imperialists, this is the real danger of the Venezuela Revolution.

The HoV meeting after the demonstration was also a great success. Some 100 people turned up to the pub just off Trafalgar Square to hear Jorge Martin speak on the Venezuelan Revolution. Speaking to the crowded room Jorge gave a brief outline of the history of the Bolivarian Revolution (the 1989 Caracazo uprising, the February 1992 military uprising led by Chavez, the 1998 election victory etc.). He explained how the “owners of the banks, industry and the land in an alliance with US imperialism organised an armed insurrection against the Chavez government” in April 2002, and how this was defeated by the direct mass action of the people in the streets. It was also the “oil workers, the organised communities and sections of the national guard that defeated the December 2002 oil sabotage and bosses’ lock out”, he explained, in an example of how “workers can run industry without bosses or managers”. Martin explained the experiences of workers’ control and management that are taking place in Venezuela and how president Chavez has opened the debate about Socialism of the 21st Century. 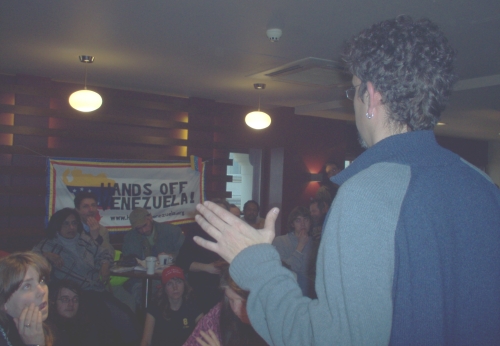 Finally Jorge Martin reminded the audience that the dangers threatening the Venezuelan revolution are very real. In the last few days, he explained “there has been an attempt to use so-called autonomist demands in the oil rich state of Zulia on the border with Colombia,” as a way of creating chaos which would “justify” a military intervention. Also the recently published National Security Strategy Report of the United States says that “in Venezuela, a demagogue awash in oil money is undermining democracy and seeking to destabilize the region”, which Jorge considered to be not only an outright lie, but something more dangerous, a direct threat from Washington against the Bolivarian Revolution. For all these reasons Jorge Martin appealed to all those present to join Hands off Venezuela and become active in the defence of the Revolution.

The HoV intervention was a great success. Interest in the Venezuelan Revolution is growing, and the issue has clearly penetrated the consciousness of many activists and youth. We are steadily building the movement in solidarity with the Revolution – by trying to break the news blackout, by spreading information and awareness and in holding meetings and discussing the ideas and the achievements of the Revolution. If you want to get involved and help to actively defend the Bolivarian Revolution, please contact us and join the HoV Campaign!