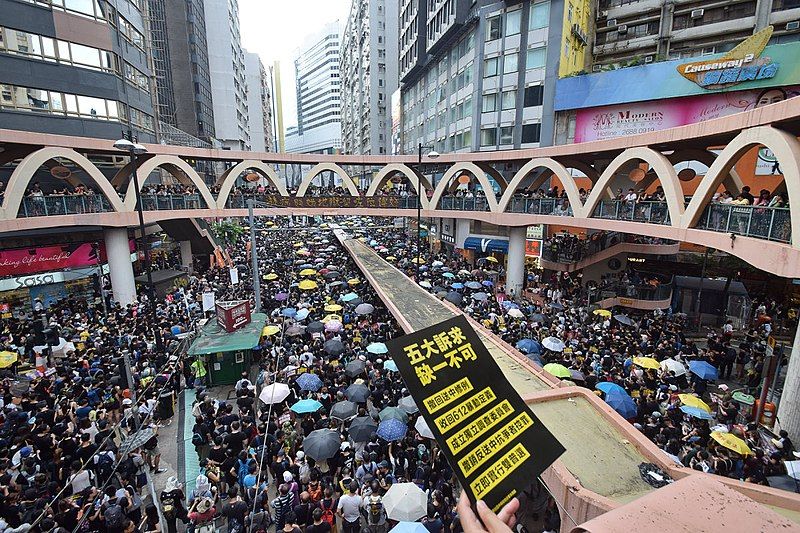 As the government in Hong Kong continues to stand its ground, with Carrie Lam out of public sight for days, calls for a general strike have resurfaced in the past weeks. A spontaneously organised general strike on Monday (5 August) was called, along with plans for mass rallies in seven districts.

The Hong Kong Confederation of Trade Unions announced that 96 unions under its leadership will be joining the strike, though in the form of mass sick day requests. Workers’ organisations from such sectors as air travel, rail, public transportation, finance, social services, and more have declared their adherence to the general strike. Many rank-and-file public sector employees, especially government office workers, also showed potential signs of following suit.

The day of the general strike began with the total paralysing of the Hong Kong International Airport, where over 3000 flight attendants, pilots, and ground staff took a sick day, causing more than 250 flights being cancelled instantly. Many subway stations also saw station workers shutting down the station or protesters keeping train doors open in order to disrupt traffic. More than 5 major subway lines have been stopped. Above ground, protesters began installing roadblocks all over the city to disrupt traffic.

At 10am in the morning, Carrie Lam and several high-ranking officials hosted a press conference for the first time after days of evading the public. She reiterated her firm stance against the movement and refused to give any concessions. She also warned that Hong Kong is rapidly approaching a “point of no return.” At the same time, the CCP regime’s Hong Kong and Macau Affairs Office announced that they would hold a second press conference tomorrow afternoon commenting on the situation. Only a few Hong Kong media were invited, and all Taiwanese media were barred from attending.

As the day went on, it was unclear how many more workers outside of transportation and social service sectors actually observed the strike. The planned seven-district rallies (later joined by Disneyland as the eighth rally point) began to take shape. However, some protesters who were enraged by an incident over the weekend, where the police tore off a female protester’s trousers and underwear and dragged her across the street naked, began to throw bricks at the police. The police in turn mobilised to clear all rally points via rubber bullets and teargas.

In the evening, white-shirted gang members descended upon many protesters once again with weapons and repeated the savage acts that they perpetrated in Yuen Long weeks earlier. Protesters continue to fight back against the mobsters and the police in the streets.

Hong Kong’s movement is approaching an insurrectionary character. But the labour leadership must actively organise on a socialist programme and appeal to the Chinese working class in order to continue and strengthen this movement.