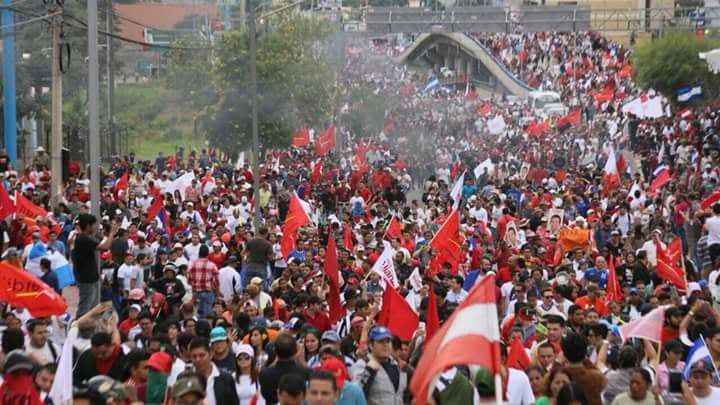 The struggle of the masses, opened after the elections in Honduras, is only comparable to the strike of 1954 and the movement against the coup d'état in 2009. It is one of the greatest instances of class struggle in the history of the country. This can only be explained by the great contradictions concentrated in society, which have placed the country on the verge of revolution. In spite of all that revolutionary impulse, Juan Orlando Hernández (JOH) has just been sworn in as president, although he was met with protesters demanding his resignation. This is a highly discredited and weak government that will be subjected to the pressure of the workers, who can prevent JOH from completing his four-year term.

The previous evening (26 January), Salvador Nasralla, from whom the election was stolen, organized a motorcade through the working class boroughs of Tegucigalpa, the capital of Honduras. People came out jubilantly to greet him and shout: Out JOH! On Saturday, 27 January, a march tried to get to the National Stadium to prevent JOH taking power. It is possible that there were more soldiers and police guarding the stadium than people inside it. There were no visiting presidents from other countries present. The demonstration was stopped by an intensive bombing of tear gas. People regrouped in downtown Tegucigalpa to hold a demonstration and there were intense clashes in different parts of the city. The population of San Pedro Sula self-organized a demonstration in the evening with the assistance of residents from Choloma and Puerto Cortés. 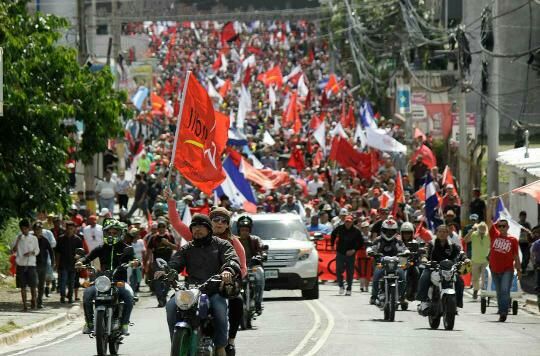 A motorcade organised by Salvador Nasralla on 26 Jan / Image: fair use

Imperialist support for the JOH government

Why, despite such a strong movement taking place, was JOH imposed? To understand this, it is necessary to look back on what happened in the previous weeks. A turning point was the Trump government’s recognition of JOH’s government. The spokeswoman for the State Department, Heather Nauert, issued a statement on 22 December that states: "We congratulate President Juan Orlando Hernandez on his victory in the 26 November presidential elections, as declared by the Honduran Supreme Electoral Tribunal (TSE)".

The aforementioned communiqué by Heather Nauert calls on Hondurans to abstain from violence and for the state – which has killed dozens of protesters in two months – to respect peaceful demonstrators. If you take over a road, are you violent and is it justifiable to be shot? The appeals that the US government makes to review human rights or any irregularities in the elections are mere hypocrisy. The US government has supported, materially and technically, the repressive armed forces. It would seem that they support this scandalous fraud openly. 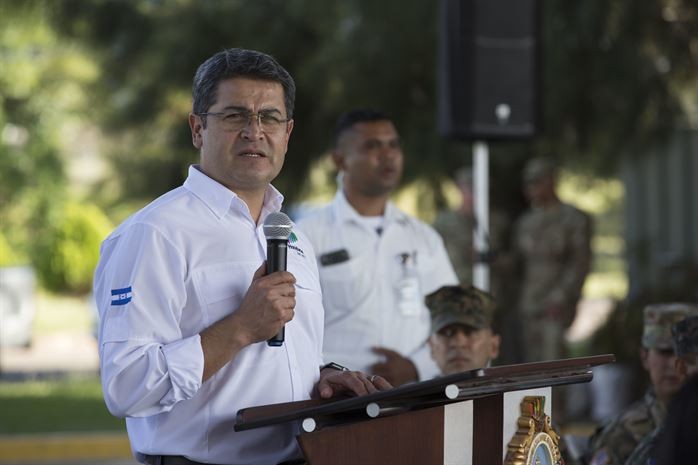 The only way imperialism could recognize Nasralla's triumph would be under the fear of losing everything. The working people do not need the recognition of the capitalists. Imperialism has enormous power but history has taught us that organized workers are capable of deciding their destiny.

How was the Somoza dynasty removed from power in Nicaragua in 1979? With a worker and peasant insurrection accompanied by a general strike. The hated Salvadoran dictator, Maximiliano Hernández Martínez, executioner of the 1932 revolution, was also driven from power by the insurrectionary general strike in May 1944. This movement encouraged the workers of the region and in Guatemala who also conducted a general strike. When Jorge Ubico clung to power the workers and students formed popular militias, and he was thrown out of the government by the armed masses. In these cases, not only was a dictator removed, but there were important social transformations. One must learn from the revolutionary history of Central America.

Hesitation and weakness of the leadership

In the entire post-electoral struggle, Salvador Nasralla, the opposition candidate for president, has hesitated and vacillated. He signed a letter from the OECD where he agreed to accept the results of the TSE, but when he realized that it was a trap he distanced himself from that document. When the fight had reached its climax he went to Washington looking for recognition of its victory, although to no avail as the Trump government soon recognized JOH as the winner of the elections. It was then that Nasralla said that he was withdrawing from politics, and even said that his cause was lost. The enormous pressure from below has prevented him from retiring from public life. That attitude is the opposite of what we have seen of the people who did not care about sacrificing their lives, who sought to profoundly change society, but those hesitations undoubtedly had an inhibiting effect on the movement by undermining the masses’ confidence. 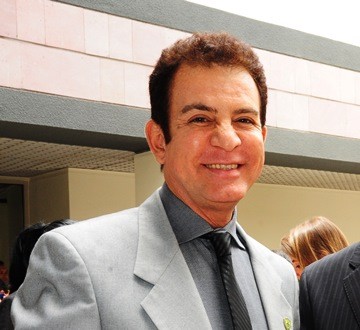 The mass movement attained an insurrectionary character at a national level and shattered the repressive state forces. The last word lay in the streets. It was completely possible to overthrow the regime but to do so it was necessary to go on the offensive. Time was against the movement. A mass struggle cannot be held permanently in a state of turmoil. If you do not have tangible conquests, sooner or later the mass struggle will lose momentum. Capitalists can wait for the masses to get tired and then they regain control. That is why we pointed out the need to move forward with actions such as a real general strike, the taking over of government buildings accompanied by the establishment of popular assemblies, and the election of representatives who will coordinate the struggle regionally and nationally, by these popular assemblies. The masses have given everything but the leaders of Libre and the unions have not been able to channel this potential. An authentically revolutionary party is like a piston that can concentrate steam power at one point, but without the piston the steam will tend to dissipate.

During the Christmas period, in family and neighborhood festivities, and during the final of the national football game, songs and shouts were heard for JOH resignation. At the beginning of the year, JOH called for a national dialogue, which was clearly a trap to advance his imposition. The Alianza against the dictatorship rejected a direct dialogue with the dictator, appealed for justice for those killed in these protests and the release of more than a 100 political prisoners, called for an opposition bloc – which is correct in principle, but in practice is an alliance at the top that has translated simply into a parliamentary bloc – and called for mobilizations from 6 January and a national strike from 20-27 of that month.

On 6 January there was a march in San Pedro Sula. On the 12th there was a huge demonstration, with actions in various parts of the country and a large manifestation in Tegucigalpa. This reflected that there was still a strong will to continue the struggle but energy was clearly at a lower level than in December, which reflected the masses’ fatigue. In a clear attempt to finish off the struggle, the state has acted with a heavy hand. Even Mel Zelaya (the President who was deposed in 2009) was not spared the tear gas of the police; the Member of Parliament Jari Dixon was beaten and journalists were attacked.

Planned protests commenced to coincide with the opening of congress. On 16 January there were simultaneous demonstrations in many different parts of the country. That, day another protester was killed by state repression. Instead of fighting against the convening of parliament, Libre oriented the battle to win control of its leading body. In previous days, alliances with the opposition parties were sought, mainly the Liberal Party. The fraud happened more clearly in the deputies and mayorships and the balance of forces in these bourgeois organizations is clearly in favor of the ruling party. The National Party (PN) ended with 61 deputies and the Alliance of the Opposition with 35 (Libre with 30, PINU with four and of the Anti-Corruption Party of Nasralla with only one). The Liberal Party, with 30 parliamentarians, voted with the Alliance. The PN, together with other small parties, obtained 67 votes and, with that, it seized the leading body of the parliament, presided again by Mauricio Oliva: faithful representative of the coup regime.

The Support Mission against Corruption and Impunity in Honduras (MACCIH) denounced the corruption network among the deputies, in which Mauricio Oliva is implicated. This denunciation was applauded by Luis Almagro of the OAS, who denounces the dictatorship when it is convenient to him but does not do anything serious to prevent its imposition. In addition to this corruption complaint, the AP news agency revealed the police chief, José Aguilar Moran, is linked to drug trafficking, claiming that in 2003 he helped transfer 780 kilograms of cocaine. This is the new government of the dictatorship.