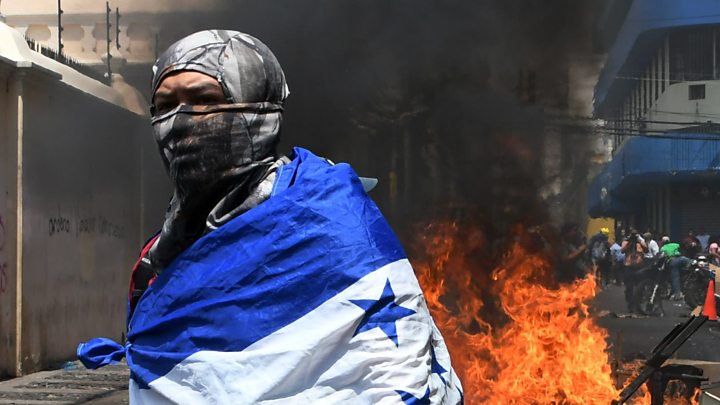 In Honduras, a mass movement is reaching insurrectionary proportions and threatens to bring down the illegitimate government of Juan Orlando Hernández (JOH). Protests against planned privatisation of public healthcare and education, which began at the end of May, have recently been escalating. The past week in Honduras has seen a significant broadening of the protest movement out from the health professionals’ and teachers’ trade unions to the wider public.

Lorry drivers have blocked off the main highways of the country and put forward a list of demands; and a special forces group of the police known as the Cobras have refused to carry out repression against the protesters. In a televised declaration, the Cobras said: “we declare our support for the people since we are part of them and we benefit from the cause for which they are fighting.”

Honduras (10pm): The National Police gave a statement in which they declared support for the people and asked demonstrators to cease to carry out acts of vandalism, looting & arson.

"To the government: Our posture is firm, we will not be cracking down on Honduran citizens." pic.twitter.com/yheAob8E54

Protests began initially amongst teachers and health professionals in response to plans from the government to cut spending on health and education. Tomás Andino, a prominent activist in Honduras, said that the reforms “imply the total privatisation” and “destruction of public health and education”. Our comrades from Izquierda Marxista Honduras have told us that the government of Juan Orlando Hernández (JOH) wants to pass a law eliminating the rights of workers in the health and education sector. Protests in response to this won the immediate suspension of this planned law earlier this month, but protests have continued to gather momentum, and the workers are now calling for the removal of JOH.

According to our comrades on the ground, the movement is growing, more and more sectors are coming out in support and new leaders from the rank-and-file of the unions are coming to the fore. Dr Suyapa Figueroa, President of the Honduras Medical College, has denounced the government as “no longer recognised as credible or legitimate”. In addition, LIBRE, the main opposition party, whose leader Mel Zelaya was ousted from government in US-backed coup in 2009, has come out in support of the protesters. They call for the immediate resignation of JOH and fully support the continuation of the road blockades and “whatever other insurrectional action until the dictatorship falls.”

As aforementioned, Mel Zelaya was removed from office by a coup in 2009. Zelaya was a centre-left candidate who forged an alliance with Hugo Chávez and the Bolivarian Revolution in 2008, thereby ringing alarm bells for US imperialist interests in the region. Hillary Clinton and John Negroponte (the ambassador to Honduras during the Reagan administration implicated in the Iran-Contra Affair) backed the coup.

Down with the corrupt, repressive government!

In 2014, JOH became president. It has been revealed that, during his term in office, president Hernández was a major suspect in a DEA investigation into large scale drug trafficking and money laundering. In November last year, Hernández’s brother Tony Hernández was arrested in the US for conspiring to traffic tonnes of cocaine into the country from 2004-16. In 2017, JOH changed the electoral rules to allow himself to run for a second term. In these elections, the opposition candidate, Nasralla, who had founded an anti-corruption party to contest JOH’s presidential campaign, was clearly in the lead, with 60 percent of the votes counted. However, the electronic vote counters went down for 36 hours, and when they came back online, JOH won by a narrow margin of 43 percent to Nasralla’s 41 percent. There was a clear indication of electoral fraud, which was recognised by international observers and even the OAS. Protests were sparked in outrage that resulted in the death of 30 people. Understandably, the general public are bitterly opposed to this corrupt and scandalous government.

Not only is the president suspected of being involved in major international crime, but he has also made continuous cuts to public health and education. Less than 10 percent of the current annual budget is allocated for the health sector, and the budget for education has dropped 13 percent in the past 10 years. As a result, 40 percent of Emergency Departments have inadequate medical cover, and in the second largest city, San Pedro Sula, maternity clinics only have enough resources to offer emergency appointments to pregnant mothers and not vital regular check-ups. Marco Calderón, a primary school teacher, said that in his school “we have no library, no computer classes, no English teacher” and funding was refused to fix the school roof, from which asbestos was leaking. Meanwhile, the defence budget has seen an increase from 12.5 percent to 14.5 percent during the same period. Other than increasing funding for defence, it has also been revealed that $350 million was siphoned from the public health insurance organisation IHSS, with some of the funds being funnelled into JOH’s election campaign in 2013.

The masses are suffering from these severe cuts, as 70 percent of the population now live below the poverty line – up from 50 percent in 2010. Thousands are fleeing the country, escaping poverty, crime and violence, attempting to migrate to the US.

The persistent calls for a general strike from the health and education trade unions are gaining support amongst broader layers of the working class. They are desperately seeking a way out of the current economic crisis and an end to the repressive government that is exacerbating their misery.

The standing down of the Cobra special police force has encouraged demonstrators to stay out on the streets and build blockades. The National Directorate of Special Forces (DNFE), the leading body responsible for the Cobras, have been protesting by staying in their barracks since 18 July. They are demanding better life insurance, healthcare and welfare for their families. It is clear from these demands that the police have similar concerns to the protesters, whose principal demands include support for the development of health and education sectors. However, our comrades on the ground say people are suspicious of the support from the police. During the 2017 protest, the police came out in support by going on strike for 24 hours. The government then agreed that they wouldn’t deploy the police force against peaceful protests and promised a salary increase. Subsequently, the police forces returned to repressing the movement once they had achieved their own demands. 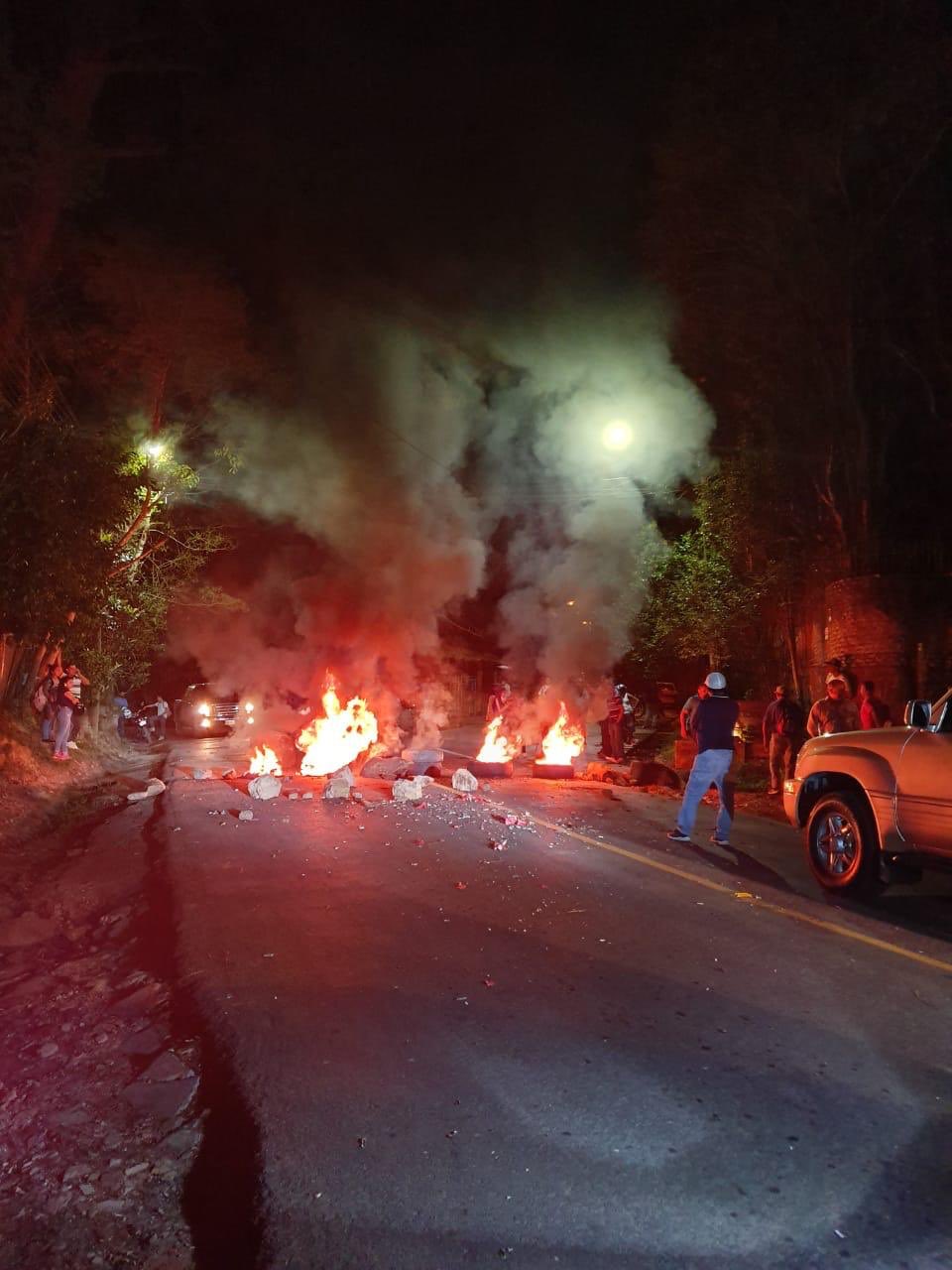 Persistent calls for a general strike from the health and education trade unions are gaining support amongst broader layers of the working class / Image: fair use

The government of Juan Orlando Hernández is likely to step up repression against these latest protests and has threatened to use the army. Violence from state forces has already resulted in 17 demonstrators suffering bullet wounds and two having now died from their injuries in hospital. As pointed out by Tomás Andino, the regime has “a strong military component” and enjoys “great support from North American imperialism”. It is important to highlight the hypocrisy between the intense US media coverage, calling for the ousting of the so-called Maduro dictatorship in Venezuela, and the comparative media silence around the popular protests against the violent dictatorship in Honduras, which defends US imperialist interests in the region. The US has a history of destabilising democratically elected governments in Latin America that attempt to improve the living conditions of their populations and reject economic servitude to the US.

The government in Honduras is very weak, and JOH’s ruling National Party is suffering from an internal crisis. They are only maintaining power thanks to US support and the armed forces. Facing this formidable military force, the masses are rising up and revitalising the movement, which suffered an ebb after the 2009 coup and then the protests against election fraud in 2017/18.

What is required now to face up against this violent and powerful state apparatus is for the student unions, LIBRE party and all other major trade unions to come out in support of the health and education union members and mobilise for a general strike. Not only that, but they need to organise on a national level to sustain the strike action across the country in order to economically paralyse it, effectively defend themselves against state repression, and ultimately topple the dictatorship. Action committees should be set up in every neighbourhood and workplace and they should be coordinated nationally, to give the insurrection a more organised character.

Solidarity with the workers and the people of Honduras!