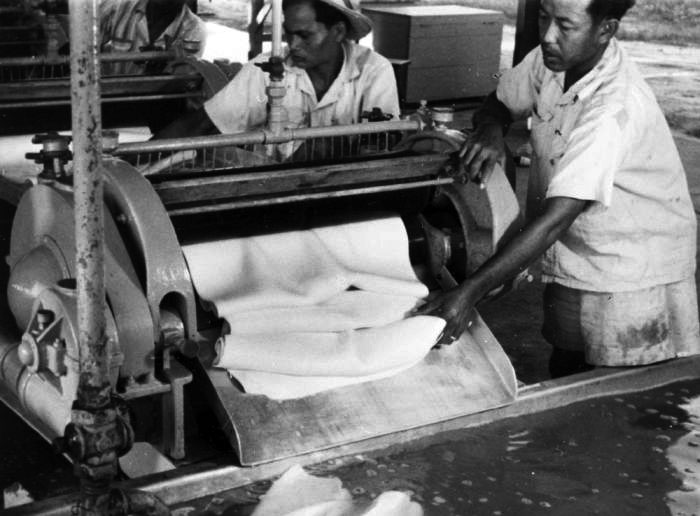 Although independent, Indonesia’ economy was totally subordinate to the needs of imperialism. Economic development brought with it growing industrialisation and thus the development of a modern, fresh proletariat, which was destined to become a key factor in future events.

Petroleum and natural gas had consistently accounted for more than 50 percent of the total export value up until 1987, with Japan being the main export destination[2]. Around 80% of the petroleum and natural gas exports went to Japan and the United States[3]. The period from 1971 to 1987 is often referred to as the migas (oil and gas) period.

Japan has been the most important export market for Indonesian goods, particularly between early 1970s until the end of 1980s, where exports to Japan accounted for shares as high as 40 to 50 percent. Export levels to the US trailed those to Japan, with a combined total value of Japanese and US exports at 60 to 70% from 1971 to 1987.[4] This concentration of exports towards the US and Japan began during the late 1960s, a period that coincides with the annihilation of the Sukarno regime and the PKI forces in 1965-66. This is in line with US foreign policy to assign Indonesia to Japan’s economic sphere of influence.

The dominance of petroleum exports started to decline after peaking in 1981. From the second half of the 1980s, petroleum exports dropped to a level that was only about one-third that of 1981. This decline was caused mainly by the 1980s plunge of international oil prices, otherwise known as the 1980s oil glut, where oil prices dropped from their peak of $35 per barrel in 1980 to below $10 in 1986.

Following the sharp fall in the 1980s, petroleum exports were stagnant in the 1990s. The share of Indonesia’s exports taken up by oil and gas fell to 20% at the end of 1990s. Petroleum was slowly losing its position as Indonesia’s key export commodity. In its place, remarkable increases were seen in plywood exports up to the beginning of the 1990s, in textile and garments in the middle of the decade, and in electronic products in the second half of the 1990s.[5] Indonesia was clearly replacing its export economy based on raw materials to one built on industrial products.

Export markets had also changed at the end of the 1990s, where trade in industrial products with East Asian countries (Korea, Taiwan, and China) other than Japan and the ASEAN countries became a cornerstone of Indonesia’s foreign trade. The trend of Indonesia’s export economy during the period spanning the second half of the 19th century to the 20th century can be summarized in the following table:

During the rubber era of the 1930s and petroleum era of the 1960s, export production was concentrated in the outer islands. However, at the end of the 1980s, there was an increase of exports originating in Java, which had a large workforce and the capacity to produce industrial goods for exports.

The Growth of the Working Class in Indonesia

Indonesia experienced a shift of its key export commodities from agriculture and mining to a variety of manufactured goods. By the late 1980s, manufacturing alone contributed to close to 30% of total GDP growth, in contrast to around a 10% contribution to growth in the late 1960s.[6] Between 1986 and 1993, growth in jobs in large- and medium-scale manufacturing expanded at a rate of 9% per annum.[7] During the same period, jobs in the agriculture sector experienced a decline. Millions of people relocated from the rural areas to the urban areas. This fresh proletariat, thrown in their thousands into the factories, was one of the first forces that rocked the Soeharto regime. The number of recorded strikes rose in the 1990s, from 61 in 1990 to 300 in 1994. A high proportion of the strikes occurred in manufacturing, especially the low-wage textiles, clothing, and footwear industries.[8]

The most common employment status in Indonesia is that of self-employed worker which accounted for 41% of the total in 2007. The self-employed either worked on their own or with the help of unpaid family workers. Hence, these two categories in reality overlap with each other creating a massive informal sector that amounts to around 60-70%, or around 60-70 million people who are forced to create their own meagre employment for lack of jobs available.

In general, we have seen an increase in wage-workers, both regular and casual, from a total of 26.4% in 1986 to 38.5% in 2007, and a corresponding drop in the informal sector workers (self-employed workers and unpaid family workers) from 73% to 58.6%. After the 1997 crisis, there was a slight drop in the regular wage workers to 26% in 2003, but it regained its pre-crisis level by 2005 and then improved to 28% by 2007. We can see that this decline was absorbed by unpaid family workers, as the laid-off workers depended on their family for employment in return for their costs of living. The regular wage worker is more common in manufacturing and services. Over 40 percent of workers in non-agricultural sectors were regular workers, compared with just 6 percent in agriculture. We are also seeing a shift to more regular wage-workers in the agricultural sector, whereas in 1986 only 0.3% of agricultural worker were wage workers, in 2007 they were 5.8%.[11] The proletariat in Indonesia is clearly increasing in numbers as is also their economic position within the capitalist system.

The rapid industrialization has led to a growth of the working class which has also attracted a large layer of women into its ranks. Despite the brutal exploitation and the forceful integration of young girls from the villages into the factories, their jobs and struggles have transformed the lives, social status, and self-confidence of the once “so obedient” Indonesian woman. They are not just passive victims of exploitation and injustice. They have become active agents of their own social change, and very often are more vocal than their male counterparts. Not a few have become leaders of unions and popular struggles.

Another layer of workers which is quite significant are the migrant workers of Indonesia. In 2008, the number of Indonesian migrant workers was about 5.8 million; this number is equivalent to half of the total employment in the medium and large-scale manufacturing sectors.[12] The majority of them are female and work in the informal sectors as housemaids. The rest work in the agricultural and industrial sectors as day labourers. These workers brought in significant amounts of foreign exchange reserves, as much as US$5 billion in 2006[13], which is twice the value of agricultural exports. Although many of them work in atomized conditions due to the nature of housemaids’ work, they have managed to form trade unions to fight for their rights.