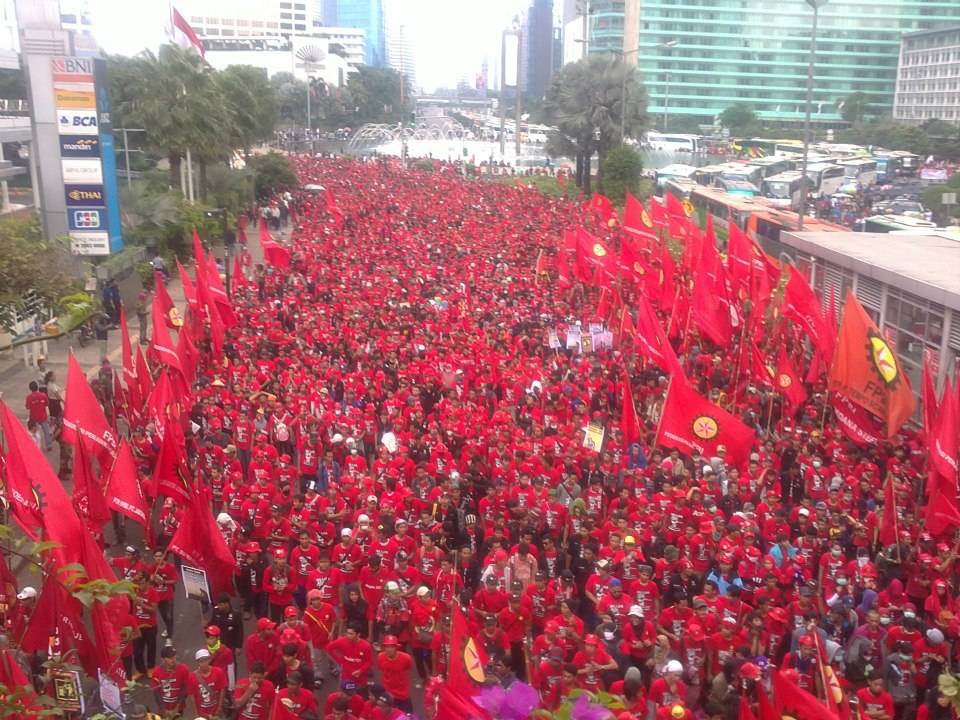 More than 500,000 took to the streets on May Day in what was in effect the second largest general strike in the history of Indonesia. The working class of the 4th largest country in the world is starting to move in a very radical manner as the workers are imbued with confidence from their recent successes.

History is being rewritten in Indonesia at an unprecedented pace as more than five hundred thousand workers took to the streets to celebrate this year’s International Workers’ Day. 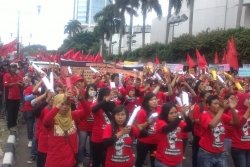 The mass action was nothing short of a national general strike as it happened during working hours. The workers abandoned their factories en masse from 7  in the morning, paralyzing the economy and the city centres. This was the largest May Day demonstration in the history of Indonesian labour movement. As a strike, it has only been matched by the one-million strong general strike in last October – which was the first general strike since 1965 – and the 2012 May Day that saw 160 thousands workers on the street. 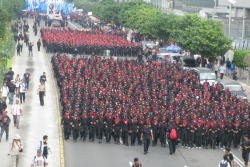 The "Metal Guard" metal workers union marched in formationIn between these massive events a wave of strikes and mass actions has been taking place since late 2011 and is showing no sign of subsiding at all. It started far away from the centres of today’s actions, when the miners in West Papua held out for 3 months in a bitter strike that saw 9 workers shot dead. Then in early 2012 workers from the main industrial zones in West Java began taking radical actions. Not only did they strike, they also blocked highways and organized flying picket lines (which is known as “factory sweeping” or “geruduk pabrik”) to factories where violations of labour laws are known to take place. The workers, who no longer have any illusions in the courts, took matters in their own hand and solved  the questions with direct mass action. 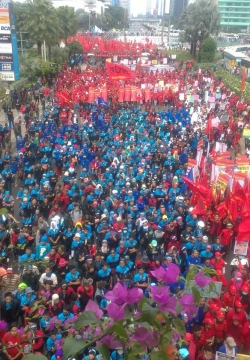 In March 2012, the workers mobilized against the proposed increase in fuel price and managed to force the government to back down. This action was significant because this is the first time the labour movement took up issues that concern the whole country, and won the struggle. This put the working class on the Indonesian political map as a significant force. In less than 15 years since the fall of the dictatorship, the Indonesian working class has asserted itself again.

2012’s May Day was massive and historical. Coming out of the March victory, the workers were filled with confidence they had never felt before. The Council of Indonesian Workers (MPBI) was declared during the 2012 May Day. It united 3 federations and 8 confederations, bringing more than 3 million workers under the same umbrella. There were some doubts at the beginning about this Council since it is made up of yellow unions. Could this alliance be nothing but posturing by these leaders of yellow unions that will disappear within months? However the tide of the labour movement immediately crushed those doubts. The workers always moved through their organizations even if these organizations are reformist, conservative, or even reactionary to begin with. Within a few months the MPBI was preparing for the first national general strike and carried it out on the 3rd of October.

A massive transformation in workers’ consciousness is now taking place en masse. There is now a thirst of ideas amongst the workers. In great numbers workers are attending discussion groups or circlers, learning about things that they were once so averse to study. They have seen their own power and now seek to understand it better.

Help the Indonesian comrades of the IMT publish the works of Trotsky.

The strength of Indonesian workers today can also be glimpsed from the responses from the ruling class. President Yudhoyono has promised to make May 1st a national holiday next year. Facing what is effectively a national general strike, the government feels that it would be better to declare May Day as a national holiday so that any future May Day action will no longer be done or seen as a strike action by the workers. At the same time many factories chose to close their factories yesterday instead of facing the wrath of their workers. Many government officials and bourgeois politicians are now also paying lip service to May Day, “condoning” it but advising that it should take place at designated places where the government will provide them with stages and entertainment from well-known singers and bands. Some even suggested a Fun Bike as a May Day activity. The ruling class can no longer openly oppose the Labour Day. May Day is not only entering the consciousness of the workers, but also the whole toiling masses in Indonesia. The latter is quite important because it is establishing the leadership of the working class.

All indications show that the wave of the labour movement will only be bigger in the coming period. One of the main demands of this year’s May Day is to oppose cuts in fuel subsidy. However, the government has to cut the fuel subsidy and is preparing to do so this year. A showdown is bound to happen this year over this issue. MPBI has also threatened the government and the capitalists that they will organize another general strike this August if their concerns over outsourcing, minimum wage, and health care are not being taken seriously. With a successful general strike and a score of victories under their belt, the next general strike will be nothing less than impressive. This coming period will be a period of turbulence, one that will steel and consolidate the workers for their historic task: the revolutionary taking of power.