China
Share
Tweet
From a situation where there was universal healthcare for the whole population, China has become one of the most unequal countries in the world when it come to access to healthcare. The answer to the growing healthcare problems that the leaders of the so-called Communist Party have come up with is more private healthcare!

Universally accessible, socialized medial care is normally viewed as one of the first measures which socialists try to achieve for the benefit of the people. In many countries today, even in the United States of America many still go without healthcare, or become indebted for life because of illness. Not only does socialized medical care save lives, but it is a basic necessity for creating social and economic equality. 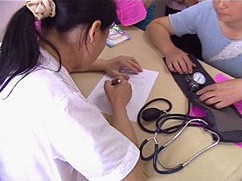 One of the first steps of the Chinese revolution, right from 1949, was to establish a medical system that could reach people throughout the country and be accessible to all. The early steps taken during the Maoist era, while not without mistakes, was a testament to what can be achieved during a revolution in a short period of time and with very little resources. Unfortunately, due to the market orientated policies taken up by the Chinese Communist Party leadership from Deng Xiaoping onwards, the Chinese health service has suffered severely and what was once a great success story has become one of the most unequal health care systems in the world.

During the 1950s, a great effort was made in order to expand healthcare to rural peasants, and far reaching areas which previously had no access to medical personnel. The so called barefoot doctors' initiative is still cited by international medical professionals as being a great success in increasing the health and life expectancy of China's large and dispersed population. From a life expectancy of 32 years in 1950, it had already reached 69 by 1985. Funding for medical treatment was carried out in part through a kind of grass roots insurance system administered through local communes while investment in the healthcare system itself was carried out by the government and state owned enterprises.

The system was not of the highest quality, and was not without its problems, but it allowed the vast majority of the people in China, 80-90% of the population, access to healthcare. Unfortunately, due to the absence of workers' democracy (the dictatorship of the proletariat, as opposed to the dictatorship of the bureaucracy over the proletariat), and the complete domination of the bureaucracy, instead of being expanded and advanced, this system was torn out by its roots, in particular in the latter half of the 1980s with the dismantling of the commune system.

Today we find a very different situation in Chinese health care, more resembling that of a laissez faire model than one of a so called socialist nation. As of 2007, total GDP spent on healthcare was 5.55%. While the health expenditure share of GDP on average across OECD countries remained unchanged in 2006 compared with 2005, at 8.9%. Therefore spending on healthcare in China, as a percentage of GDP, is below the average for the main advanced capitalist countries. More appalling is the fact that even though the government of China now has much more revenue then it did in the past, its share in total health care spending has gone from 36% in 1980 to 17% in 2004. There has been talk recently about increasing the level of funding by the government, but it is always accompanied together with the appeal that it is not the government's responsibility to assure healthcare to all, but the responsibility of individuals. Again, from 1980 to 2004, the percentage of healthcare costs paid by families rose from 21.6% to 53.6%. The government has recently started to discuss changing laws in order to encourage private health insurance, something which is not widely available as yet.

Health coverage is provided through a state health plan to employees of the state owned companies, bureaucrats, and officials. This same programme also partially covers the health expenses of family members. However, this programme only encompasses a small and decreasing part of the population. In 2003, 45% of residents in urban and 80% in rural areas were not covered by any government health plan. Without government or even private sector insurance, these workers and peasants must borrow money from relatives and pay their life savings to doctors that they do not even know if they can trust. In 2005, the government created a basic insurance programme for people living in rural areas, but the coverage, which covers 70-80% for small health issues, which can be dealt with in small clinics, rapidly decreases to 30% for seeing specialists or having to go to city hospitals.

The health service is severely under-regulated. Since hospitals get almost all their funding from the fees which patients pay, there is a built-in incentive for corruption and abuse. There are many complaints about doctors overcharging, performing unnecessary procedures, and prescribing unneeded medications, all to make more money and keep patients coming back. Some of these cases have even led to protests by the communities affected. The government's response so far has been to punish individuals found guilty of such acts instead of trying to deal with the underlying problem which flows from the system that allows these kinds of things to go on in the first place.

Many workers and peasants, including their entire families, go broke in order to pay hospital bills for family members when they become seriously ill. It has become such a problem that some cases have even surfaced of elderly people in rural areas being caught trying to be cremated alive in order to save their families' money. What is the government's proposed solution to this crisis in healthcare? Even more privatisation!

The government now is acknowledging the problem of healthcare, if for no other reason than it is a looming black cloud over their so-called "harmonious [often omitted] socialist society". In 2006, a case of a toddler dying for lack of money caused thousands in southwest Sichuan province to ransack the hospital and battle with police. Hu Jintao, who has been playing the card of social reform in order to avoid social upheaval has been promising to heal the gaping social wounds, but has provided only children's band-aids as a solution! The 2005 insurance plan for covering peasants is completely inadequate for dealing with any serious medical conditions which involve the big expenses anyhow. The government has been licensing private insurance and seems content to go with the market road and let them sort it all out, while the workers and peasants pay more and more on health expenses every year. Since it is the only option for most people not working in state enterprises, private health insurance is growing rapidly.

It is obvious that these are not the policies of a "socialist government", which must as a precondition put the interests of workers and peasants at the forefront of decisions. Most Chinese workers understand what has taken place in the country, that the "capitalist-roaders" have taken over and the economy and society is now oriented along capitalist lines. Hu Jintao, though surely talking more left-wing than his predecessors, has provided no fundamental change for the status of working people in China. Labour conditions are just as bad; abuse by foreign and national companies alike continues the same. The new rich continue to increase their wealth and the workers and poor struggle on through enormous inflation in food prices and basic goods.

Chinese Marxists must again pick up the struggle for socialism, learning from the mistakes of the past in order to build a genuine workers' democracy where industry is state owned, but managed by the workers, not by corrupt bureaucrats. A real socialist government, which Marx and Lenin envisaged, would be one where the workers actually have power by managing their own workplaces, the right to elect and recall all representatives, and where no official or bureaucrat earns more than the average worker. Using the massive wealth and technology China has accumulated, the workers could transform the country in a matter of years. Universal healthcare for all would easily become a reality once the colossal forces of production and human labour power that China possesses are directed for the social good instead of the enrichment of a few bureaucrats and national and international capitalists.