Despite the international corporate media’s relentless propaganda, the gap between the haves and have nots is continuously increasing on a global scale. In spite of what they would like us to believe, what we have before us is a transfer of wealth from the poorer countries to the richer on a scale never seen before in history. 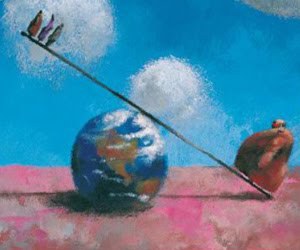 The United Nations and its numerous bodies, the World Bank and International Monetary Fund (IMF) are all running around to highlighting one initiative after another in a farcical manner to show they are doing their best to reduce this curse of poverty. Similarly NGOs and many other similar institutions have become an industry for the elimination of poverty but they have utterly failed to achieve this even in this advanced 21st century. They have become totally self-serving and have a direct interest in the continuation and prolongation of poverty. It is no surprise that every time working people revolt against this poverty, these organisations and institutions are wheeled out to shed crocodile tears and in the process do their utmost to derail and discredit the movements through the use of the national and international corporate media.

Marx wrote in Das Kapital (Volume One) that, “One capitalist always kills many… Along with the constantly diminishing number of the magnates of capital, who usurp and monopolize all advantages of this process of transformation, grows the mass of misery, oppression, slavery, degradation, exploitation; but with this too grows the revolt of the working class, a class always increasing in numbers, and disciplined.”

No matter how hard bourgeois economists try to hide this startling state of affairs, Marx’s predictions have never been true as they are today. The concentration of wealth on a national, regional or continental level is uneven and unequal. Out of a total global wealth ($200 trillion), the share of Africa, India, Latin America and China is 1%, 2%, 4% and 8% respectively. This combined 15% wealth is shared by 4.2 billion people (60%) out of a total world population of 7 billion. On the other hand the share of Europe and North America comes to a staggering 63%, whereas the total population in these two regions is just 1.3 billion (18.6%).

Globally the US is one of the most unequal countries in terms of wealth, where the richest 1% of the population controls $57 trillion dollars or 35% of the wealth, whilst the richest 10% actually controls 80% of the wealth. The bottom 80% only has access to 7% of the wealth. Likewise India is one of the poorest countries but of the 100 richest men in the world, three (Ambani, Mithal and Azam PremJi) come from India, although all their wealth is stashed away in the western world’s banks and offshore financial institutions.

An analysis of economic disparity on a global scale shows that the richest 1% in the world owns 43% of its wealth and the richest 10% of the population controls 83% of the wealth. Furthermore 50% of the poorest has access to just 2% of wealth and 80% of the poorest has only 6% of the world wealth. The richest 300 people in the world have more wealth than the poorest 3 billion. Looking at it from another angle, the richest 200 people in the world have over $2.7 trillion worth of assets whereas the poorest 3.5 billion people have access to a mere $2.2 trillion. Over the last 20 years the income of the top 1% of the population has increased by 60% and since the 2008 crisis this inequity has increased many times over. It does not matter which way one examines this towering inequality and disparity, the end result is harrowingly frightening.

The current period’s most important economic and financial development has been the removal of all national barriers and tariffs to enable a continuous, unstoppable, aggressive and total free flow of finance. This unfettered flow of finance has played a critical role in the current financial meltdown and crisis of capitalism, and has rendered nation states totally impotent at the hands of finance capital.

This situation was correctly characterised by Marx and Engels in their Communist Manifesto in 1848. They had predicted that the evolution of capitalism and its globalization would render nation states impotent. One of the reasons for the ever increasing state debts is that the multinationals and richest people find it very easy to evade paying taxes. This forces states to borrow more and in the process national debts end up increasing at an alarming level. No amount of regulations and laws and attempts to impose taxes on obscene profits, wealth prevent these corporate vultures from transferring this ill-gotten wealth to offshore tax havens. This in turn leads to increasing current account and trade deficits, devaluation of currencies and a worsening economic crisis.

No country on earth is safe from the loot and plunder of the multinational corporations. Multinationals are in the forefront in transferring billions of dollars to offshore tax havens on an annual basis.  To illustrate this point, General Electric, Pfizer, Microsoft, Apple and Merck have transferred $108 billion, $73 billion, $60 billion, $54 billion and $53 billion respectively. Hence, just 60 big corporations have transferred $1,300 billion dollars to these tax havens annually in evading tax laws. According to one estimate, the richest people of the world have deposited $32,000 billion in such tax havens. This amount is 8 times more than the total debt of third world countries, which is around $4,000 billion.

In the developing world the black economy is an important gateway for such monetary transactions. According to India’s national anti-crime body CBI, the richest people of India deposited $500 billion of stolen money in Swiss banks in 2012. The Governor of the State Bank of Pakistan, Yasin Anwar, said on October 2nd that $25 million are being smuggled out of Pakistan on a daily basis. In other words more than $9 billion are taken out on an annual basis. This is 1.5 times more than the IMF bailout package the country will receive over three years with harsh terms and high interest rate. This shows that the character of the bourgeoisie of the developing world is no different than that of imperialist corporations. According to a report from Global Integrity, $197 billion were transferred from the poorest countries like Angola, Ethiopia and Yemen from 1990 to 2008.

Policies and laws (cuts in custom duties, cheap labour and raw materials, overpriced finished goods and technology etc.) imposed by the WTO, IMF and World Bank cost $500 billion to the developing world. In the last decade alone, the multinational companies have grabbed lands in various third world countries equal to an area of the whole of Western Europe. The market price of this land is not less than $2000 billion.

All this serves to underline the fact that capitalism is not the ultimate destiny of humanity. Only through a socialist revolution can this horrible economic disparity end and render humanity free in the true sense of the word.