The nation of Haiti was hit with a devastating earthquake. The governments of Cuba and Venezuela responded within hours with medical brigades, firefighters, fuel and supplies, and there has been massive sympathy, generosity and volunteerism from workers around the world. What a difference compared to the response from the the United States. The U.S. government has pledged assistance in the way of one hundred million dollars – less than is spent on the wars in Iraq and Afghanistan in just two days.

The nation of Haiti was hit with a devastating earthquake, 7.0 in magnitude on January 12th, 2010 at roughly five o'clock in the afternoon Eastern Standard Time. Due to the depths of infrastructural decay known by the world’s first independent black republic, as many as a quarter of a million people have lost their lives in the rubble of sub-standard dwellings. Media reports from numerous international sources as well as many eyewitnesses have documented that the streets of Port -Au-Prince, the country’s capital, are overflowing with the bodies of tens of thousands of people. The governments of Cuba and Venezuela responded within hours with medical brigades, firefighters, fuel and supplies, and there has been massive sympathy, generosity and volunteerism from workers around the world.

What a difference compared to the response from the the United States. The U.S. government has pledged assistance in the way of one hundred million dollars – less than is spent on the wars in Iraq and Afghanistan in just two days. In a clear indication of U.S. imperialism's true intentions, President Barack Obama has also dispatched close to 10,000 troops to “aid and assist” the shattered Haitian government of President René Préval “maintain public order.”

What many observers of this deep tragedy have noted is that the same set of priorities that upset relief efforts during Hurricane Katrina are currently holding sway in Haiti. There have been reports that United States military authorities have taken over the country’s functioning airport, and have actually forced incoming flights with needed medical equipment and food support to Santo Domingo, the capital of the Dominican Republic, which as a neighboring nation shares the island with Haiti. Pacifica’s Democracy Now and the English language Al Jazeera have interviewed Haitians on the ground who have expressed dismay with the current “rescue” effort as overseen by the United States. According to western sources, there have been some rioting and looting incidents in isolated areas, but given the severity of the situation and the delay of needed resource, this is far from a mysterious development. 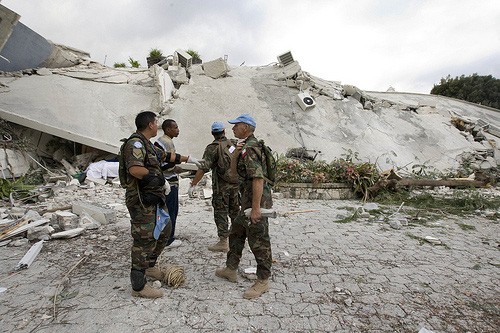 At present, much mainstream media commentary has displayed the usual indifference to the long historical context of abuse that Haiti has suffered from her more powerful neighbor to the north. In the last two decades alone, the United States, under three different presidents, has:

So, from where those of us who are acquainted with Haitian history and culture are standing, the current U.S. government concern for the welfare of Haiti is nothing more than crocodile tears. And (it must be said), the decision by President Barack Obama to appoint the sweatshop baron and NAFTA idea man, Former President Bill Clinton, as well as Former President George W. Bush (accessory to the Aristide kidnapping and overseer of the Katrina disaster) is nothing more but the same old swill on a different day.

The United States and other western governments (most notably the French) have been attempting to reshape the destinies of the Haitian people since this world’s most successful slave rebellion led by Toussaint L’Ouverture and Jacques Dessalines defeated the Napoleonic military machine in 1804. Haiti has been forced to live with prohibitive international debt payments, embargoes, and numerous invasions, occupations, and U.S. sponsored military dictatorships – among which we may include the notorious Duvalier Regime, both father and son – for the simple crime of displacing one of the planet’s most intrusive empires over 200 years ago.

Recent reports indicate that the country has suffered a round of aftershocks that may further impede progress in the recovery effort. It is now of the first order that Marxists be “up” on this long U.S. torment of a resourceful and dynamic people. If the current media blather from U.S. ruling class authorities is any indicator of what is to come, the United States is getting ready to take this deep human tragedy, and try again to fix Haiti in spite of itself. Be very sure that the watchwords for this effort will be the old imperial maxim, “If it ain’t broke, fix it till it is”. It is very true to say that the generous donations of U.S. workers are of immense help to the Haitian people when such donations actually reach them, but that’s a very different kettle of fish than what the old imperial order of the U.S. will offer them.

The only real solution to Haiti’s problem is the revolutionary overthrow of the rotten capitalist system, led by the working class of Haiti and of the entire region, beginning with the Dominican Republic, and it will not be long until they are heard from. The International Marxist Tendency will present an in depth analysis of the current Haitian crisis and the Haitian question throughout history in the coming days.