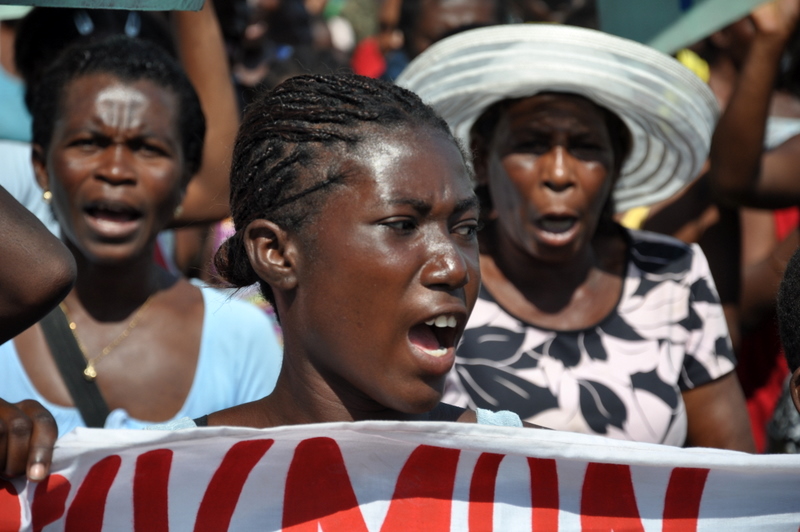 This article was produced in Spanish some weeks before the coronavirus pandemic, which has obviously affected the situation in Haiti. There are around 70 confirmed cases in the country, and its fragile healthcare system means the virus could have a catastrophic impact if it takes hold. The hated president Jovenel Möise declared a state of emergency and lockdown in March. Protests continued all the way up to the lockdown, and violent clashes between the army and police over pay disrupted carnival in February, showing splits in the repressive state apparatus. Clearly, none of the fundamental issues have changed since this piece was written.

The constant cycle of demonstrations against the Haitian government and its austerity measures has intensified in recent years. More than 5.5 million citizens have mobilised since July 2018 when a general strike was declared in rejection of the government's announcement to increase fuel prices. With the deepening of the crisis, protesters now demand the resignation of President Jovenel Möise, the formation of a transitional government, the approval of a new constitution and finally an end to the energy crisis that, as always, affects the poorest layers of the working class.

A struggle since the nineteenth century

Haiti is of political and historical importance. In 1791, the natives – along with the African slaves – rebelled against French occupation, making it the first free republic on the American continent in 1804. However, independence came at a considerable price, with a significant debt imposed on them by the French Empire in 1825, alongside severe isolation from the outside world, lasting almost a century. In addition to an already precarious and vulnerable position, the American invasion (1915-1943) which sought to gain economic and political control of the country led to the brutal dictatorship of Francois and Jean-Claude Duvalier in the second half of the twentieth century, as well as a subsequent occupation by UN forces. 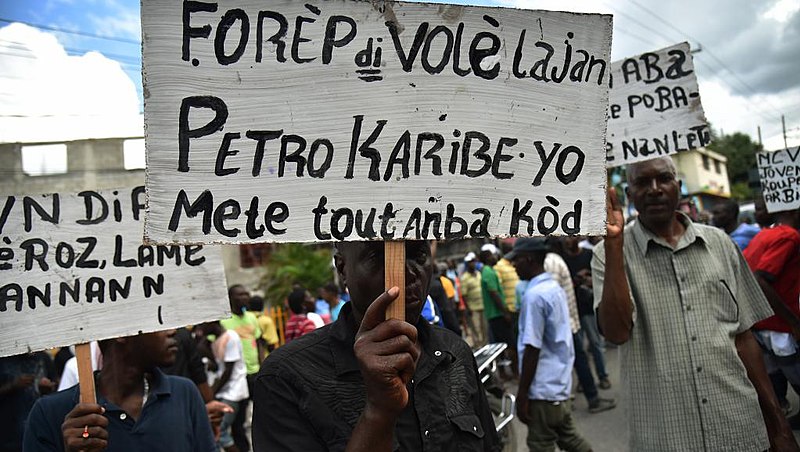 Since winning liberation in 1804, the history of Haiti has been one of ceaseless struggle against imperialist domination / Image: Medyalokal

With the overthrow of the Duvalier dictatorship in 1986, progressives believed that the transformation of the country would be possible. From a system of repressive and predatory kleptocracy, to a lawful and developing state. To that end, a  new constitution was approved in a referendum in 1987, and the Universal Declaration of Human Rights was introduced. However, the first free elections in that year were strongly repressed with a bloodbath backed by the vultures of the US State Department. Similarly, with the first electoral triumph of the radical priest Jean-Bertrand Aristide in 1990, the military took power and the dictatorship remained in force by other means.

Deplorable conditions were suffered by the many on the one hand, while the few multiplied their wealth through private enterprise and positions in the government on the other. The substitution of local production (especially agricultural production) with imports further accentuated Haiti's dependence on dominant countries and international "aid."

Since the overthrow of the Duvaliers, foreign interventionists have been seeking to impose a stable government in Haiti that protects their investments in the country. Yet, that remains a very difficult task in no small part due to the revolutionary traditions of the Haitian people. The Haitian bourgeoisie are in fact considerably weak, incompetent and parasitic; only sustained thanks to the support of their imperialist masters. Therefore, the confrontation of the population against the national bourgeoisie and against foreign thieves has been a constant theme in recent decades. It should be remembered that the popular uprising against the Duvalier dictatorship inspired the Venezuelan cacerolazo (pot banging protest) of 1989, and the Bolivarian Revolution led by Hugo Chávez in Venezuela. In Haiti there have been eight coups and eight foreign occupations, including by the UN forces that still continue to control the Haitian people.

Obscene levels of inequality have made Haiti the most vulnerable country in the Western Hemisphere. The 2010 earthquake destroyed much of the country and left more than 300,000 dead and 1.5 million displaced. Furthermore, Hurricane Matthew in 2016 left 500 people dead, and more than a million were left without shelter. 10 years have passed since the earthquake and four since the hurricane, and yet, despite the billions spent on humanitarian assistance there are still thousands of Haitians living in temporary shelters.

The UN, the international community and humanitarian assistance 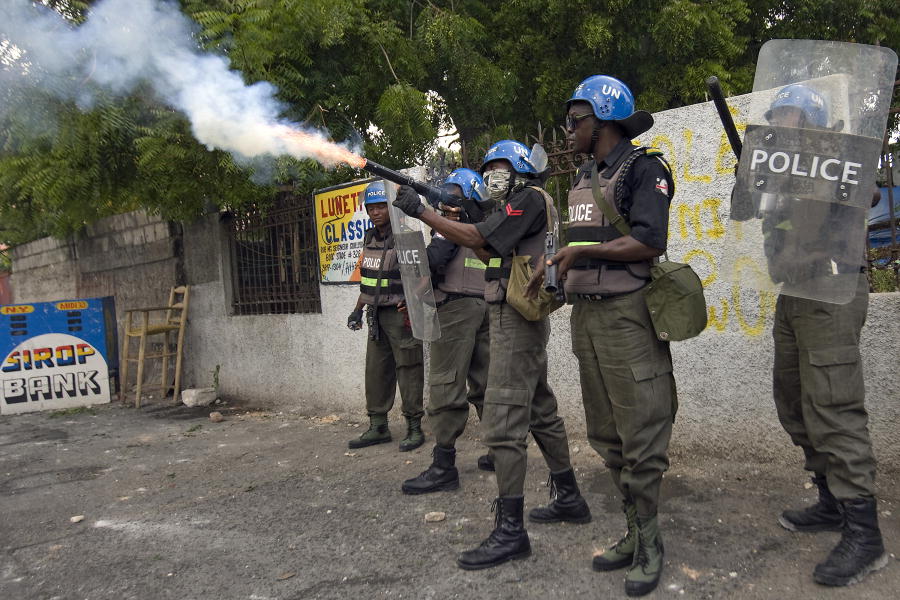 The UN 'peacekeeping force' in Haiti has subjected the population to disease and abuse / Image: United Nations Photo, Flickr

Under the pretext of maintaining peace after the armed conflict in 2004 that forced Aristide to resign the presidency for the second time, the United Nations’ “Mission for Stabilisation in Haiti” (MINUSTAH) was established: an international security body composed of 7,000 military personnel from countries around the world, including El Salvador.

Lenin said that the state is a special body of armed men defending the capital of a minority. In Haiti, the military sent by the UN have been the international bullies that protect the businesses of foreign and national capitalists. While they remained “watching over peace,” these famous blue helmets wreaked havoc on the population. For instance, according to a study by researchers at the University of Birmingham published last year, 2,000 Haitian women (many of them pregnant) and even 11-year-old girls were sexually abused and abandoned by these brave military men, taking advantage of the miserable conditions of these women. These foreign soldiers are also responsible for the importation of the vibrio cholerae strain from Nepal, triggering a cholera epidemic in Haiti that claimed the lives of 9,792 people. This is not to mention the massacres that they carried out during the occupation that apparently ended in 2017, but were continued by the MINUJUSTH (UN Mission for Justice Support in Haiti) and more recently by the BINUH (United Nations Integrated Office in Haitibinuh).

The international community, contrary to its official discourse of contributing to the development of Haiti, is one of the main factors that aggravates misery via the management of humanitarian assistance. The billions of dollars announced in each emergency assistance programme or reconstruction are granted to international agencies that hire inexperienced and incapable people. Thus, the conditions of poverty and vulnerability of the population only become more acute under their care.

Jovenel Möise, known as "the banana king", is a banana exporter, champion of free trade and agent of the imperialists. He was elected president in 2016 by just 11 percent of the population in a vote that had to be repeated after evidence of widespread fraud, but was backed by foreign observers, claiming victory in both elections. One of Möise's first measures as president was to sign a loan with the International Monetary Fund for $96 million in exchange for the privatisation of energy and the subsequent elimination of fuel and electricity subsidies.

Yet, the spark that set alight the wrath of the masses was the cuts to fuel subsidies in 2018 as the World Cup played on. This quickly spread across the country, paralysing it and pressuring the government to the point where Prime Minister Jack Guy Lafontanty had to resign and Möise was forced to suspend the cuts.

Another of the triggers for the current crisis was the unveiling of embezzlement of approximately $2 billion by the state from the energy cooperation agreement with Petrocaribe by officials of former President Martelly. This, of course, includes President Möise himself for whom his prosecution is now demanded. Thus, while Haiti received oil at a preferential cost from Venezuela and saved $2 billion, that same money was distributed among the ruling class through bureaucratic mechanisms.

Protests have been raging for months to get rid of the hated president, "Banana King" Jovenel Möise / Image: JovansLorquet

The above is linked to the energy crisis, which translates as fuel shortages, largely due to the departure of Haiti from Petrocaribe, and its current alignment with the United States and its sanctions on Venezuela. Now Haiti can no longer buy cheap oil from the South American country and has no funds to buy from other oil-producing countries. Prices are on the rise, smuggling is rampant and the economy is paralysed.

Against the perpetuation of all these measures (with the complicity of a ruling class, which does not direct anything, but only follows foreign guidelines), the Haitian people have risen into permanent radical insurrection, not only demanding the resignation of President Möise and his cabinet, but also demanding systemic change. Chavire chodye (turn everything upside-down) is an example of the slogans from the demonstrations. The Petrochallengers youth movement has successfully called mass marches since last September, joining other popular organisations and opposition parties such as the Popular Democratic Movement (MDP). They have deployed strategies like the Peyi Lok operation (blocked country), which has paralysed the transit of goods and people between provinces.

The initial response of the government to the crisis was silence over the chaos that broke out in the country. However, after a month, the government began to convene meetings with the opposition, but that failed due to the government’s disrepute. Consequently, repression of protesters by the security forces and the propagation of paramilitary groups sponsored by national and foreign officials have been unleashed, leading to 77 deaths in 2018.

Möise's tenure in power can only be explained by an agreement established with Donald Trump and his anti-Venezuela policy, in addition to the support of the Core Group formed by diplomats from countries with interests in Haiti. Therefore, one of the demands of the movement is the cessation of foreign interference by the capitalists in Haiti.

The solution of the crisis can only come from the Haitian people. Now, the masses must strengthen their level of popular organisation in the cities and in the countryside to face the misery of the prevailing capitalist system. They must maintain this mobilisation and declare an indefinite, general strike until the overthrow of Möise, expel the agents of the imperialist nations and establish a government of the people to face these problems that have been dragging on for centuries.