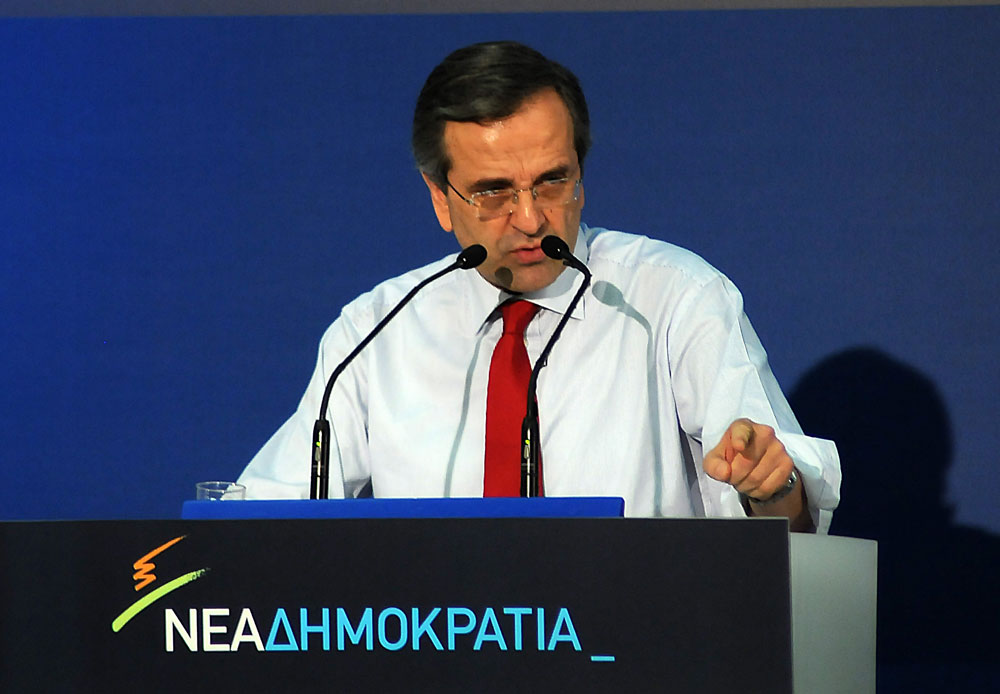 The Greek and international bourgeois media orchestrated a huge terror campaign, painting a picture of economic chaos and collapse if Syriza were to win the elections. Thus by a small margin New Democracy (ND) scraped into first place. However, the rise of Syriza, despite all this, indicates the continuing shift to the left in Greek society. Now ND will attempt to form a coalition government with the PASOK, which will be one of continued austerity. Nothing has been solved; the problem has only been postponed. All the conditions are being prepared for a victory of Syriza in the near future. Here we publish an analysis on the elections, written by the Greek Marxists in the course of today.

The results of yesterday's parliamentary elections are a "fragile" political victory for the Greek ruling class. Meanwhile we see a massive shift of the working masses towards Syriza in the major cities, among the working class, the very young and the productive. Among these layers there was a veritable avalanche of support for Syriza

New Democracy (ND) ranked first winning 29.66% and approximately 1,825,000 votes. They won nearly 635,000 votes more compared to the elections of 6th May and an almost 11% increase. Of the 52 constituencies, ND came first in 36, including the A district in Athens, the A and B of Thessaloniki and A of Piraeus. According to the figures provided by the various exit polls of the television stations, the main age group of ND voters is to be found in the over-55s, among whom ND won 39%. But among the 18-34 year olds ND won only 20% and the 35-54 year olds won 24%.

The electoral recovery of ND is mainly due to the massive terror campaign conducted by all the sections of the bourgeoisie, with the full support of the traitors of the communist movement, the leaders of the Democratic Left, with their main slogan "A vote for SYRIZA = a return to the drachma and economic disaster". This dirty campaign got an echo within those traditional conservative layers of Greek society, which their economic situation and position predisposes them to fear "adventures" or "uncertainty" created by the unusual prospect of a government by a party from within the communist movement.

Apart from the capitalists and owners of large incomes and property, these layers are on the one side those who still enjoy "middle-class" incomes, and still have significant savings from the past, owning assets and also generally profitable small properties, and on the other side those whose livelihood directly depends on state revenues, such as pensioners and permanent civil servants. As is shown clearly by the election result, the leadership of Syriza failed to convince this latter category that the abolition of the Memorandum and the general programme of the party could directly ensure their current income.

One factor that particularly favoured New Democracy was the unexpectedly high abstention rate of 37.5%, or 2.5% more than May 6. It is true that great economic hardship was once a barrier to the movement of voters who live far from where they are officially registered to vote, especially in the small towns and villages in the rural areas. But such a high abstention rate, in such a critical and polarized election, can only reflect a real, albeit minority, trend of political apathy, mainly among the youth in these areas, which largely reflects a lack of trust in the government alternative programme, put forward by the Syriza leadership.

Syriza, however, objectively speaking is the great winner of these elections. It won second place with 26.9% and about 1,655,000 votes. In just one month it won almost a further 10% of the overall electorate and approximately 600,000 votes, reflecting the rapidly growing strength of the left, the fastest growth of the left not only in modern Greek political history, but probably in modern political history of the capitalist world as a whole. The key point, however, is that this shift is within the most active and the most progressive sections of Greek society: the working class, together with the majority of unemployed, the youth and in general, the bulk of the electorate in the major urban centres and among those age groups that are productively active.

According to the TV exit polls, in the 18-34 year olds Syriza won 33%, and among the 35-54 year olds, Syriza won 34%. The strength of Syriza in the main urban areas speaks for itself. Overall in Attica (Athens-Piraeus) Syriza came first with about 600,000 votes, compared to 406,667 in May, the map in those areas which are at the heart of economic and political life of the country has been painted red.

All these results confirm the assessment that we made immediately after the elections on 6 May that Syriza is becoming the undisputed political voice of the broad masses of the working class.

Syriza is now the new mass workers' party of Greece.

And this dynamic cannot be stopped, unless the leadership makes some serious mistakes. This leadership, no doubt – and we Marxists are the last to deny this – has contributed with its overall positive stance to date in the development of Syriza's influence within society

Why SYRIZA lost the elections

However, we do need to ask ourselves as to why Syriza did not come top of the polls, disappointing the great hopes of millions of workers and youth? The causes are to be found in a combination of objective and subjective elements.

Objectively, the political correlation of forces, from the very first moment was stacked against SYRIZA. New Democracy, with all the other right-wing parties backing it, the leaders of PASOK and Democratic Left, all Greek SME supporters of the troika, together with the major international media set up jointly a powerful terror campaign against Syriza, targeting the petty bourgeois and more politically backward layers of Greek society.

Also, we have to consider as factors that explain the number of people who feared the prospect of Syriza forming a government, both the conservative tendencies and fears of chaos in the rural households and the elderly – particularly in the provinces – faced with what they believed was the "destabilizing" prospect of a conflict with the Troika over the Memoranda, together with the existence of political apathy among a certain layer, mainly among the younger voters.

However, the leadership of Syriza should and could have faced up to all this and found the appropriate political solution.

The dirty campaign of the bourgeois politicians, media and the troika should have received an immediate response, as we have already explained previously, with a serious effort to mobilize the members of Syriza in the workplaces, in the urban neighbourhoods and in villages, with the aim of organising thousands of new fighters for this battle.

Instead of dedicating energy to this vital task, the election campaign was limited to badly organised local gatherings – discussions that were described incorrectly as "popular assemblies". Instead of developing stronger electoral campaigning, they maintained a routine approach with tired old members and supporters with clipboards. All the "prominent leaders" put their efforts into participating in TV panels, instead of going down to the ranks and organising mass campaign in the neighbourhoods. Syriza, from an organisational point of view thus appeared as having a very weak electoral apparatus, and not one that could mobilize the thousands of fighters it had encountered in recent weeks. Syriza’s apparatus considered them as mere voters and did not try to boldly and decisively organize them so as to strengthen the forces of the party at rank and file level.

The programme presented by the leadership – without any serious discussions with the rank and file – gave some hope to the workers, but it was not the nesesary for giving them enthusiasm and the certanty that this can solve their problems and it was not enough in terms of an effective policy to answer the fears and anxieties of thousands of petty bourgeois, pensioners and unemployed youth.

The leadership of Syriza failed to convince the majority of the people that its programme and the cancellation of the Memoranda of austerity could be applied "peacefully and safely" while remaining within the euro and at the same time it also failed to convince a large part of the people that the EU's threat to expel Greece from the euro was a “bluff”. Faced with the real risk of a generalized economic declaration of war on the part of international and local capital against a future government of the Left, the leadership, instead of responding with a comprehensive and openly expressed programmatic plan, rushed to calm and reassure people with the simple statement that they "would not dare" do such a thing. Even worse, the leadership spoke of plans that were “not reportable!” (Press conference by Tsipras, 12 June). A hostile bourgeois campaign based on fear, can never be answered with vague and abstract positions that leave room for even more fear to grow!

Instead of adopting this approach, the leadership should have patiently and insistently explained the need for a comprehensive programme for the nationalisation under democratic workers’ control and management of the commanding heights of the economy as part of a centralised plan. The plain truth is that without the establishment of a socialised, democratically planned economy, the survival of the people and the paying of wages and pensions – in spite of what the leaders may say – is not at all assured under capitalism.

Also, the hundreds of thousands of unemployed young people did not feel at all assured that the programme presented by the leadership of Syriza was sufficient to combat unemployment. Instead of proposing to increase unemployment benefit by 100 euro and granting it one year earlier, the leadership of Syriza – as we pointed out in an earlier article – should have raised that long-established demand of the labour movement, a reduction in working hours without loss of pay, so that the unemployed would have seen that there was a reasonable expectation that a Left government would be able to provide them with jobs immediately. In defending such a demand, Syriza would have been able to show to the unemployed just how reactionary this system of capitalist anarchy is, a system which condemns them to chronic poverty, and this would have helped them to understand that the only realistic option to live in dignity is to establish a socialised democratically planned economy.

[Note: we will publish more material on Greece in the coming days]