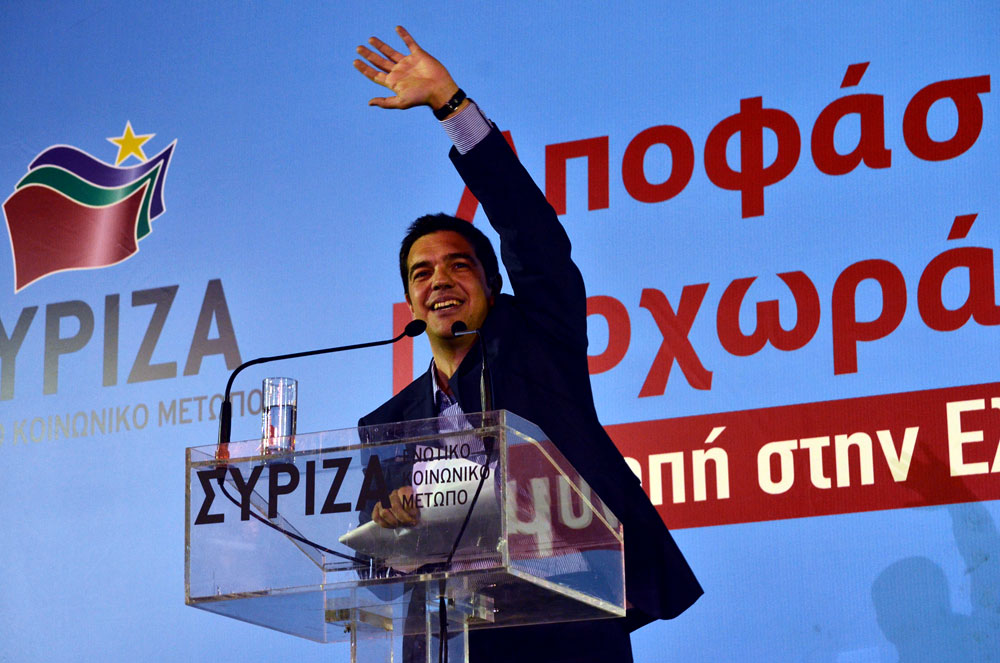 The conclusions we can draw from our analysis is that SYRIZA could have won the elections if the leadership had been equipped with the appropriate programme of action in the election campaign and, above all, if it had had the right political agenda. However, it is also true that what we have accomplished so far is by no means negligible!

This is the first time since the 24.2% won by EDA in 1958, [EDA was the then KKE front] that a party from within the communist movement has won such a high percentage in elections, breaking a historic barrier and revealing that the ideas of genuine socialism have the potential to become a majority in society.

Within a few weeks, the ruling class has had to come to terms with the presence of a strong political opponent and the workers have emerged as the most powerful political force that can change society. This truly great step forward must not be allowed to be drowned in words and feelings of frustration for having only won second place. We must base ourselves on this big step forward to strengthen our struggle and prepare for power.

This is not the place or time for shedding "tears" or cursing, especially those sections of the working people who did not vote for us. The political mistakes we made are very clear to see and we must correct them. The urgent task of the day is to dedicate ourselves to the struggle to build a mass, revolutionary Syriza as a valid tool in the hands of the masses for the socialist transformation of society!

The results of the other parties

Syriza’s failure to win was a natural consequence of PASOK and the Democratic Left holding on to their votes. But this was not due to the "leadership" of Venizelos or Kouvelis, as the bourgeois media have been trying to convince us. It was an expression of the political weakness of the leadership of Syriza and its inability to politically convince enough workers and petty bourgeois layers to be elected to government. If the leadership had presented a clear socialist programme, then the vote of the PASOK and Democratic Left would have collapsed, the first to single digits and the second to a level that would have meant they would not have received any MPs at all.

PASOK compared to May’s 41seats won 33; it’s vote in percentage terms went down to 12.28% from its previous 13.18% and its votes in absolute terms went down to 755,832 compared to its previous 833,527. However, in areas such as Attica (Athens, Piraeus...) it remained at desperately low single digit levels of 7-8%, and it remained below its national level in Thessaloniki and Patras, and its downward trend was also noticeable in other cities around the country. All this demonstrated that it is finished as the leading party of the working masses in the country.

The Democratic Left compared won 17 seats compared to the 19 it won in May, with 6.26% compared to the previous 6.11% and an overall number of votes of 385,079 compared to the previous 386,273. Thus, the ruling class was able to issue a sigh of relief in seeing the survival of this precious left "fig leaf" for a government that will impose anti-working class austerity measures. However, with both the Democratic Left and PASOK willingly participating or supporting a new government of the Troika and of the Greek bourgeoisie, they will inevitably see electoral base being whittled away. With a different programme on the part of the leadership of Syriza, this could have been achieved without the need for the workers to have to go through the painful experience of a new coalition with the same programme as that of Papademos, but under the new prime minister Samaras.

The Independent Greeks revealed signs of serious decline, confirming that it is an opportunist demagogic bourgeois party, which attempted to cash in on the "anti-Memorandum" mood among the mass of people. Compared to May’s elections its seats went down to 20 seats from its previous 31, while in percentage terms its vote went down to 7.51% from 10.61%, and its overall number of votes in absolute terms went down to 462,456 from 670,957. It is clear that the ruling class will put immense pressure on the volatile bourgeois careerists of this party to support a government led by Samaras and to go back to the ND. This pressure will reveal, as was the case with Samaras, that no bourgeois party can honestly and consistently oppose the fierce austerity of the Memoranda.

Unfortunately, the neo-Nazi "Golden Dawn" proved to be particularly resilient. Compared to the May elections it won 18 seats instead of 21 seats, with 6.92% instead of 6.97% and 425,000 votes compared to 441,000 votes. Despite the full, public exposure of the true face of the Golden Dawn in the recent TV chat show when the infamous Kasidiari physically attacked Liana P. Kanellis, this fascist formation managed to keep its votes. The irreversible decline of the far-right LAOS, together with the feeling of desperation among the most politically backward layers and the impact of the capitalist crisis on layers of the petit bourgeoisie, have all opened up space for the Greek neo-Nazis. The revelations of high levels of corruption in the bourgeois parliamentary system, as well as the creation of ghettos of impoverished immigrants in Athens and other major cities, has given the opportunity to the Golden Dawn to reap electoral benefits from a crude anti-parliamentary disposition of the petit bourgeois and "lumpenised" unemployed, mainly youth, who have no memory or experience of the 1967-74 Colonels’ junta and even less of the Nazi occupation during the Second World War. For now, however, there is not a strong current to the far right and facism. Unquestionably, the most powerful social current is towards the left and especially towards SYRIZA.

The dozens of attacks against leftist activists during the election campaign stress the need for a united fighting front of the Left and the trade unions against the Nazis. Only such action can put the brakes on the growing terror of the Golden Dawn. The Golden will clearly be feeling encouraged after its electoral success and will escalate its campaign of anti-immigrant attacks and also its violence against left activists. Pro-fascist nuclei within the state will provide even greater cover for them. In the final analysis only the quickest coming to power possible of a United Left Government, which would dissolve the reactionary and repressive apparatus of the current state and provide a revolutionary programme to solve the problems of the unemployed and the petty bourgeoisie, can a solution be found that would erode the social base of the Golden Dawn and provide for a political set up where the outlawing of all fascist formations would be possible.