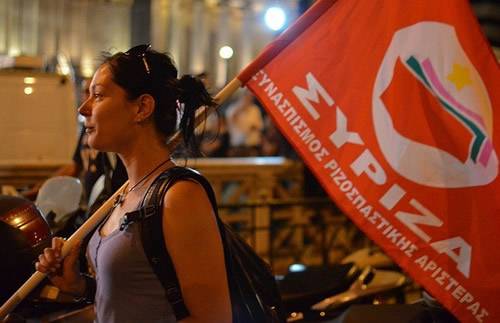 Last week several thousand gold miners marched in Athens against the government (the media claimed there were 6,000 protesters, although this is visibly an exaggeration). They were demonstrating against the government’s plans to close the Skouries gold mine in Chalkidiki, owned by the Canadian mining company El Dorado and also partly by Greek investors.

In the past years, there had been strong opposition by the local residents of Chalkidiki and the environmentalist movement against the mine, in what had become a cause célèbre for the Greek left. This is a polluting open cast mine located in a forested area, in a region that is renowned for its natural beauty.

There are also concerns about the impact the mine could have on the health of the local population. Specifically, there are fears of cyanide pollution of local water bodies. Syriza has promised to stop the development of the mine, but it has also claimed that it will respect legal commitments and so far it has failed to take any decisive measures.

The miners’ opposition to the closure of the mine was then taken up and manipulated by reactionaries. The protests were organised from beginning to end by the mine-owners, which include shadowy figures such as the Bobolas family of oligarchs (one of whose members, Leonidas Bobolas, was arrested on Wednesday for multi-million tax evasion). 27 MPs of the right-wing party New Democracy delivered a threatening statement to minister Lafazanis where they warned of the “escalation of social conflict” and of possible “loss of life” in the future. Not only that, but the former minister of health and pseudo-fascist member of the far right LAOS party, Antonis Georgiadis had the cheek to appear on the demonstration donning a miners’ helmet!

These are somewhat uncanny champions of the cause of labour, to say the least, having been in government in recent years slashing working conditions and devastating the living standards of Greek workers. The truth is that they are not concerned in the least about the miners (although they may feel some concern about the owners of the mine, considering their history of shady connections with mining corporations). This, however, has not stopped them from opportunistically seizing the chance to escalate the pressure against Syriza and mobilise the more backward layers of the population against the government on the streets.

This calls to mind the strike by the yellow unions of the Chilean copper miners of El Teniente in May and June of 1973, sponsored and encouraged by the ruling class, against the left-wing government of Salvador Allende. In the coming months, we are likely to see more such provocations by the ruling classes against the Greek government.
Syriza must continue to mobilise its base of support, rekindling the enthusiasm that was generated in the first weeks after the January elections, which saw spontaneous demonstrations backing Syriza and the creation of citizens’ committees in support of the government, with broad layers of society, including the middle classes and former right-wing voters, speaking out in defence of the government, which enjoyed approval ratings of over 80%.

However, what must also be pointed out is that the demonstration of the miners reflects the genuine concerns by the more backward and vacillating layers of the working class. The gold miners are complaining that if the mine is closed, they will be left jobless in a country where one in four workers is unemployed. If Syriza continues to waver as it has been doing so far, promising on the one hand ambitious social reforms and on the other reassuring bankers and the capitalists that their interests will be respected, and, in the meantime, is both unable to deliver on its promises and continues to unnerve the capitalists, it will generate confusion and sow demoralisation among the middle class and the least resolute layers of the working class. In this context, the  ruling class will be able to mobilise some of those layers against the government.

Tsipras must back his words with deeds and take bold measures for the implementation of the Salonika programme on which he was elected. This necessarily entails a break with the capitalists and the expropriation of the commanding heights of the economy, including big corporations like El Dorado, in order to start planning the economy in the interests of the people. In such circumstances, the government would have the resources to offer an alternative to the gold miners.

The experience of the Allende government must be remembered. Its attempts to appease the capitalists while delivering reforms created economic instability and sowed confusion among its supporters. The middle classes and layers of the working class, especially the “labour aristocracy” of the copper mines, began to mobilise against Allende, who at the same time failed to muster his supporters, fearful of further provoking the ruling class. In the end, the army stepped in to restore capitalist order, and a bloody right-wing dictatorship ensued that was to last almost twenty years.

While the balance of class forces within Greece and the weakness of imperialism make such a violent counter-revolution highly unlikely in Greece today, if Syriza continues to waver, the ruling class can exert pressure both on the streets and in the economic realm to undermine the government. Tsipras would do well to bear in mind the famous quote from German revolutionary Georg Büchner: “Whoever finishes a revolution only halfway, digs his own grave.”