Details
the editorial board of “Marxistiki Foni”
14 June 2006

Greece
Share
Tweet
Greece is being rocked by the biggest student mobilisations for more than 20 years. Faculties have been occupied all over the country and the movement is instinctively turning to the workers for help, calling on the unions to organise a general strike.

Over the last three weeks Greek society has been shaken to its very foundations by the biggest mobilisation of University students since 1981. Now this movement is at its peak with 345 University Faculties under occupation. A total of 100,000 students have taken part in the biggest student assemblies of the last ten years. We have also witnessed massive demonstrations, the biggest of which took place last Thursday with over 40,000 students marching through the centre of Athens.

The spark that provoked this movement is a new law on the Universities, which is aimed at transforming the Universities into private companies with managers. The new law would exclude the students from any say in matters. Already students are forced to take jobs to finance their studies, giving them very little time for anything else.

Another important element in sparking off this movement has been the decision of the New Democracy government to change the Constitution so as to allow the setting up of private universities. However, although these are important elements, the real underlying reason for this movement is the accumulation of pressure on the living standards of the workers and poor families in Greece, under constant attack from the government and the Greek bourgeoisie.

This movement is an eloquent answer to all those petit-bourgeois intellectuals who have characterized the youth as apathetic and apolitical. The events of the past few weeks have shown how things can move very quickly. Once the movement took off there was a rapid interest on the part of the youth in the Universities in politics with a massive turn to the left.

We are faced here with a sudden and sharp turning point. An important role in this has been that of the police, which has used brutally oppressive measures with many students being arrested and many injured and taken to hospital. This has revealed the real nature of the bourgeois state in the eyes of thousands of young people and has also brought the majority of society to sympathise with the students.

Initially the leadership of the movement was dominated by independent left groups and the student wing of the Synaspismos party. Initially the leadership of the KKE (Communist Party) student front came out against the movement, but when they found that their own the rank and file was spontaneously taking part they had to change their position. The PASOK leadership has not uttered a word of support for the movement. In fact, for some time its position has been in favour of the creation of private Universities. The student front of the PASOK in the Universities is now divided, with some supporting the movement and some not. 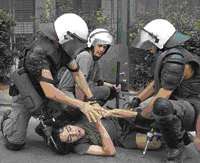 On Thursday of this week, a new demonstration has been called. We believe that it is going to be even bigger than the previous one. The Marxist tendency in Greece gathered around the paper "Marxistiki Foni" is intervening actively in the movement in three areas, Athens, Chalkida and Komotini. We have also been present on all the big demonstrations and we are intervening in the assemblies in six Universities Faculties. Our main emphasis is to pose the question of linking up the student movement with the working class and the need for a general strike in defence of state education.