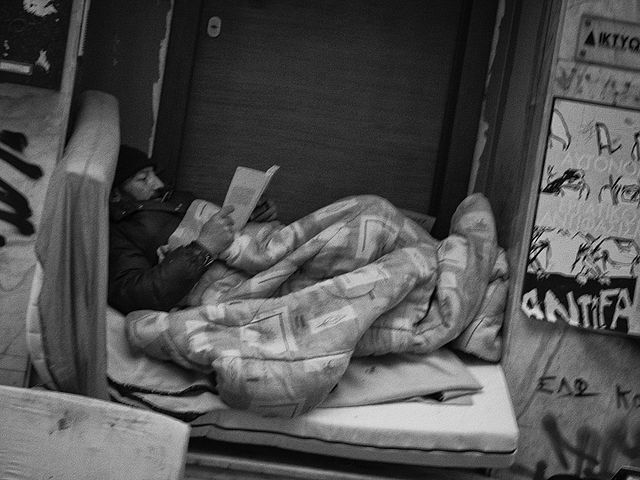 The suffering of the Greek people is deep, very deep. Austerity is pushing larger and larger sections of the population into poverty. With this comes also a seriously worsening healthcare situation which is a direct consequence of the cuts imposed by the Troika, and suicides have also been going up in line with the increase in unemployment.

The crisis of European capitalism is at its acutest in Greece. Whereas many European countries have been in recession and climbed back out of it – although now they are being dragged back down again – Greece has been in a state of almost permanent recession since 2008. In effect the Greek economy has been through an economic contraction comparable to that of the Great Depression in the USA in the 1930s.

The Greek economy entered into crisis in 2008 and since then overall GDP has fallen by 25%. As a result official unemployment last year stood at close to 30%, with youth unemployment shooting above the 50% mark. Long term unemployment has become a serious problem, and this aggravates the social crisis even further as after two years of being without a job there also comes a loss of health insurance, which affects people’s ability to have regular health checks. This is leading to a worsening of people’s health, producing unnecessary illness and even death.

We now have the phenomenon where whole families survive on the meagre pension of a parent or grandparent. I saw when report when I was in Greece of an old woman who was keeping not just her son, but also her son’s family! The point is that, according to Greek government figures, 45% of pensioners are on monthly pensions below €655, which is considered the poverty line. And according to Eurostat figures between 2008 and 2013, on average, Greeks became 40% poorer.

The loss of health insurance is affecting up to 800,000 people according to some estimates [source]. And spending per capita on healthcare has gone down sharply in Greece from around $3000 in 2008 to $2500 in 2013 [World Bank sources].

In the same period serious cases of depression have almost tripled, while cases of suicide have increased by one third, with men of working age being particularly affected. And precisely when we have such a dramatic increase in mental health problems, spending on this sector has been more than halved.

Two prestigious medical journals have published articles on this problem, The Lancet, Greece’s health crisis: from austerity to denialism, and the BMJ Open (originally the British Medical Journal), What has happened to suicides during the Greek economic crisis? Findings from an ecological study of suicides and their determinants (2003–2012). The two articles analyse the impact of the present economic crisis on the health of the Greek people and draw very clear and unambiguous conclusions. BMJ Open actually refers to the phenomenon of “denialism”, i.e. to attempts to refuse what is blatantly obvious, the fact that if you cut public spending, cut wages and reduce jobs, and also spend less on healthcare, then more people are going to get ill and more people are going to commit suicide as they are thrown into desperate conditions.

The Lancet explains that now, as a direct result of the bailout agreements, Greece spends less on health than “any of the other pre-2004 European Union members.” It gives one example of this, the dramatic increase in HIV infections among “injecting drug users”, from 15 cases in 2009 to 484 cases in 2012. This was due to a cut in the “street work programmes” which, among other things, provided fresh syringes so as to avoid contagion between drug users.

Another example it gives – which confirms what I wrote in my previous article – is that of the re-emergence of malaria: “drastic reductions to municipality budgets have led to a scaling back of several activities (e.g., mosquito-spraying programmes), which, in combination with other factors, has allowed the re-emergence of locally transmitted malaria for the first time in 40 years.”

The article describes the dire situation in the hospitals, something which is also starting to appear across Europe in many other countries as a result of the 26% cut in the public hospital budget between 2009 and 2011. It describes increases in workloads for hospital staff and growing waiting lists. It outlines the shortages in medicines as a result of more than halving of the budget on pharmaceutical expenditure. Also, because of the introduction of payment for many medicines, one study it quotes carried out in the province of Achaia, shows that 70% of the people did not have enough money to buy the drugs prescribed by their doctors.

Cases of severe depression increased from 3.3% in 2008 to 8.2% in 2011, with “economic hardship being a major risk factor.” In the same period there was a 36% increase in the number of attempted suicides, while actual suicides increased by 45% in the period 2007-11. The article quotes an EU Commission report from 2013 which shows that the number of children at risk of falling into poverty had grown and a 2013 UNICEF report which showed that “a growing number” of children were not getting enough nutrition. Infant mortality has also been going up in the same period.

The Lancet also refers to this phenomenon of denialism, in particular the then Greek government’s attempts to deny that there was any correlation between austerity and worsening health of the population. It adds that the Spanish government has been making the same denials. No doubt we will see an epidemic of this “denialism” across Europe in the coming period. Governments’ do not like to be depicted as callous, de facto, murderers as this logically enrages further working people already suffering the consequences of austerity.

Here we have a medical journal describing the economic situation as part of its studies:

“Concerns that it [Greece] might have to default on its debt led to a series of bailout packages from the European Commission, European Central Bank and International Monetary Fund (the troika). However, these came at a price as Greece was forced to implement severe austerity starting in 2010. The government was required to cut spending by €28 billion in 2010–2011, with a further €13 billion in 2012–2014. Overall, this was equivalent to almost 32% of Greece's 2012 Gross Domestic Product (GDP). The first three austerity packages, in 2010, included cuts to public sector jobs and salaries and to pensions, increases in indirect taxes and privatisation of state-owned industries. As a result, the Greek economy shrank by almost a quarter between 2008 and 2012 and unemployment nearly doubled, from 12.7% in 2010 to 24.3% in 2012. By February 2012, 20 000 additional Greeks had been rendered homeless and 20% of shops in the historic centre of Athens were empty. It was estimated that almost 1 in 10 of the population of greater Athens was visiting a soup kitchen daily.”

The article goes on to outline the dramatic impact on the suicide rate, pointing out that, “There was a clear change in suicide trends after 2010 for both men and women of working age and older women.” And it points out that, “The most affected age group was working men aged 20–59…” adding that, “There has been a clear increase in suicides among those of working age and older that coincides with the imposition of austerity, taking rates to levels not seen for a decade.”

For a medical journal it does something which goes beyond simple analysis of the correlation between deteriorating health and the implementation of austerity measures, and looks at who is responsible. It explains that, “in some cases, including Greece, it is not the elected government that has decided the response but rather external actors that have imposed it.” This is a clear reference to such international bodies as the IMF, the World Bank, the EU and the ECB.

In “respectable bourgeois society” the people at the top do not like such conclusions being widely broadcast, for this underlines how criminal the policies of austerity are. They are literally killing people… of all ages! Men of working age are the most affected, which is a clear indication that in some working class families in countries like Greece, the main breadwinner, having lost employment, finds the situation intolerable and either falls into deep depression and some commit suicide. Women are also being increasingly affected by this situation, as the figures confirm. But the rise in infant mortality rate also indicates that they are killing children as well.

The situation described in Greece, however is not unique. The BMJ Open article explains that, “Our findings are consistent with what has been observed during the current crisis in almost all European countries, many of which actually saw a reversal of a long-term decline in suicides, and in the USA where a long-term upward trend accelerated.”

The article also refers to Russia after having repeated the point that, “This finding [about men of working age being affected] recalls how a 39% increase was observed between 1989 and 1994 in Russian men during the implementation of the ‘shock therapy’ programmes, which similarly resulted in considerable increases in unemployment and economic suffering. In addition, recent epidemiological data from another South European country, Spain, described an 8% increase in the suicide rate associated with economic crisis, at a time when unemployment rose from 8% to 24%.”

The dramatic social and economic situation in Greece explains the extreme political volatility that Greece has experienced in the recent period and it provides insight into what we can expect to see in the rest of Europe in the coming period. It is due to these atrocious conditions that the PASOK, after having been one of the two main parties that dominated the political system in Greece for decades, finally collapsed. In these same conditions SYRIZA rose from being a party of 4% to one of 36% and then formed the government. The same conditions also explain why now it is in serious decline. The people need answers to their pressing problems and Tsipras has failed them.