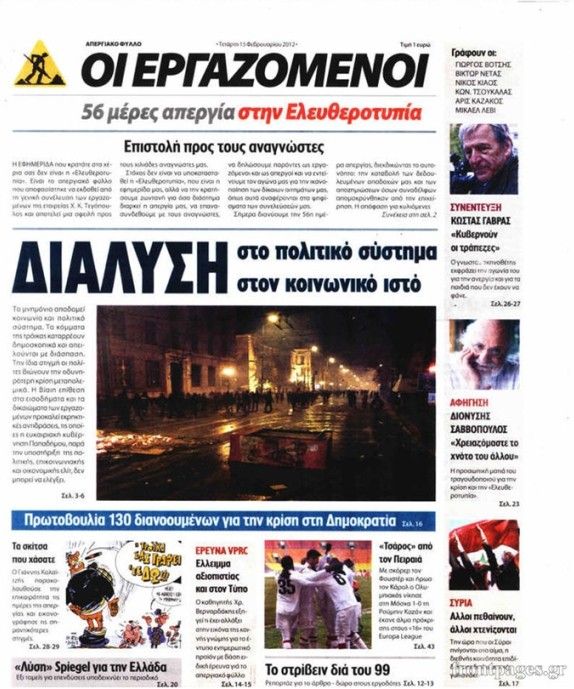 Here is the remarkable story of Eleftherotypia, a Greek left-wing newspaper whose workforce has defied the odds and responded to the threat of bankruptcy with workers’ control as the answer. This is taking place in the second largest newspaper in Greece and is happening despite the sabotage of the owners!

Not only are the workers at Eleftherotypia saving the paper from being wound up, they are turning it into a greater success than it was under the management of the owners. This report is interspersed with an interview with Moisis Litsis, a prominent member of the democratically elected Editorial Committee of “Workers at Eleftherotypia” and Athens Journalists Union Executive member.

The process began in August 2011 when the owners of the paper stopped paying the wages of the workers; they have still not been paid to this day. This led to the workers at Eleftherotypia going on strike on the 22nd December and this is now a continuous strike as we approach the spring of 2012.

On Wednesday the 15th February 2012 the first issue of the new Eleftherotypia was published under de facto occupation and workers’ control. The new paper was entitled “Workers at Eleftherotypia”. This was a bold move and demonstrated not only the class consciousness of the journalists and staff at the paper, but also the rapid acceleration of class consciousness taking place across the whole of Greek society.

The first publication of “Workers at Eleftherotypia” was eagerly awaited, not only by the regular readership, but by a much wider section of the Greek people. The paper sold 31,000 copies of its 1st edition and 33,000 of its 2nd edition. “The people wanted a paper like this, the reaction was very good!” said Litsis.

With the situation in Greek society at such a critical level, the need for reliable journalism and information is apparent to the Greek people. The class bias of the right-wing press and their separate political interests are clear for all to see. In opposition to this “Workers at Eleftherotypia” are a trusted voice; this is not by accident. The paper was formed in the midst of the radicalisation that took place in Greek society after the fall of the Greek military junta in 1974 and was a paper originally owned by its journalists. In this sense the paper has come full circle and its roots in workers’ democracy cannot be denied.

Eleftherotypia has a radical tradition in Greece and has been characterised by its clear internationalist stance. It has long been known for publishing opinions from across the left-wing political spectrum and has often been chosen for exclusive publication rights by radical and ultra-left groups; for instance in April 1977 with the radical urban guerrilla organisation N17, who gave their communiqués exclusively via Eleftherotypia.

After the early period of workers’ ownership and control at Eleftherotypia, the paper was bought by the Tegopoulos brothers in 1978. Sole rights then passed to Thanasis Tegopoulos, and the paper is currently owned officially by the firm H.K Tegopoulos.

However, now in a period of global capitalist crisis which is finding its clearest expression in Greece, the role of private investors and the principle of private ownership is coming under full scrutiny: In this context “Workers at Eleftherotypia” is showing the way forward and challenging the hegemony of the bosses with the might of workers’ democracy.

The Editorial Committee that has now been established at the paper is democratically elected by the general meeting of the strikers. There are 800 men and women workers who are now running Eleftherotypia, ranging from journalists to technical staff, cleaners to caretakers. The new paper is being distributed across the whole country at a price of 1 Euro. This money goes straight to the strike fund for the workers and also helps them to publish new editions of the paper.

All of this goes to show what can be achieved under workers’ democracy allied to a strategy and a plan.

The workers at Eleftherotypia are owed a total of 7 million Euros in unpaid wages over a period of 7 months. The continuous strike has received great support from the public and has been subsidised by an excellent solidarity movement by various collectives and even individuals.

“Many readers showed support from the beginning of the strike” said Litsis on the support he and the workers had received.

This once again demonstrates the growing class consciousness in Greece, where workers recognise one common struggle and know that if they do not help one another, they will in turn weaken their own resistance in their respective workplaces.

This solidarity has also been reflected in the growth in sales figures for the new paper. “People who never bought Eleftherotypia were now buying it.”

The new funding structure at Eleftherotypia has clear political implications as they no longer have to bargain with the management for what articles can be written and published. Instead the debate about politics and theory is taking place solely amongst the workers themselves.

“What is important in this experiment is that we are showing that we workers, despite our differences and despite the different political views, are able to publish a full newspaper that is even better, instead of having well-paid managers to tell us what is good and what is bad.”

Litsis talked about political disputes and how the general meeting of strikers and editorial board resolved such problems. “Some people asked what we were doing on the Editorial board… we were either too far to the left or too far to the right. In the end the majority decided.”

In the Interview Moisis said that there was a small problem as many of the articles in the new paper are now published anonymously for fear of reprisals; this means that people cannot contact journalists directly about the views and politics expressed in the articles.

The time may come though, when the journalists feel confident enough to add their names to their articles; this would certainly represent a step forward for “Workers at Eleftherotypia” and the movement as a whole.

The management at H.K Tegopoulos are of course doing all in their power to halt the progress of the paper run under democratic workers’ control. When they learnt of the activities of the workers and their publishing enterprise, they first cut off the heating, then the systems used by the sub-editors and finally all other sections of the workshop.

“Workers at Eleftherotypia” is printed at printing works that do not belong to the company and with the support of the press workers’ union.

The case of Eleftherotypia, however unique in international journalism, is not unfamiliar at all when it comes to other Greek companies and enterprises. Many private sector enterprises have stopped paying their workers: workers are being abandoned by their shareholders who wait for the economic climate to recover.

Because of the crisis of capitalism that is currently ravaging Greece, credit has all but dried up for hundreds of companies. Capitalists are choosing to file for bankruptcy under section 99 of the bankruptcy code rather than fund continued production from their own personal wealth. Many shareholders are simply pre-empting a Greek default and exit from the euro zone and are claiming collateral damage. This shows the true nature of the capitalist class and their ‘loyalty’ to the rest of Greek society. The German or French ruling class would be no different. Therefore what Greek workers are learning about the capitalist class today, German and French workers will be learning tomorrow.

At least 100 companies listed on the stock-exchange have followed the example of T.K Tegopoulos and filed section 99.

At present management at H.K Tegopoulos have threatened legal action and are using intimidation tactics by threatening to sack the Editorial Committee. This means that while the workers have taken on the task of producing their own paper under a de facto occupation, they are also involved in a legal dispute; the workers are now filing their own legal counter-claims.

Comrades from the IMT salute the struggle of the workers at Eleftherotypia and all those who have supported them throughout this dispute.

With the situation in Greece getting worse under the dictatorship of the Troika and the subservience of the current Greek political administration, the case of workers’ democracy appears as a beacon to those looking to solve the problems of Greek society.

The latest news coming from Greece is that the Greek Athletics federation is suspending all domestic sporting activities as there is not enough money to pay the coaches and the staff. This could quite possibly mean that unless the policy of cuts is reversed, Greece will have no Olympic team in this summer’s Olympics eight years after hosting the games!

These embryonic elements of workers’ democracy need to be deepened and extended. And further to this the workers need the left parties to actually represent their views and also develop a new political perspective. They must also base themselves on workers’ democracy and accountability as evidenced in the case of Eleftherotypia; a bold and radical socialist programme is required. This is the true solution to the capitalist crisis in Greece and in Europe. The rule of the bosses needs to be replaced by a political system based on the rule of the workers, combined with a revolutionary movement of the workers of Europe.