International Marxist Tendency
Share
Tweet
The Venezuelan speaking tour of Alan Woods has now moved to the West of the country, kicking off at PDVSA in Zulia. Around 200 workers and revolutionary activists from Cabimas, Maracaibo and Ciudad Ojeda turned up and gave Alan a very warm and enthusiastic welcome. And again, all books, pamphlets and books were sold out.

After the success of Alan Woods' tour in Eastern Venezuela, on Friday, June 27, the British Marxist presented his book "Reformism or Revolution, Marxism and socialism of the 21st Century" in the state of Zulia. 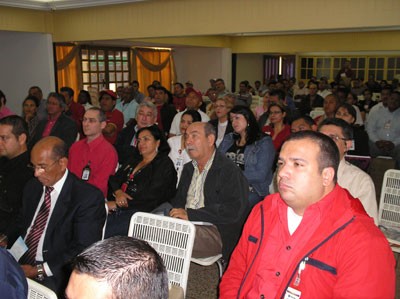 Zulia is still the most populated state in the country and the birthplace of its oil industry, of which 50% is still located here. On a bright and hot morning, the "land that the sun loves" (as a popular song goes) seems intent on honouring its reputation. The impressive Lake Maracaibo (in reality more of a sea than a lake) turns the horizon blue and fills the whole of the landscape with its immensity. The feeling of any passenger crossing the eight and a half kilometre bridge over the Lake is one of flying above the water.

The bridge connects Maracaibo, the most populated city in Venezuela and capital of Zulia, with the oil centres on the Lake's Eastern Shore: Cabimas, Ciudad Ojeda, La Grita... all of them associated with the first movement of organised labour in Venezuela, including the oil workers' general strike of 1936 - a bitter struggle that was met with harsh repression on the pat of the oil multinationals and the oligarchy - which gave birth to and spread the trade union movement across the oil industry and throughout the country. As one crosses over to the Eastern Shore, the view becomes one of oil fields, towers, wells and the naked flame burners.

Alan Woods' meeting was held in the La Salina Lake Club. "This used to be the private reserve of the managerial layers of PDVSA. After the oil sabotage it was opened to the people and to the working class and today it is used as a centre for political education, organising debates, forums, etc", explains Freddy Lean, PDVSA West Health Manager and one of the organisers of the meeting, who receives us at the entrance of the Club. The meeting room had 200 seats and it was already filled almost to capacity. The enthusiastic audience was composed of workers and revolutionary activists from Cabimas, Maracaibo and Ciudad Ojeda, and it welcomed Alan Woods with a warm applause. His writings and books were already well known in the area (particularly his articles dealing with the defeat in the constitutional reform referendum which had a big impact). 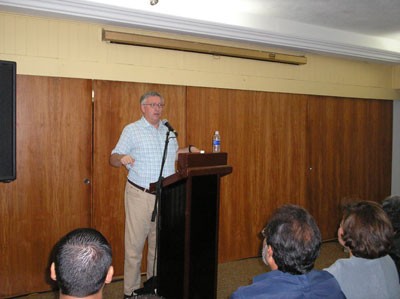 The meeting had generated a lot of interest and even before it started more than 10 copies of the book and several copies of El Militante had been sold. In the audience there were oil workers from the PDVSA La Salina Central Workshops, Barrio Adentro doctors, workers and directors of the Coromoto Socialist Hospital in Maracaibo. There were also workers from other companies and several members of Communal Councils, some student youth from the Bolivarian University, lecturers and students from the Zulia University (LUZ), a large group from the Bolivarian Workers' University and even a representative from the community of Colombians who have come to Venezuela fleeing the barbarism and misery that the oligarchy in the neighbouring country has created.

The event was opened by Freddy Leal, Health Manager of PDVSA West and Freddy Parra, director of the Coromoto Socialist Hospital in Maracaibo (this is a very interesting experience in which a top level hospital, which was sold off by the old IV Republic PDVSA to a private consortium, has been taken over, renationalised and opened to the people).

After both comrades had spoken, Alan started his speech by describing the dramatic and inhuman living conditions that capitalism condemns the masses to around the world. Then he explained what socialism is and how this has nothing to do with the bureaucratic and totalitarian regime that fell in the USSR or the caricature the reformists are promoting. The audience responded in the same enthusiastic manner as in previous meetings.

"After the fall of the Berlin Wall, the ruling class launched an unprecedented campaign against the ideas of socialism. Many former Stalinists, former leftists, former guerrillas, joined this chorus: socialism is dead, Marxism is dead, socialism and revolution are impossible, etc. In this context there was a man, a mass leader, who had the courage to stand up and say that socialism is the only alternative, for Venezuela and for humanity. This man was Hugo Chavez", he said. The audience responded with a standing ovation. 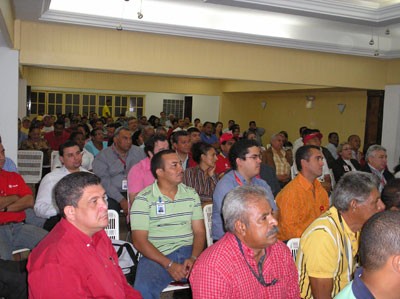 Then Alan explained how the "advisors", reformists and bureaucrats of all kinds are trying to turn the idea of socialism around. They started talking about a mixed economy, of how socialism does not mean touching the private property of the capitalists, and so on. "And there is not only one Heinz Dieterich, there are many", he warned.

Alan made some harsh criticisms of those who, using an alleged low level of consciousness of the masses, provide an excuse not to move towards the expropriation of the capitalists and the building of socialism. "The Venezuelan revolution has been going on for 10 years. I have studied several revolutions, in the 20th, 19th, 18th, 17th centuries, and I can assure you that none has lasted such a long time, because it is impossible to maintain the masses in ferment for such a long time, in struggle, without falling into apathy and demoralisation. However, the workers of Venezuela are still struggling to complete the revolution. I am telling you that those who talk about a low level of consciousness are lying. What this reflects is a very high level of revolutionary consciousness."

Alan reminded the audience of the coup in April 2002, how the masses defeated it and explained how at that time the appeal to dialogue with businessmen did not lead them to invest but instead was used by them to prepare the next coup, the bosses' lock out of December 2002. "Do you think that they said to themselves ‘what an open government, let's dialogue?' No! They interpreted it as a sign of weakness and went for the jugular. This is what they will do now as well. The ruling class will never reconcile itself with the revolution".

"Who organised the coup?"
"The bourgeoisie!" shouted many, "The oligarchy!"
"And who make up the oligarchy?"
"The capitalists, the bosses! Cisneros and Mendoza!" came shouts from different parts of the room.
"And, do you think that if we now offer an open hand to these sections, if we dialogue with them, they will change, they will invest?"
"No, never!" was the response.

During the debate, many of those who spoke expressed their uneasiness at the meeting of Chávez with the businessmen on June 11, and how this has strengthened a section of the reformist leaders. There were many questions. "How can the revolution be completed? Will imperialism intervene? How can we wing the elections on November 23?"

In his reply, Alan stressed the need to defeat the opposition in the November elections, and to campaign for a vote for the PSUV, but at the same time he warned of the dangerous situation the Revolution is facing:

"The constitutional referendum on December 2 was a red light. The reformists are trying to tell us that all is well. But someone that tells you that all is well when that is not true, would not be a good friend, or one that you could appreciate. We must be critical, always from the standpoint of the defence of the revolution, but critical. The reform referendum was not won by the counter-revolution, we lost it. And we lost it because three million chavistas did not go to vote. Why didn't they? You know better than me. Because they are tired, tired of speeches and seeing that problems are not solved, tired of hearing talk about socialism and seeing that the evils of capitalism continue."

Reformists have only one refrain: "It cannot be done, we cannot expropriate, we cannot build socialism, we cannot establish workers' control. I come here with a simple message: yes, we can!" At this point the whole audience stood up and enthusiastically echoed these words, "Yes we can, yes we can!" 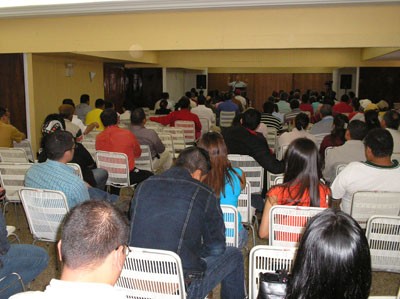 Alan reminded the audience of Bolivar. "If someone had told Bolivar that it could not be done and he had listened to this ‘advice', you would still be under the Spanish yoke today. When I hear talk about Bolivar's ‘dream' I get angry. It was not a dream; a dream is something unreal. The unity of Latin America, socialism, these are not dreams; they are a brilliant idea and a pressing necessity. But they can only be carried out by expropriating the capitalists and building socialism."

"Only if the revolution completes its jobs, if it solves these problems will we win, otherwise the situation can get very difficult and the revolution could be defeated. But this demands expropriation of the capitalists. We do not want to touch the private property of the workers, peasants or the middle class. What must be expropriated is the property of the capitalists, the banks, the land and the big industries. Only in this way can we democratically plan the economy and solve the needs of the population."

At the end of the meeting Alan Woods made an appeal to struggle against any attempt to divide and split the PSUV. "Outside of the Bolivarian movement there is nothing, we must struggle within the PSUV to make it a genuine socialist and revolutionary party of the workers, and to defeat the attempt of the bureaucracy to turn it into a reformist party."

The meeting ended in a mood of general enthusiasm. Many made a point of thanking the speaker, getting him to sign a copy of the book and to express their total support for the ideas that had been explained. These included oil workers' leaders, veterans of the left wing movement and the Colombian comrades. This enthusiasm could be seen in the fact that all the material at the literature stall (including all available copies of the "Reformism or Revolution" book, with many leaving their details to get a copy as soon as more become available) and all copies of El Militante were sold out. Forty of those present left their contact details to join in the building of the Revolutionary Marxist Current (CMR).