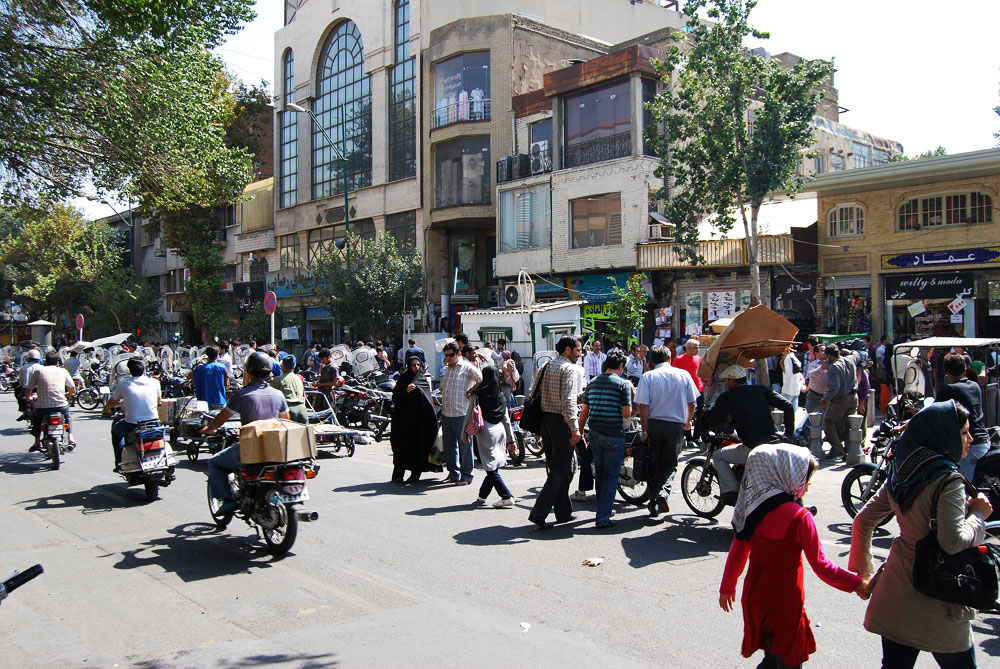 For the past year Iran has experienced a deepening crisis of capitalism, which in the last few months has spiralled into hyperinflation and devaluation of the currency. A recent trip to the country provided a perspective of the current situation within, particularly how people are dealing with the worsening conditions.

For most of the trip I was in contact with people from northern Tehran, predominantly a middle class area and one of the most affluent in the country. But even here some of the adverse effects of the crisis were apparent. The Iranian Rial has lost 80% of its value since the end of 2011, falling to as much as 35,000 to the dollar. The most profound impact of this among the middle class is the severe devaluation of savings and purchasing power; many I spoke to revealed the loss of their expendable income, and inability to buy luxury goods they previously could afford. Visits to the shopping districts such as Tajrish as well as the Tehran Bazaar found all to be much quieter than normal, indicating how far consumption has decreased.

Almost all I spoke to blamed the government for the current plight of the country. One university professor, for example, pointed out that up until recently, the government claimed Western-imposed sanctions had no effect on the Iranian economy, making it difficult to accept its recent line that sanctions are the cause of the current currency crisis. From a Marxist perspective, it cannot be denied that sanctions have worsened the situation in Iran, especially the standard of living, but it should not hide the fact that they have, more than anything, exacerbated a crisis generated by the nature of the Iranian capitalist economy. Relying on the export of oil and natural gas, the Iranian government is weak in the anarchic world market to which all countries are enslaved. Most people I spoke to at least recognised that there was a fundamental problem with the handling of the economy, independent of the impact of sanctions.

However, it was equally clear that people from this layer of society did not believe it necessary to take action to change the situation. I was told that people were able to get by and live relatively comfortably. Furthermore, there was a general feeling of demoralisation amongst people who previously participated in the Green Movement of 2009; one such individual, a vet from Tehran, argued that there was no point protesting anymore because previous efforts for change were to no avail, being met with bloodshed and oppression. All were aware of the deep divide within the government, and the prospect of a regime crumbling from within only confirmed their inclination that direct action was unnecessary. Nevertheless, the relative level of comfort these people enjoy can only last so long.

The poorer layers of society do not even have this safety net, and have been driven to the limit of subsistence by the current crisis. When even basic goods are unaffordable the potential effects are either paralysis or anger. The latter was most apparent in the protests at Neyshabur on 23 July earlier this year, when people took the streets over the rising cost of chicken.

However I noticed the opposite effect when speaking to one dockworker in the industrial town of Abadan in the south-west province of Khuzestan. He spoke of how much the town had changed under the current regime, falling into deprivation from a position of relative affluence. When I asked him why, he blamed the government’s poor handling of the economy, especially its failure to provide welfare assistance when people most needed it. Indeed, he revealed how he was having to stop buying meat altogether. However, when I asked him what should be done to change it, he said he simply did not know. In such times, such raw anger can only ultimately be channelled into paralysis when a lack of a clear political alternative is presented.

At the same time, the crisis has not necessarily stretched across the whole country. During a stay in a village in Esfahan province, local residents told me that life had remained largely unchanged. Their expectations were not the same as those living in the cities, and much of what they consumed was produced locally. Moreover, they were largely unaware of the political situation of the country. The one resident that did speak to me about politics – a caretaker – was inclined to supporting Ahmadinejad merely because of a series of recent populist policies aimed at the poorest strata of society, such as cash handouts to mitigate the blow dealt by the cut in state subsidies.

I was not made fully aware of the wider feeling in working class industrial areas from my own experience, but what was clear was how much they were being monitored by the regime. In Abadan, which is home to the largest oil refinery in Iran, as well as around the Haft Tapeh sugar cane plantation, there was high security; I saw armed guards surrounding the perimeter of the refinery, and on the roads around Haft Tapeh there were several check points which we were only allowed to pass because of a nearby historical site. Whether this is typical remains unknown, but either way it demonstrates the sensitivity with which the government has about these workplaces. It was the Abadan oil strike during the 1978-9 revolution that dealt the most severe blow to the Shah’s regime, and a similar strike today would have a similar outcome. While the government does pay the Abadan oil workers – as well the workers in its apparatus of oppression, such as the Revolutionary Guards – a higher than average wage, the current worsening of living conditions must mean the regime’s sensitivity has been greatly heightened.

And from recent events in the country, it is clear that there is a growing opposition to the government’s handling of the economy among the working class. Over the last 4 months, a campaign of petitions directed at the regime has taken place across 13 different provinces, carrying 23,000 signatures, demanding the raising of the minimum wage by the same level as inflation, payment of unpaid wages, and the introduction of benefits in certain industries, in a clear statement that workers see their struggles as one. Whether the workers at Abadan share these feelings remains unknown.

Because of such events, it is likely that any mass movement that might arise in the country will have a different character to the Green Movement. The new working class layers brought into opposition by inflation will have an important role to play in any struggle. This is especially so given the demoralisation of the middle class layers. And although many in the middle class have no desire for protest at the moment, they could yet be driven into it if the crisis deepens.