While the Italian government has closed non-essential factories, production continues unabated in Germany, irrespective of the dangers to workers’ health.

Car factories form an important exception, but this has little to do with the coronavirus’ spread. As we have analysed repeatedly, the world economy is heading straight for a global recession after the longest “recovery” in history. The car industry in particular has been severely weakened since 2018. 2017’s global output of 73.4 million cars had been reduced to 67 million in 2019. China’s (2017: 24.8 million, 2019: 21.4 million) and Germany’s (2017: 5.6 million, 2019: 4.7 million) car industries have been hit particularly hard, but Japan and the USA also recorded significant reductions. In these countries, car manufacture is the most important branch of industry. For this reason, a drop in production is a significant drag on their entire economy.

This is why VW pulled the emergency brake, ceasing all production for two weeks from 13 March. Their stated intent was to protect their employees against the coronavirus, as well as to take precautions against the looming fall in demand.

The bourgeois press is talking about the “corona-crisis” as though the virus’ spread were responsible for the global recession, just like they did with the “oil-crisis” of 1973. However, the fact of the matter is that it had long been obvious a new crisis was on the horizon. Almost a month ago, we wrote the following in an article discussing the pandemic’s consequences:

“The German economy has now entered into technical recession as this quarter is going to follow the previous quarter with negative growth rates. Its industrial production fell 7% last year, and a recovery from that fall seems unlikely this year. Germany’s two most important trading partners are China and Italy, particularly the north of the country. The German economy is very dependent on world trade and thus vulnerable to any disruption. Now its industries will face at least two months of disruption to the supply of parts and raw materials. Difficulties in the German economy spell problems for the whole of the EU. Germany is the key economy in Europe and the consequences will be far reaching. [...] The world economy was already on the brink of another downturn. The virus might push it over the edge. In that sense, the virus might become the accident ‘behind which necessity hides itself’, as Engels put it.”

The production lines, then, will lie still for at least another week in Emden’s VW plant, the largest company in the region of Ostfriesland.

The situation is very different at Meyer Werft, a shipyard in Papenburg. It was only last week that the cruiser “Iona” left the shipyard for Bremerhaven, where its interior will be finalised. In normal times, several hundred craftspeople would now be hard at work to ensure the cruiser can be delivered on time. The government’s rules, however, prevent this.

In Papenburg, production is continuing. Shipping line “Saga Cruises” expects the “Spirit of Adventure” to be delivered this summer. Sticking to the agreed-upon timetable is of existential importance in the shipping business. A one-month delay in the manufacture of the cruiser “AIDAnova” caused the shipyard to incur a hefty fine, as well as messing up its schedule. The company’s employees had to work many hours of overtime in 2019 in order to make up for lost time.

Last week, the shipyard recorded its first case of the coronavirus, leading it to close the visitors’ centre as well as two canteens. However, management is now exploiting their employees’ anxiety instead of closing the shipyard completely. In the local newspaper Ostfriesen Zeitung of 19 March, the company’s spokesperson “explained” that “this will be a situation so dramatic, we should count ourselves lucky if we can make it through economically sound instead of going under. That’s what this is about, and there is no leeway”. Plainly, this means: “employees’ health is of secondary importance; what really matters is that we deliver the next cruiser on time and get to make our profits”. 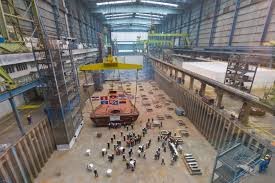 With the aim of balancing the need to keep to the schedule, even in this crisis, with that of at least giving off the appearance of caring about their employees’ health, the company took the following measures: the shipyard is be divided into seven zones, and all workers have to come in for six hours per day, including Sunday. Additionally, all recreation rooms are closed.

This would mean shortening the working day by an hour, which the bosses want to deduct from employees’ working time accounts. The factory committee rejects this, suggesting instead the hour be split between employees and employers. They also reject the obligation to work on Sundays. Nico Bloem, the factory committee’s head: “What matters is ensuring people remain healthy. Other large industrial plants have shut down production, whereas we have more than ten thousand people in the shipyard every day. And instead of staying at home in rotation, we are now expected to work on weekends as well. Something’s not quite right.” (Ostfriesen Zeitung, 19-03-2020)

There are many outsourced workers from Eastern Europe among these ten thousand. Meyer is worried these workers might travel back to their home countries to avoid endangering their health in Germany. For this reason, the company is taking a hard line, sending a letter to these employees, the gist of which reportedly is as follows: the company would just like to draw their employees’ attention to the fact that neither being ordered back to one’s home country, nor being affected by possible travel bans represents instances of force majeure; that is, an employee not coming to work for these reasons represents a breach of contract, and the subcontractors are obliged to make replacement available.

It became clear just moments after the bosses introduced these measures that they weren’t working: long queues quickly formed outside the shipyard’s entrances, leaving workers unable to maintain the safety distance of 2 metres. In a long open letter published in the local press, employees’ families complained that they were expected to toil in close quarters despite the pre-existing health conditions of many, all while managerial staff were allowed to work from home. They add: “we families are worried. All of us live with our children or our parents, so if our family-members contracted the virus, it would cause a chain reaction.” (Ostfriesen Zeitung, 21-03)

Meyer Werft’s half-hearted safety measures will fail to prevent the spread of the pandemic; they are only designed to transport a false sense of security to the workforce. The only way to effectively protect working people is to temporarily shut down the shipyard, along with all other non-essential companies in Germany. We can conclude this very clearly from Italy’s experience.

This exact demand has since been made in an appeal released by a group of trade union activists:

“We do not want to contract the virus at work, in the bus, or on the subway, as has already happened to too many! Car workers are able to stay at home, as no one is buying cars anyways, but what about everyone else? All those whose work is non-essential must be allowed to stay at home! The bosses get billions in subsidies, what do the employees get? The only way China was able to halt the pandemic was by shutting down everything in Wuhan, including its economy! At this point, we don’t care about the companies’ share prices and profits; stopping the pandemic and safeguarding our health is more important. Why don’t the shareholders come work in the factories? The unions must demand welfare payments for all those in non-essential industries. Those who have to keep working: only with the FFP3 protective mask. All those recovered and immune from the virus should help with healthcare! Stay at home!”