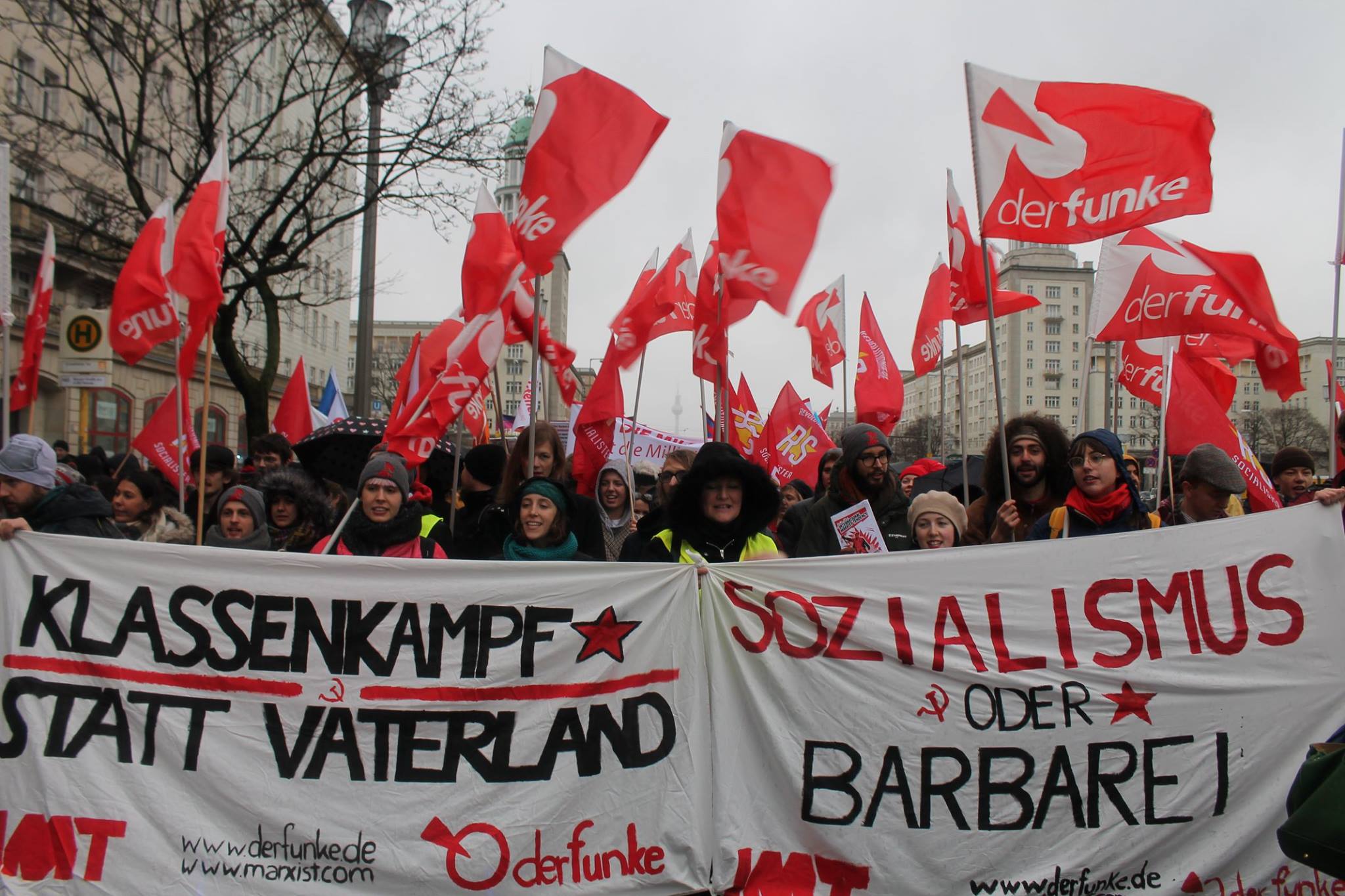 On 13-14 January, tens of thousands of people from across Europe gathered in Berlin to commemorate the 100th anniversary of the murder of Rosa Luxemburg and Karl Liebknecht. Despite the poor weather, this year’s demonstration was one of the largest and most militant events that Berlin has seen in the recent period; a clear sign of the political polarisation and class consciousness that is developing as a result of the intensifying capitalist crisis.

The LL (Luxemburg-Liebknecht) Demonstration is held every year in Berlin to mark the brutal assassination of the great Marxist revolutionaries and founders of the Spartacist League and German Communist Party (KPD), Rosa Luxemburg and Karl Liebknecht. The murders were carried out by the reactionary paramilitary ‘Freikorps’ at the behest of the leaders of the Social Democratic Party (SPD).

With the November Revolution having taken place throughout Germany only two months earlier and the old imperial regime having been overthrown, January 1919 saw the German bourgeoisie reach new lows in their desperate attempts to crush the revolutionary movement and the working class. The murder of Luxemburg, Liebknecht and other German communists in a series of attacks by the ultra-reactionary Freikorps with the willing assistance of the ruling SPD represented a significant blow to the efforts of the workers’ movement in Germany to achieve socialism in the wake of the October Revolution of 1917 in Russia.

The LL Demonstration was first organised in the years following Luxemburg and Liebknecht’s murder as a commemoration of their achievements and a reminder that the working class cannot rely on reformist, social-democratic leaders to build socialism for them. The demonstration has taken place in Berlin every year since, except for during the national-socialist period, when it was banned.

As this year marked the centenary of their deaths, a series of events took place over the weekend to commemorate and celebrate their lives and work. On Saturday night a public meeting was organised by Der Funke (German section of the IMT) to launch a recently published book: The Revolutionary Heritage of Rosa Luxemburg by Marie Frederiksen, which defends Rosa Luxemburg’s legacy from all manner of political distortions. 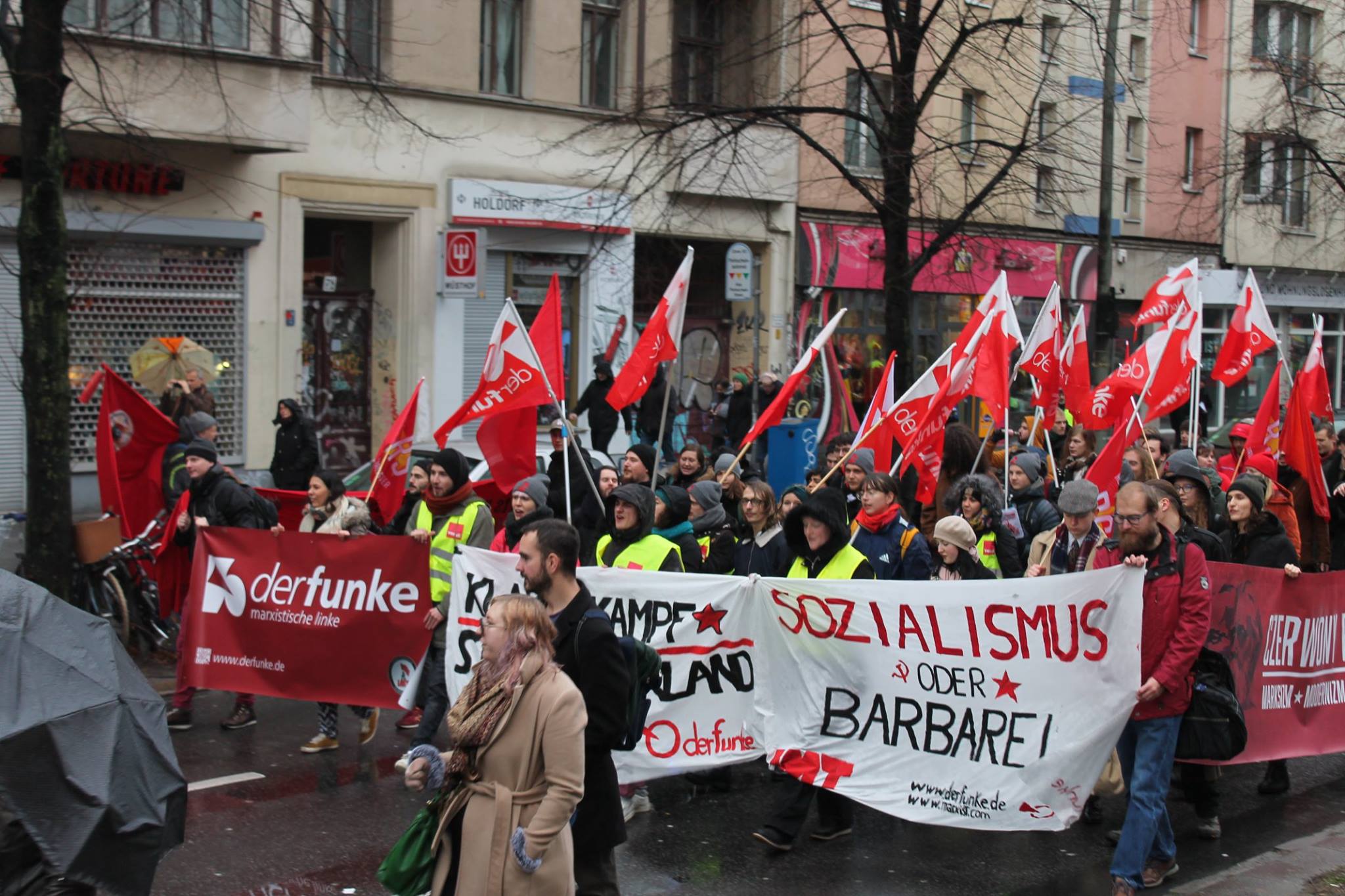 Thousands of people from across Europe gathered in Berlin to commemorate the 100th anniversary of the murder of Rosa Luxemburg and Karl Liebknecht / Image: Der Funke

The event was packed, with over 80 people in attendance, including visitors from the UK, Italy, Austria, Denmark, Sweden, Norway, Poland and the Czech Republic. Overall it was a very successful evening with a militant and optimistic atmosphere. Marie (editor of Revolution, the theoretical journal of the IMT in Denmark) gave an analysis of Rosa Luxemburg’s life and political work, emphasising her commitment to world socialism and denouncing bourgeois claims that she was merely a ‘pacifist’.

The talk made clear that Luxemburg was a dedicated Marxist and a revolutionary, who opposed the First World War as a product of capitalism and imperialism, rather than on a purely moralistic basis. Members of the audience also highlighted the importance of remembering and defending Luxemburg’s legacy against slanderous attacks from the right, whilst noting the importance of revolutionary organisation in a period of deep capitalist crisis. The event concluded with an emphatic financial appeal to support the work of Der Funke across Germany. Over 1000 Euros were raised in donations and sales of books and pamphlets, showing the revolutionary commitment of those in attendance. 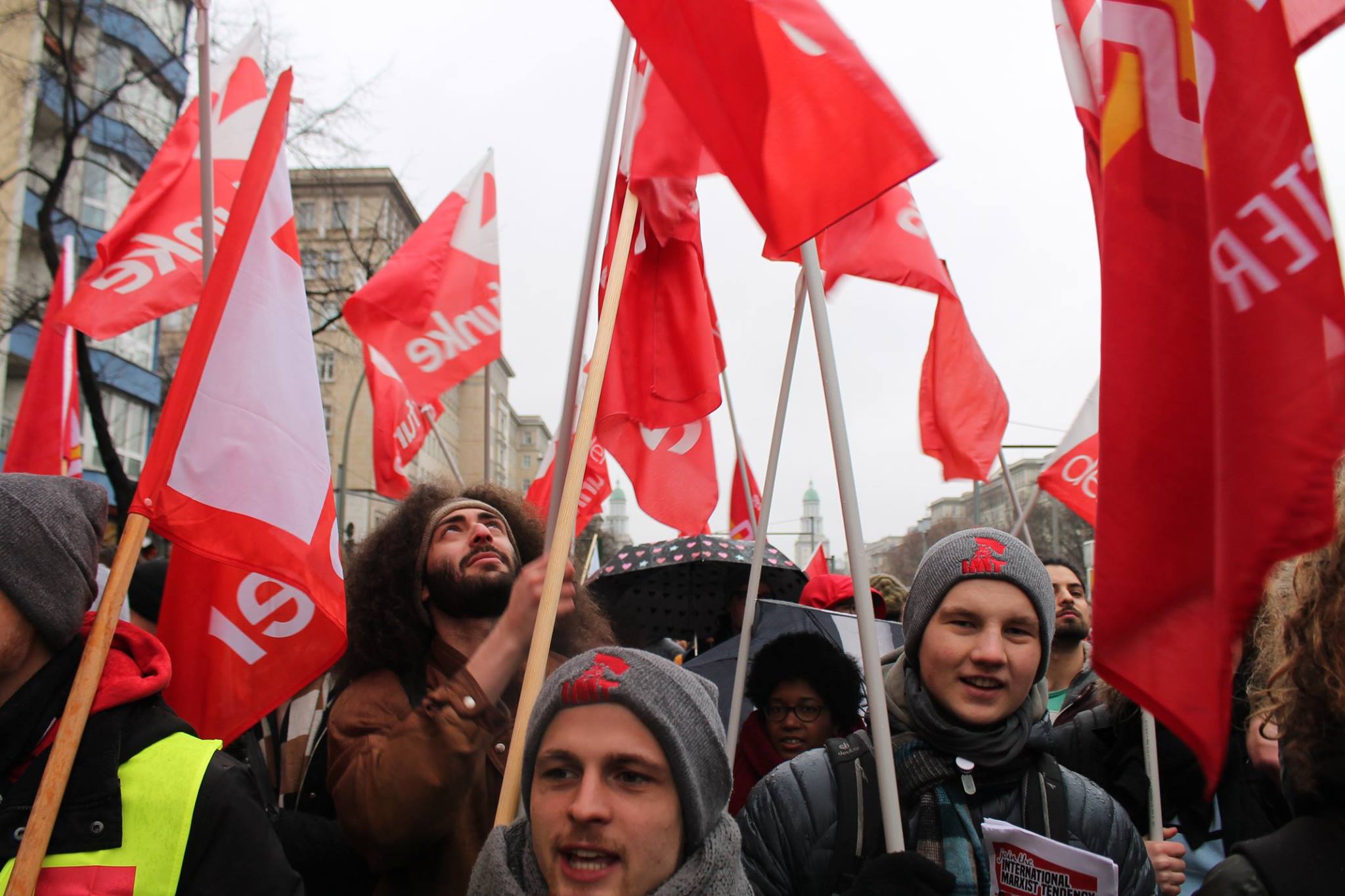 On Sunday, the LL Demonstration itself took place, starting at Berlin’s Frankfurter Tor in the East of the city and proceeding to the Socialist Memorial Cemetery, where many of Germany’s leading revolutionaries are honoured. Despite heavy rain, the demonstration was characterised both by its size and its militancy. The event is traditionally attended by German left-wingers and prominent politicians, including leading members of Die Linke (The Left Party), who lay flowers and wreaths at the memorial. This year was no different, however the 100th anniversary also attracted a large international attendance, making it considerably larger than in previous years.

The IMT organised a significant bloc on the demonstration, with several European sections bringing their flags and banners. It was one of the most explicitly internationalist blocs at the march, making use of a variety of international slogans. Hans-Gert Öfinger, a leading comrade of Der Funke, described the IMT’s mobilisation as “very impressive”, congratulating those in attendance on their dedication despite the terrible rain and cold.

A deeply militant atmosphere was noticeable throughout the day, with chants and slogans emphasising international solidarity and calling for an active struggle against the ruling class. At the end of the march, a rally was held in which speakers noted the fragility of the capitalist system in the era of austerity and growing right-wing reaction. Several speakers encouraged the attendees to sing revolutionary songs, including the Internationale, clearly revealing the passion and enthusiasm of people at the demonstration. 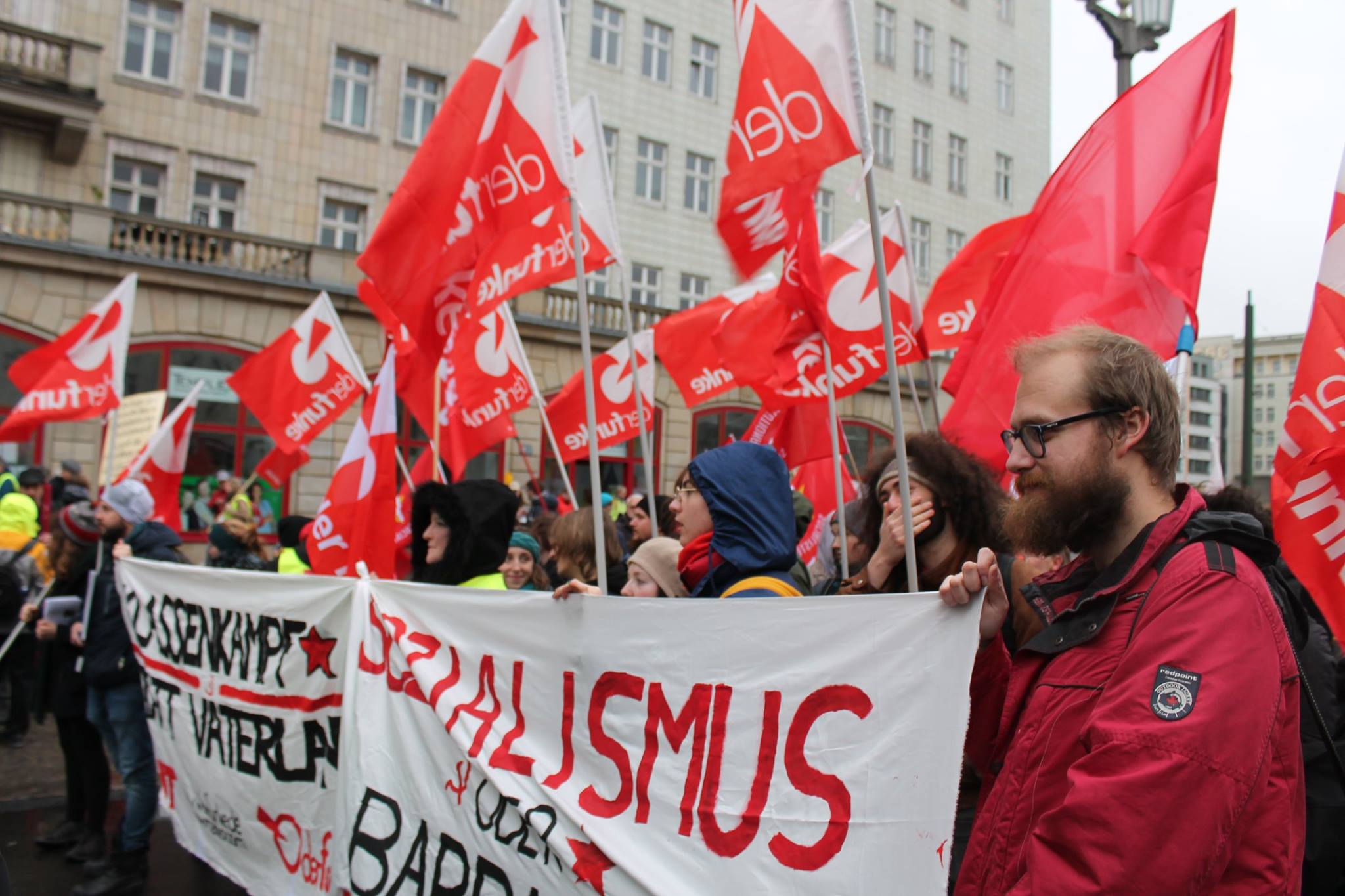 Though the event has shrunk in size since the capitalist reunification in Germany, a new layer of young people was in attendance, radicalised by the sharpening class tensions of the current period. Many of the demonstrators could be seen wearing yellow vests in solidarity with the gilets jaunes protests currently taking place in France and throughout the world. Overall, the demonstration was characterised by its militancy as well as a profound respect for the revolutionary sacrifice of Luxemburg and Liebknecht.

Rosa Luxemburg’s contributions to Marxist theory remain invaluable to socialists today. Similarly, Karl Liebknecht played a crucial role in putting forward a genuine socialist perspective for peace in the face of the betrayals of social-democracy in supporting the imperialist First World War. Ultimately, as was expressed by many people at the commemoration events this weekend, Marxists must not be afraid to defend the legacy of Luxemburg and Liebknecht as true revolutionaries. With class tensions and capitalist crisis clearer than ever before, there has never been a better or more important time for the ideas of Marxism. The LL Demonstration was an important recognition of the history of the working-class movement, but as many demonstrators noted, the crucial task at hand is the building of a revolutionary organisation capable of putting forward the ideas of Marxism and fighting for genuine socialism.