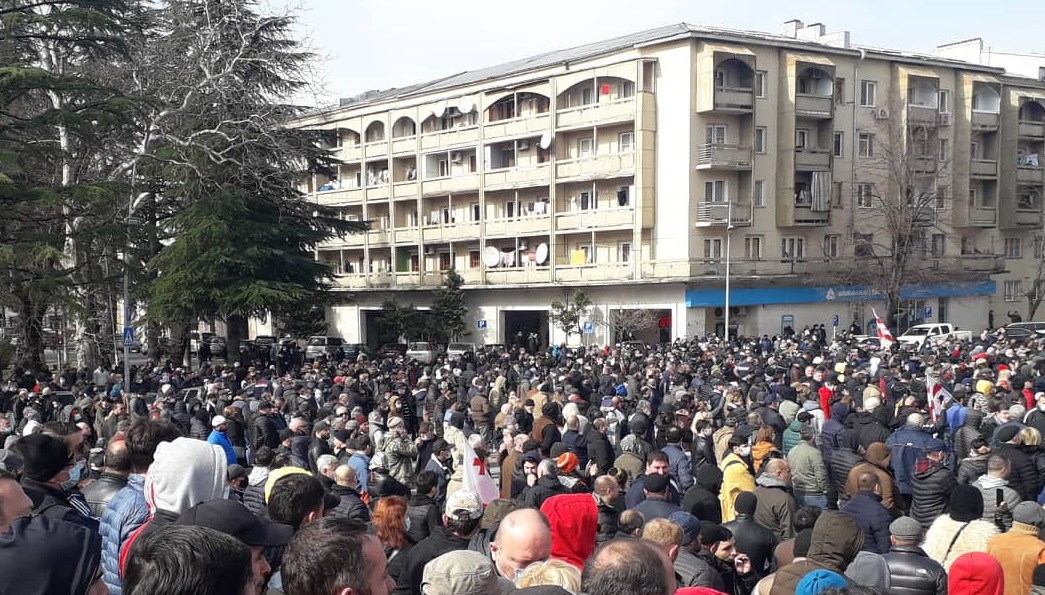 Serious protests are ongoing in Georgia against the building of a dam in Namakhvani, which poses the risk of massive job losses, energy price hikes and environmental destruction. This protest grew from a handful of people in Lechkhumi in the West into a national demonstration, which culminated on 14 March in a 22,000-strong protest in Kutaisi. This was the largest environmental demonstration in recent memory. Daily protests and encampments continue to this day.

At the same time, anti-government protests continue in the capital city of Tbilisi, with opposition parties, led by the right-wing ENM (which governed Georgia for eight years) demanding the release of “political prisoners”, including opposition leader Nika Melia.

Western imperialism and its pundits, alongside opposition-controlled media, have declared the latter the central struggle for the survival of Georgian “democracy”. But in truth, there is a more significant process underway in Georgian society.

A tale of two protests

The Tsibli and Namakhvani movements have very different class content. The protests in the city are headed primarily by reactionary petty-bourgeois elements and bourgeois parties. Meanwhile, the protests against the dam are led by the workers, poor and radical middle-layers, including students and small farmers.

On this day of Internatoinal Rivers, thousands gather in #Kutaisi, #Georgia, to protest the construction of #NamakhvaniHPP and large dams on Georgian rivers and to #SaveRioniRiver! #DayofActionforRivers2021#RiversUniteUs#RightsofRivers pic.twitter.com/XNMKJxuJgf

The movement in Tbilisi reflects a conflict between sections of the bourgeoisie. Meanwhile, the dam protest is a popular, grassroots mobilisation that has garnered the support of the vast majority of the national population.

Aside from its immediate environmental and local demands, the protests reflect a general mood of anger and dissatisfaction with the political elite.

As the crisis of capitalism deepens, class struggle in Georgia is slowly coming to the fore, and bonds of solidarity are spreading. A good example of this is the recent strike of 3,000 miners in Chiatura, who demanded a rise in wages, and who also expressed their solidarity with the dam protests.

The liberal media is attempting to slander the dam protests, and divert all attention to the bourgeois “struggle” in the capital. But people are beginning to see through their deception.

The widespread disgust with all the main parties can be seen in the fact that only half of the population even bothered to vote in the last elections. The majority of Georgians understand that these characters are all part of the same rotten system.

The dam protests have been running continuously for more than 180 days. As part of this hated construction project, 578 acres of land have been officially sold to the Turkish company “ENKA” for 16 lari ($5 USD!)

The spontaneous nature of this struggle, and the inexperience of its participants, has expressed itself in some limitations. For example, the protestors have so-far taken a pacifist route, and have tried to maintain a dialogue with the government.

The ruling party has responded with a campaign of lies and sabotage. The party-aligned media has called the protests a Russian-led project, and even hinted at an opposition conspiracy.

The claims are contradictory, because the opposition media are also opposed to the protests. Nika Gvaramia, arch-propagandist of ENM (the main Russophobic party in Georgia, most closely aligned with US imperialism), has publicly declared that he isn’t against the building of the dam, and that he favours right-wing economics. This isn’t a surprise to anyone.

Both the ruling Georgian Dream and ENM have both criticised the dam protests over alleged xenophobia against Turkey. Rest assured, they are motivated more by the prospect of foreign investment from the Turkish capitalists than concern for the Turkish people.

The Turkish ambassador to Georgia has also expressed grievances toward the movement, stating that the protests against ENKA are directed against Turkey itself. She parroted the government’s own narrative and claimed that xenophobia is the main motive force of the protest. The ambassador then met with the minister of internal affairs, which was followed by mass police mobilisation in Namakhvani.

While chauvinistic and xenophobic sentiments may be expressed by some individuals on the protests, they represent a tiny minority.

This is evidenced by the fact that far-right parties like Georgian Marsh have totally failed to infiltrate this movement, despite repeated attempts to do so, and have been shunned both by the leading protesters and the grassroots.

These slanderous attacks are nothing but an attempt to discredit the protesters’ demands, and blacken their reputation. But by all accounts, this mudslinging is failing to stick.

The police attacked the protestors, forced them to take down the tents, and blockaded the entire territory bought by ENKA making it impossible to access.

Varlam Goletiani, the leader of the protests in Namakhvani, correctly condemned this as a violation of the elementary constitutional right of assembly. In response, the protestors decided to move their protest to the office of ENKA.

The protest was then relocated to the village of Gumati, and Goletiani demanded that they be allowed to peacefully proceed with their activities there.

The government and the police responded by blocking entry to the village of Gumati, preventing sympathisers from entering. Once again, they ordered the protestors to clear out the area and to take down their tents. The protestors refused and were met with renewed threats from the police.

As of now, a new wave of large protests is being planned. The leaders of the movement are beginning to harden their tone, and have declared that if the government continues its policy, they will use any means necessary to stop the building of the dam.

The government has so far spent the sum of 30,000 lari on propaganda, to discredit the protest movement and ‘prove’ that foreign investment and large dams are actually good for the country and the economy.

This is particularly insulting for the Georgian working class, with large layers of the population living in absolute poverty. Approximately 300 children die each year of starvation. The existing state of things cannot be maintained. The simmering anger and resentment under the surface are beginning to bubble to the fore.

We should note, however, that a mass, working-class movement in Georgia still only exists in potential. The dam protests are politically heterogenous, and do not have an explicitly working-class leadership linked to the organised labour movement, nor are they employing methods of workers’ struggle like strikes.

But in the course of their fight with the government, the protestors are going through an important school. What is above all necessary is to arrive at the conclusion that only organised class struggle, which unifies with other sections of the Georgian proletariat in action (like the Chiatura miners), is capable of beating back this development.

Georgia’s different political parties are all in the pocket of imperialism. Since the collapse of the USSR in the 1990s, our most valuable resources and public sector have been privatised and sold off to foreign investors and companies.

The Georgian people must fight for the nationalisation of all the countries’ assets and resources, which the parasitic government will never do. What is needed is an anti-imperialist, working-class movement that will speak for the destitute masses of the country.

Other countries in the Caucasus, and in the entire global south for that matter, are in a similar condition. The Georgian proletariat must recognise the internationalist character of its struggle and reach out in solidarity to their brothers and sisters in the region.

What we are dealing with here are not the “evils” of a specific government or a particular corporation, but with a global system, which ruthlessly exploits the working class and poor worldwide.

Right now, the popular movement is spontaneous, and doesn’t have strong political leadership. In some respects, this is an advantage, since the leaders of the organised “left” in Georgia are either corrupt, servile to capitalism, or concentrated in the NGO sector.

In the short term, the protestors should rely on their own strength, and seek to put their action on a firmer footing. They should establish formal structures, under an elected and accountable leadership, to plan their activities, and organise self-defence against violence from the state forces and ENKA thugs.

The movement should reach out in solidarity to the rank-and-file of the organised working class, bypassing their rotten leadership if necessary. A programme of action and progressive demands should be developed, aiming not just at blocking the dam but at drawing in the wider working class throughout the country.

Ultimately, the protestors in Namakhvani, the workers of Chiatura, the poor, the youth, and the rest of the exploited masses in Georgia need a socialist leadership, which is the only thing that can guarantee the welfare of our people and the sovereignty of our county.

Building such a leadership out of the ranks of the workers in struggle is the most pressing task of the moment in Georgia.