'A company that only makes money is not good business'. pThis phrase from Henry Ford does not appear to be an inspiration for Stephen Odell, the current CEO of Ford Europe. Money seems to be the only reason for its industrial policy, as shownby the announced plant closures in Genk and Southampton (UK).The announcement on October 24 of the plant closures and the layoffs of 4500 workers in Belgium and 500 in the UK are another nail in the coffin of the European automotive sector.

It is clear to everyone that nothing can stop the closure of the Ford plant in Genk (nor in Southampton).Mourning has already begun. Journalists fill the pages of newspapers with editorials, expert opinions, the lamentations of politicians and all fill the television studios. As for the arguments given for the closures, many are given. Flemish capitalists point the accusing finger at foreign companies. For many it is again the fault of globalization and, of course, everyone complains - starting with the NV-A (Flemish nationalist party that won the last elections and that self-proclaimed alternative in Flanders) demand that the government should reduce labour costs. 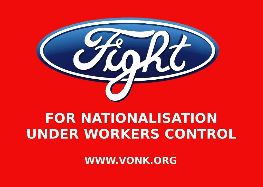 The reasons for the closures are: a combination of the new free trade agreement with Korea and the need for Ford to refocus their production in order to maintain good profit margins. In the last quarter, Ford had before-tax profits of 1.7 billion Euros, an increase of 200 million over the previous quarter. To continue with those numbers it has to close a plant which was already running at 50% capacity and move production to a plant like Valencia, with adapted models and a capacity utilization of 70%.

It is understood that the underlying reason for this closure is the structural crisis of capitalism and overproduction in the economy, especially in the automotive sector.

But the closure of Ford Genk, will have an impact beyond the 4,500 direct jobs destroyed. You have to add the direct providers, traffic in the Port of Zeebrugge and flat steel making at Arcelor Mittal, as well as the jobs of shop keepers in Genk: all suffer the consequences of the closure of the car plant. In total, we are talking about another 5,500 indirect jobs. In the region of Limburg as a whole this will bring unemployment figures to 40,000 at the end of the process.

In the same week in which Ford's closure was announced, there was more bad news. Volvo, in Ghent, is not extending 300 temporary contracts. At the same time, steel companies such as NLMK and Duferco, La Louviere, will cut 600 jobs. Earlier this month, mass layoffs had already been announced at HP, Alcatel-Lucent, Balta, ECS Technics and Arcelor Mittal. After Ford, it was Phillips’ turn to announced layoffs. A real job bleeding is what we see in this country, which in theory has escaped the crisis unscathed.

Excess capacity in the automotive sector in Europe is 30 percent. Car manufacturers close and relocate their factories hoping to maintain their profit margins and compete elsewhere. The policies of Fiat and Volkswagen in recent months reveal the desperation and 'short-termism' which dominates the sector. The agreement with Korea and the entry of low cost Korean models is the underlying reason for such changes.

Germany is the main destination for Belgian exports. But even Germany's economy is slowing down. Many companies which survived the 2008 recession no longer have the necessary financial room for manoeuvre to absorb the current shock. This reinforces the effects of the recession. European austerity policies depress demand even further. Workers who still have jobs chose not to buy new cars. That "requires" new "sacrifices", in Genk, in Southampton and tomorrow in Valencia too.

The reaction of the entire political establishment to the end of Ford Genk was predictable: compassion, sincere tears, condolences (sympathy of dubious origin) and the promise of "maximum support" by the Flemish Minister-President Kris Peeters (which, despite everything, says he is not a Chavez and rules out nationalisation).

Ford workers in recent years have been forced to become more flexible: their wages were cut by 12 percent and they agreed to stay home at times when demand declined. The unions ABVV Metal (socialist) and Metea ACV (Christian) filled the workers heads with the idea that flexibility was the only way to ensure job security…..

The strategy of permanent concessions to the demands of the employers has not overcome the contradictions of the system. That is clear and should be a lesson for other car workers in Europe and also for their unions.

After hypocritical crocodile tears filled whole buckets, we now have the cries of the vultures circling around the corpse of Ford Genk. Everyone talks about "high labour costs", but in fact labour costs represent only 5.5 percent of the total production cost of a car in Genk. According to an estimate by Agoria, the employers' organization in the metal industry, wages in the Belgian automotive sector are also 5 percent cheaper than in Germany. It is rather the pursuit of profit (more than 8 billion profits for Ford) and the fierce competition between companies that explains the reason for the closure.

And as the workers in struggle at Ford Blanquefort (France) say "Today it falls on Genk, Southampton and Dagenham, tomorrow it may fall on Cologne and Valencia." In a letter to the other workers of the industry they explain that the "inevitability" of the plant closure is a myth and that they should fight back.

The sadness and surprise at news of the closure have been transformed into anger and militancy among Ford workers. The workers feel betrayed after having ‘given the best of themselves’ at the price of burnouts and depressions. Now the years old mood of ‘acceptance’ of their fate has changed in a few hours. The factory gates were blocked, automotive parts and assembled vehicles are now held by the unions. 250 workers also went to the European headquarters yesterday in Cologne (Germany) lobbying the European works council and asking for solidarity of their colleagues.There they were treated as hooligans by the German police (See video).

A belgian journalist declared on  television that ‘Ford has sent a massive police force against the workers as if they were gangsters or heavy criminals. On November 11 there will be a national march in support of Ford workers. In this march the entire Belgian labour movement will be present. It's a good first step, but we need a strategy. It is also an opportunity to make international contacts with unionists in struggle at Southampton, and delegations from other countries.

Much attention is given to the need for a social plan and redundancy payments. However, the best social plan is to maintain all jobs and keep the factory open, because in the present context a departure bonus is no adequate response to a reduced monthly income and the need to repay debts. A severance payment is only a plaster on a wooden leg.

If Ford management persists in closing the plant in Genk, as seems to be the case, then the best solution is the requisition of the plant by the government. How? Not by asking Ford nicely for permission to buy their business! The price of Ford Genk has already been paid for some time by the workers through wage reductions and the government through "reduction of social costs" and direct subsidies. The regional Minister-President of Flanders, Kris Peeters, rejected the possibility of the government intervening in Ford. ‘I don’t want to be the Hugo Chavez of Flanders who decides what has to happen with industry’. In saying so he has unwillingly increased Hugo Chavez’s popularity with Ford workers…

Nationalisation of the Ford factory is nevertheless the best solution for the workers. An alternative plan of production for environmentally friendly vehicle manufacturing oriented towards the development of public transport should replace actual production. And for this, the factory cannot be run on capitalist or bureaucratic lines. It must be put under workers’ control and management - put in the hands of the workers, the government and representatives of the consumers.