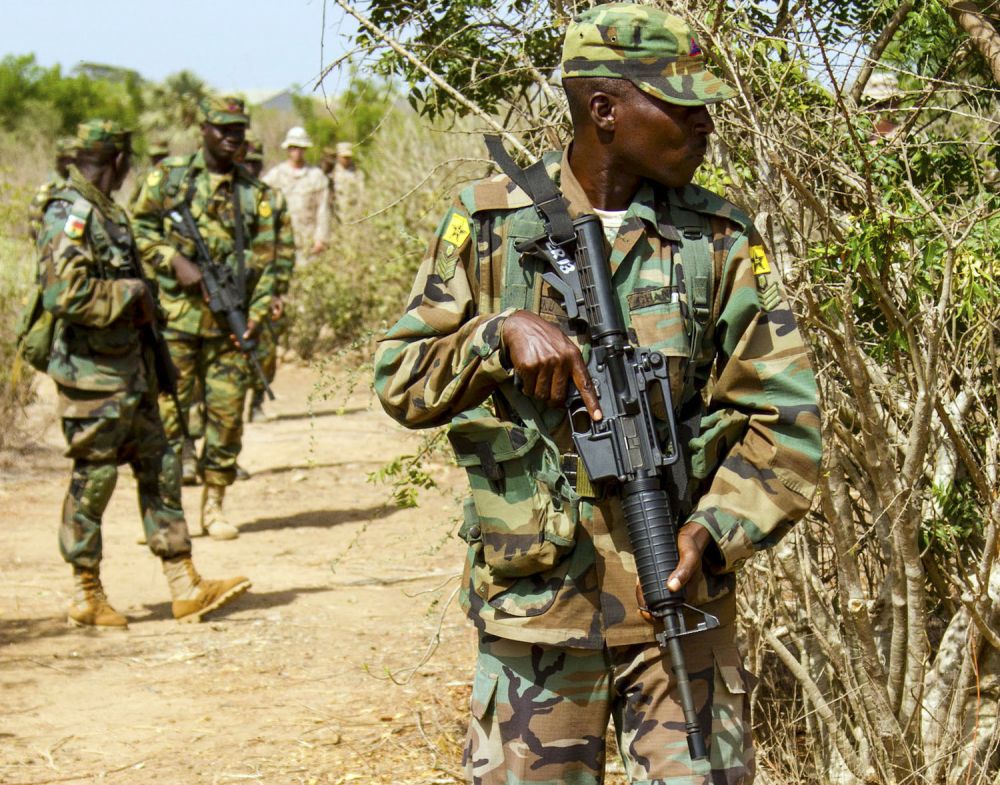 In the same week that Donald Trump is set to become the 45th president of the United States, a maverick of a different sort is threatening to destabilise the whole West African region.

The decision by the dictatorial Gambian President Yahya Jammeh not to step down despite being voted out of office in December 2016 has plunged the country into turmoil. Yahya is supposed to step down on 19 January but is refusing despite initially accepting he lost in the elections in December.

Now The Gambia, a tiny West African country of less than two million people, is threatening to set the whole region ablaze.

The Gambia is now in the midst of a profound crisis which could flare up with potential revolutionary consequences for itself and the region as a whole. This crisis has prompted a united front between the UN Security Council, the European Union, the African Union and the regional body, ECOWAS in an attempt to contain the situation. ECOWAS is now threatening to intervene militarily which could have serious consequences for the whole West Africa region.

Yahya Jammeh came to power through a military coup in 1994. He has ruled with an iron fist and has used every brutal tactic to stay in power for the last 22 years including, kidnappings, assassinations, disappearances, unlawful imprisonment, etc. When asked by the magazine Jeune Afrique in May 2016 about this, he admitted he was a dictator and that he was "proud" of it.

Yahya is also known as a maverick. He claimed he has a direct line to Allah and that he has miraculous healing powers, including the ability to cure AIDS with a concoction of herbs and bananas! Over the last few years this has prompted many to question his sanity. It is of course possible that he has gone insane. Intoxicated by unfettered powers over people over a long time, his behaviour suggests that of a man out of touch with reality. However, in the case of Yahya it is also a method he has used to create an air of mystique around him, much in the same vein as as Kim Jong-Un of North Korea.

But this is an unfortunate time for Yahya. Over the last few years there have been mass revolutionary movements sweeping across the West African region, such as Senegal and Burkina Faso. Seeing this, Yahya tried to introduce some reforms to the electoral system to make it more transparent. For instance, he decided to hold elections as a means of trying to legitimize his rule. He even decreed that the vote count should take place at each voting station instead of at a central location as was the case in the previous experiment with elections in 2011. He also ordered the public counting of the votes and even allowed observers into the counting process.

However, as always the most dangerous time for an autocratic regime is when it lifts the boot and start to reform. His reforms proved to be a huge blunder, as they made nearly all attempts to rig the elections more difficult. By experimenting with elections he also introduced a mechanism through which the people could actually topple him.

This is exactly what happened. On 1 December 2016 the Gambian people rallied and used Yahya's own reforms to vote him out of office. This must be seen for what it is: in a country such as The Gambia with no democratic traditions, the move by the people to move through the electoral plain to remove a hated dictator has had an electric effect.

Immediately after the result was announced, masses of people celebrated in the streets, a sight never before seen in the country. This has stirred the country to its foundations. Faced with this reality and stunned by these developments, Yahya initially accepted the result and even called his opponent, Adama Barrow to congratulate him. "The Gambian people have spoken, and I have no reason to contest the will of the almighty Allah. The country will be in your hands in January 2017 and you are assured of my guidance on your transition and in selecting your new government," he said on a televised address to the country.

All of this had a huge effect on the masses. Then a few days later a senior member of the incoming transition of Barrow mentioned that it could prosecute Yahya for all the crimes he had committed in the past. This prompted Yahya to change his mind about stepping down and thereby he has plunged the country into chaos.

After accepting the result initially he now cried foul. He suddenly discovered "serious and unacceptable abnormalities" in the electoral system which he himself had introduced! He also criticized the electoral commission which prompted the president of this body to flee the country. He then went on to challenge the result in the country's highest court. The only problem is that the court does not have a quorum because he has purged four of its judges.

Now the country has become a powder keg which could explode into a revolutionary crisis if Yahya does not step down by 19 January. The masses have experienced their collective power and will not accept it if Yahya refuses to go. Yahya now faces unprecedented opposition from the previously docile masses.  In other words, The Gambia is in a revolutionary crisis.

The real significance of the Gambian crisis is the effect which this could have on the West African region. Over the last period this region has experienced waves of revolutionary movements in one country after another. The effect that the Tunisian and Egyptian revolutions had on the Arab world is well documented. But what is generally less known is the effect which they had in Sub Saharan Africa, particularly in West Africa.

Following the Egyptian revolution of 2011, a revolutionary movement erupted in Nigeria in January 2012 when the government lifted a subsidy on fuel. The so-called Occupy Nigeria movement had a huge impact in Nigerian society. It prepared the downfall of the corrupt PDP government of Goodluck Jonathan.

The Nigerian ruling class realised the revolutionary significance of this. This is why they organised a “smooth transfer” of power to the administration of Muhammadu Buhari and the APC. This was the first peaceful transition in the history of Nigeria. But now the Buhari administration is itself faced with a profound crisis. The last thing they need is a little country like The Gambia to blow up in a revolutionary storm. This explains Buhari's decision to intervene in the Gambian crisis. Last week the Nigerian Lower House voted to allow Buhari to offer Yahya asylum. There are now serious last ditch efforts to offer Yahya an amnesty before the deadline of 19 January.

The problem for Buhari is that Yahya is such an erratic character that it is very difficult to predict what he is going to do. After his last meeting with the Gambian strongman, Buhari stated that "God alone knows what will happen!" But the West African ruling class is not willing to leave things in the hands of the Almighty! In addition to the carrot approach, the Nigerian military is on standby to intervene as part of an ECOWAS military force. Already troops from the Nigerian Army’s 19th Battalion based in Okitipupa, Ondo State, is on standby for possible deployment as part of the Ecowas Military Intervention Group (ECOMIG).

Another country which was effected by the revolutionary events over the last few years is Senegal. In the midst of rising inequality, sustained unemployment and increasing corruption, the unpopular former president of Senegal, Abdoulaye Wade decided to introduce measures to amend the constitution which would have allowed him to stay in office for another term. But all his attempts backfired. Youth organisations such as Y’en a Marre and M23 took to the streets and mobilized the people to defeat the attempts of Abdoulaye Wade at the ballot box.

After his defeat Abdoulaye Wade fled the country for Paris. The Senegalese experience is directly what influenced events in The Gambia. The Gambian people have essentially based themselves on the events in Senegal in 2012. In fact, until 1989 Senegal and The Gambia had been part of a federation. Senegal also intervened in The Gambia in 1981 to quell a military coup.

In the wake of Yahya's about-turn, Senegal began mobilising troops as part of the ECOWAS intervention force and asked the UN Security Council to back all attempts by ECOWAS to "resolve" the Gambian crisis, including intervening militarily.

The revolutionary events in West Africa over the years have taken different forms. In Burkina Faso there was no opportunity to defeat the regime at the ballot box. With no outlet provided for the accumulated anger in society, the revolutionary storm which erupted in October 2014 took everybody by surprise. Within a matter of 24 hours a mass movement of millions of people engulfed the country. The 27 year dictatorship of Blaise Compaoré came tumbling down. In the country of revolutionary traditions the legacy of Thomas Sankara was reborn. Later the masses rallied again to defeat a coup by a section of the armed forces.

It is these revolutionary events over the past few years which have worried the leaders of the region and other parts of the continent. A revolutionary situation in The Gambia is a serious concern for bodies such as ECOWAS, the European Union and the African Union.

No to military intervention!

The claim that the African Union and ECOWAS are intervening in The Gambia to "protect the will of the people" is false to the core. Both of them are capitalist organisations and both have long term dictators in their ranks. The idea that characters such as Paul Biya, Idriss Déby, Paul Kagame, Teodoro Obiang  Mbasogo and Omar al Bashir have now suddenly become champions of democracy is a really bad joke. These autocratic leaders are ready to intervene in The Gambia for their own selfish reasons. What they really fear is the  revolutionary wave which has swept through the western part of the continent over the last few years. Now they want to intervene by force in The Gambia in order to stop any mass movement from spreading to other regions of the African continent.

The weak African bourgeoisie and their imperialist masters see the crisis in The Gambia as an opportunity to intervene militarily precisely to cut across a potential revolutionary situation. The situation in Nigeria, Senegal and Burkina Faso completely caught the regional leaders off guard while the imperialist powers were stretched by conflicts in other parts of the world. But the ruling class sees that the small size of The Gambia, the lack of a revolutionary leadership, and the ensuing possible collapse into instability, as an opportunity to intervene militarily as a means of strangling the revolutionary movement and prevent it from crossing the borders of the region.

However, things are not so easy. We have already seen the devastation which was caused when NATO, backed diplomatically by the African Union, intervened in Libya. A military intervention in The Gambia could have a similar effect in West Africa. Already tens of thousands of Gambians are fleeing to other parts of the region and even to Europe. A military intervention could speed up this exodus of people and destabilise the entire region.

All attempts by ECOWAS and their imperialist backers to intervene in The Gambia must be strenuously opposed by the world working class. They do not have the interests of the Gambians at heart. What matters to them is self-preservation. The only ally the Gambian people has is the workers, peasants and small farmers in the rest of West Africa and the working class of the world. The task of overthrowing the regime of Yahya Jammeh belongs to the Gambian people.

No to military intervention by ECOWAS!

The overthrow of the Yahya regime is the task of the Gambian people!

Long live the struggle for Socialist West African republics as part of an All African Union of Socialist Republics!