Globalisation
Share
Tweet
The G20 is in process as we go to print. Yet we can already make predictions as to the outcome of the talks. The poor will gain nothing from the summit. 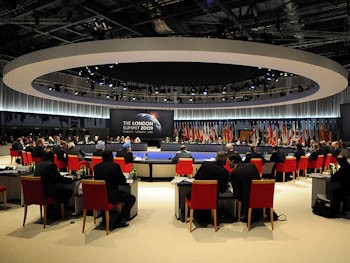 The G20 is in process as we go to print. Yet we can already make predictions as to the outcome of the talks. The poor will gain nothing from the summit.

The Global Monitoring Report from Unesco estimates that as a result of the slump the 390 million poorest Africans will see their income drop by around 20% - far more than in the developed world.

The global financial crisis has seen a fall in commodity prices and a drop in investment flows to poorer countries. The report's authors - Kevin Watkins and Patrick Montjourides - estimate this will cost sub-Saharan Africa's poorest people $18bn (£12.8bn), or $46 per person.

The study also highlights tragic future developments, such as the prospect of an increase of between 200,000 and 400,000 in infant mortality. Child malnutrition will be one of the main drivers of higher child death rates. "Millions of children face the prospect of long-term irreversible cognitive damage as a result of the financial crisis," says Montjourides.

Unesco reckons poor countries will need around $7bn to meet key education targets which form part of the goals. It sounds like a lot of money. Compare that with the $380bn of public money pumped into banks by rich countries in the fourth quarter of 2008!

In the discredited ideology of neoliberalism poor countries were always being told to rely on trade not aid. But trade, and capital flows from the rich countries, are drying up as times get tough. The Institute for International Finance predicts that capital inflows will be just $165bn (£116bn) this year, just half the $466bn inflow of 2008 and one fifth the 2007 level. 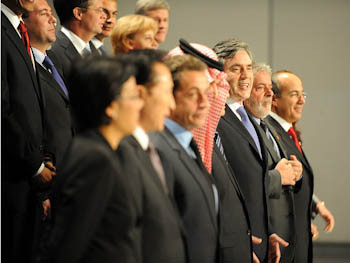 It is probable that the IMF will be given more funds and more power to intervene in the affairs of poor countries. But when did a poor country ever welcome the IMF (the financial sheriff) turning up on its doorstep?

Since billions of people are absolutely up against it already, a slide into deeper poverty could have violent political and social repercussions. Even hard-faced World Bank officials warn of the dangers and beg for concessions. "We have to look at the impact of this on low income countries. Otherwise, without wanting to sound alarmist, social unrest and political crisis could be the result. It's in the self-interest of everyone to prevent that," states Okonjo-Iweala of the World Bank.

The world’s poor face catastrophe. "Tens of millions of people will be forced back below the poverty line. There will be irreversible effects on the very poorest," said Simon Maxwell, the Overseas Development Institute's director.

Any claim in behalf of the poor has to be framed in terms of enlightened self interest. There’s no point appealing to the rich and powerful out of the goodness of their hearts. All they are interested in is restoring big business to profitability. That is why anything they offer the poor will be too little, too late.


We’ve been here before

The G20 meets at a time of the greatest economic crisis since the 1930s. In the depths of the 1930s depression 66 nations came together in London to chart a way out of the mess and misery. They knew that if they didn’t hang together they would hang separately. Yet the World Economic Conference of 1933 collapsed. Why? 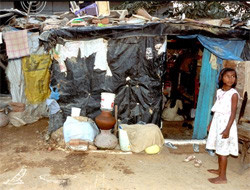 In a recession, output falls. Someone has to take a cut. The capitalist class tries might and main to make sure it is not them. In every country they turn on the working class and try to dump the consequences of their system on to their backs. But they also try to pass the burden on to each other. Intensified competition breaks out between individual capitalists and between different capitalist nation states. In the 1930s this took the form of tit for tat devaluations (which makes the devaluing country’s exports cheaper and imports dearer) and beggar-my-neighbour tariffs on foreign goods, intended to have exactly the same effect. The overall effect of this was to dry up world trade and wound all the capitalist nations collectively in the process.

Now they are pledging ‘never again’. Yet, despite the pledges, they are embarked on the same road as in the 1930s with the same likely consequences. The 1933 Conference met in the Geological Museum. It seems that it wasn’t just the exhibition cases that were full of fossils. The jostling between the capitalist powers meant a collective resolution of their problems was impossible. Argument began as to the agenda. Lord Vansittart commented, “We find that discussion of war debts, reparations and tariffs might be difficult at the World Conference. We could present Hamlet without the Prince of Denmark, Ophelia and Polonius; it would be shortened. So would the Conference. Failure was assured.”

This was capitalist anarchy in action. Even before the G20 met the EU countries have had a falling out over economic policy. When we confidently predict that the G20 will achieve nothing for ordinary people, we know that from the very nature of capitalism as a system.