Globalisation
Share
Tweet
As the leaders of the ‘free world’ at the G20 summit sit down to champagne, caviar and the grand task of ‘solving the economic crisis’, the last thing likely to be on their minds are the wars in Iraq and Afghanistan. Two shattered countries with no infrastructure and over one million dead and they tell us that 'the objectives have nearly been achieved'!

As the leaders of the ‘free world’ at the G20 summit sit down to champagne, caviar and the grand task of ‘solving the economic crisis’, the last thing likely to be on their minds are the wars in Iraq and Afghanistan. The new administration in Washington triumphantly tells us that Iraq is stabilising and that the conflict in Afghanistan is 'winnable'. Two shattered countries with no infrastructure and over one million dead and they tell us that 'the objectives have nearly been achieved'! 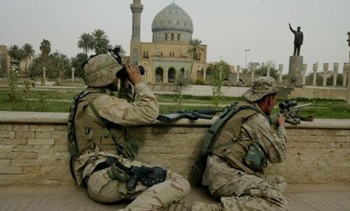 U.S and British imperialism went into the Middle East on the flimsy pretense of fighting terrorism and bringing peace, plenty, milk and honey to the region. Really these imperialist conquests were for control and resources and to reign in increasingly uncooperative governments in Baghdad and Kabul. But importantly the U.S had the aim of hegemony over the Middle East and to have stable countries in which to put military bases from which 'police action' could be launched against anyone less in the region who got too big for their boots. In short, the US' plan was to entrench their position as sole merchant, banker and gendarme in the Middle East.

Looking back at these plans, it now seems utter fantasy. The war was to create ideal conditions for US business to strip the region of its remaining natural resources and to ensure the US military could out-gun anyone (e.g Iran) who may dare challenge it. But now we know that it didn't work out like that. In great part because of the neo-con clique's incompetence, both Afghanistan and Iraq have descended into chaos, and that’s certainly no good for business. 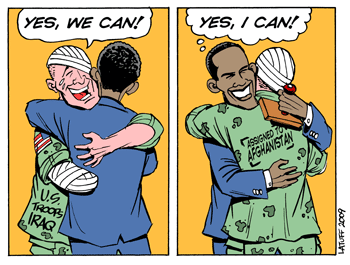 Obama's real motive for pulling out of Iraq is to be able to afford to stay in Afghanistan. Drawing by Latuff.

In both countries imperialism has over-stretched itself. There aren't enough troops or the money left to keep these costly occupations going. That’s Obama's real motive for pulling out of Iraq: to be able to afford to stay in Afghanistan. In the same vein the reason for the crisis of capitalism we now see all around us is that the system has over extended itself, just as it has in its neo-colonial adventures. They now have to make severe cut backs across the board (with the exception of bankers' bonuses) just to keep afloat. The war and the crisis are two symptoms of the same disease. It is the banks and big business owners, the masters of this crooked capitalist system, that drive the war machine to extend their influence and push up their profits. As the crisis deepens we will see more wars as the capitalists of various nations scrabble win more markets and resources. In a time of scarcity no compromises will hold. This has already begun: Gaza and Georgia are a taste of the type of small, but bloody skirmishes that are on their way. Here is the contradiction at the heart of it all, they can't afford to fight but have to just to keep themselves in the black. It's a contradiction that the system cannot solve. It’s like capitalism has hit against a brick wall and it’s trying to bomb its way through.

Socialists must stand firmly against these imperialist wars and continue to demand a complete withdrawl from Iraq and Afghanistan. But we understand at the same time that under the capitalist system war is inevitable. For it is not really the war-mongering politicians that cause wars - they are only puppets - but the bankers and the capitalists. It is not the rich that lose their jobs, or are sent to die 'for their country', nor are they the ones that lose their families to US or Israeli shells. No, it is ordinary working people whether in Britain or America, Iraq or Afghanistan. Our fight is the same and it is the same enemy we are fighting. War and economic turmoil and symptoms of the same disease and they need a single cure: we need to fight against war but in the same breath make the call for socialism.