France
Share
Tweet
At the end of January French students were out of the classroom and back on the streets. On January 29, students and teaching staff joined in the national strike that had an estimated 2.5 million French workers marching in the major cities to prove to President Sarkozy that his provocative remark in the summer of 2007- ‘These days, when there’s a strike in France, nobody notices,’ was as wrong as it was rash. [This article was originally published on February 9.]

French students are out of the classroom and back on the street. On Thursday, 29th January, students and teaching staff joined in the national strike that had an estimated 2.5 million French workers marching in the major cities to prove to President Sarkozy that his provocative remark in the summer of 2007- ‘These days, when there’s a strike in France, nobody notices,’ was as wrong as it was rash. In the afternoon of the same day 53 out of France’s 85-odd universities voted to continue their own strike indefinitely. Ten days later they show no signs of backing down, with up to 74 universities now affected and the action due to carry on until at least the 11th.  French students are angry, and they’re determined that this year, everyone will notice. 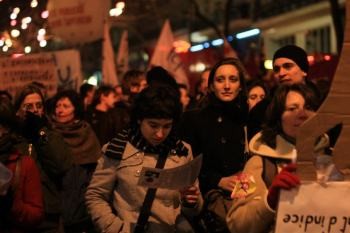 On January 29, students and teaching staff joined in the national strike that had an estimated 2.5 million French workers marching in the major cities. Photo by yupa on Flickr.

There’s nothing new about the universities going on strike. In November and December 2007, students also joined the wave of national strikes, and many universities were blockaded for up to four weeks to stop plans to fund universities privately. In March 2006 many students occupied their campuses as part of national protest against the proposed ‘Contrat Première Embauche’, the ‘First Employment Contract’ that threatened young workers’ rights. ‘We’re used to it,’ says Louis, a third-year music student at Université François Rabelais, Tours. ‘Last year the strikes led to my university being blockaded and disrupted weeks of class. But I’m here today because we have to draw a line somewhere.’

So what makes this year different? The reforms now on the table are named after the Minister for Higher Education, Valérie Pécresse, and they will primarily affect students on France’s prestigious teacher training course, the CAPES [Le Certificat d’Aptitude au Professorat de l’Enseignement du Second degré, the teacher-training programme for secondary-level teachers]

The Pécresse reforms plan to reduce CAPES funding significantly, by shortening the two year programme to one year, stopping the year’s paid work experience, and forcing CAPES students to share lectures with Masters’ students of their discipline in order to reduce teaching time. 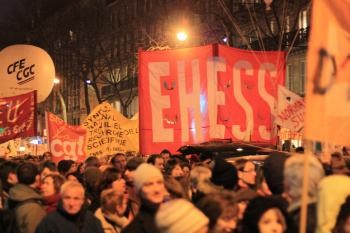 French students are angry, and they’re determined that this year, everyone will notice. Photo by yupa on Flickr.

These measures will bring an estimated 900 job losses in the higher education sector, and threaten the status of the researcher/lecturers who remain. Many will have to give closer accounts of the way their research time is spent, and could face increased teaching time of up to a hundred per cent. ‘They’re not just threatening our positions as researchers, but the capacity of the university to give all students an education backed up by up-to-date, fresh research,’ says L.R., Professor of Sociology, Aix en Provence.

The longer-term effects of the Pécresse reforms will be to devalue teachers in secondary education. The CAPES has always made sure that only the number of teachers needed in schools pass the course each year. The reforms will turn this carefully controlled system into a free market, with some teachers worse qualified than others and therefore more vulnerable to attacks on their job status by the state, which will surely be the government’s next move.

Teachers and students have come together with unprecedented solidarity to oppose the Pécresse laws. Since November 6th, one-day walk-outs and demonstrations across the country have shown an unusual level of inter-faculty and inter-university cooperation. Teaching staff in many universities voted through an administrative strike, meaning marks are withheld from students. The movement has been reported widely in both local and national press, but the government has shown no recognition and until now university presidencies have remained equally unhelpful. 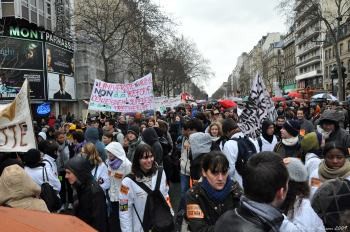 On 10 February a massive demonstration was held in Paris in protest against the French government's plans for education. Photo by ptit@l on Flickr.

Now general assemblies in every university have voted to up the ante. Around 50% of university-level classes were cancelled in France last week. And this year the dominant aim is to spread the word. Meetings in Tours’ Université Francois Rabelais, where every faculty except music and medicine is on strike, tend to focus on methods of gaining support and ensuring eventual victory, rather than on just stopping the university from working. Although the main student unions such as UNEF and SUD Etudiant are clearly present, and the campaign has the support of France’s 5 main union confederations, every decision is taken by a general vote by students and staff, usually following, but not necessarily in agreement with, a teaching staff vote.

Last year, even in this traditionally very radical university, the only way to make the strike effective was to block the entrances to university buildings. This year many teachers and students are supporting strike action for the first time, and general assemblies are filling 1000-capacity auditoria to bursting point. Everyone wants to be involved in voting through actions, distributing leaflets or just finding out up-to-date news on the movement’s progress across the country.

Also new this year is the involvement of the Tours Institut Universitaire de Technologie (IUT) in the movement. The IUTs, French technical and vocational universities, not unlike our old polytechnics, face having their entire budget diverted into the ‘real’ universities to allocate as they wish, a move that is certain to leave them out of pocket. Although they rarely strike, they are currently joining many university protests and look likely to schedule strikes for one or two days next week in many cities.

At the beginning of the second-week of strike action the movement is becoming more and more organised. Alternative classes in activism and discussions on how the universities can be improved are taking place in university class-rooms. ‘We’re not just fighting a reform but a whole system,’ explains Clarisse, 19, a first-year psychology student. ‘A huge accumulation of frustration has contributed to a universal rallying of students right across the country. We’re fighting a type of politics that tries to conquer by dividing people, but last week was the beginning of a inter-union movement.’ 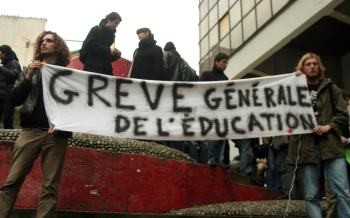 The power of the strike is already beginning to show its effects. Photo by farfahinne on Flickr.

The power of the strike is already beginning to show its effects. Many university presidencies have now declared their opposition to the Pécresse reforms, despite most not giving their formal support to strikers. In Tours the President has consented to a formal day of protest for Tuesday 10th February, when massive crowds are expected to rally in Paris. Surely the government will soon be forced to admit that strikes in France do not go unnoticed- in the past they have brought down governments.

Sarkozy has received at least one message he can’t ignore - the national newspaper Libération reports that on Monday, 2nd February in a private meeting with heads of Paris universities, the president was addressed by Axel Kahn, president of Paris V University and well-known scientist: ‘Mr. President of the Republic, you will not succeed in passing this decree.’ Sarkozy has already proved himself a slow learner when it comes to listening to the French public- meanwhile, university activism is just getting more organised and more powerful.