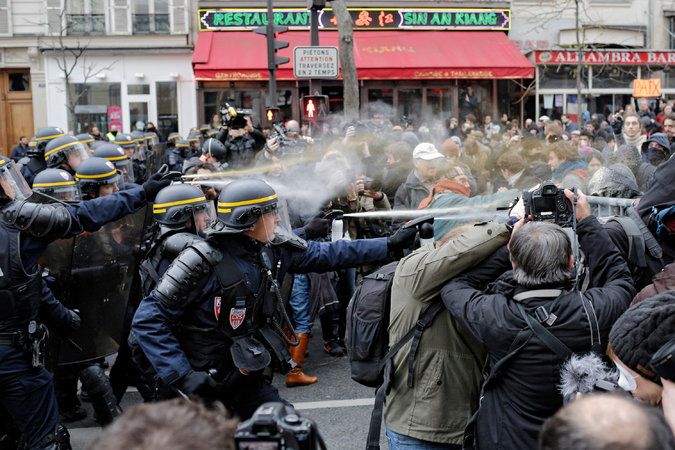 The French ruling class have cynically used the recent terrorist attacks as an excuse to clamp down on any dissent whatsoever across the country. The attacks by ISIS have been used opportunistically by president Francois Hollande, the most unpopular president since the 1950s. Increasing austerity and the deepening crisis has led to tensions reaching boiling point, as seen with the recent dispute at Air France, where bosses were chased out of their offices by workers facing redundancy. Although the declared aim of the State of Emergency is to combat terrorism, the French state has wasted no time in seizing the opportunity to attack those on the left.

The State of Emergency gives exceptional powers to the French State, including the prohibition of all demonstrations; the right to set curfews; powers to limit the movement of people; and the power for the police and security services to act without any judicial authority. This is the first time such powers have been granted, since a group of army generals attempted a coup d’état in 1961.

It is as if Christmas has come early for the French police, who began a campaign of terrorising environmental activists ahead of the COP21 Climate Conference in Paris this month. Not content with banning the mass demonstration against climate change, part of a worldwide protest on Sunday 28th November, the police raided the homes of numerous activists, arrested them, and placed them under strict controls.

One raid in the city of Rennes, saw the police burst into the home of six left wing activists, armed with shotguns and assault rifles. The residents were violently pinned to the ground, before being issued with restraining orders. The terms of the orders prevent them from leaving their city, and require them to register with the police three times a day. On top of this, they are not allowed to leave their home between 8pm and 6am. Such police terror is to be expected in China, but has no doubt come as a surprise to many in “democratic” France.

Despite this, thousands defied the protest ban on Sunday, and marched on the streets of Paris against climate change. They were met with the full might of the French state, who launched tear gas and sound grenades at the protestors. Although the bourgeois press blames the police response on “violent anarchists”, videos from the protest clearly show the police attacking peaceful protestors and journalists with batons and tear gas. By the end of the day, 341 people had been arrested.

Thus the smiling mask of bourgeois democracy has been lifted to show its true face. In the name of “fighting terrorism”, the ruling class are seizing the opportunity to attack workers and youth who are prepared to speak out. This is a taste of things to come as the class struggle heats up. It shows that all the talk of “liberté, égalité, fraternité” is hot air, when the ruling class feels that it must defend its interests, such “niceties” are brushed aside. Workers and youth must organise to resist these attacks, and build a movement for socialism that can finally do away with the oppressive bourgeois state entirely.