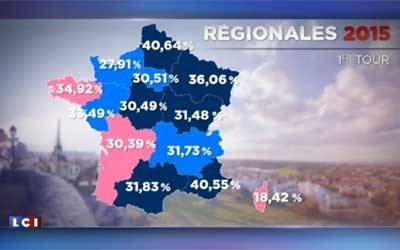 In the first round of the French regional elections the right wing nationalist party, National Front, came out as the largest party. Here we publish the first comments by the French Marxist journal Révolution.

The results of the first round of the regional elections confirms and accelerates the electoral dynamic which was already evident during the intermediate elections since 2012. The attacks of November 13th obviously aided the National Front (FN) in this new breakthrough. But all of the factors had already been coalescing and and pushing in this direction. The FN benefits from the capitalist crisis, the continued growth of unemployment, austerity measures implemented by the ‘socialist’ government, the discrediting of the party of Nicolas Sarkozy – and finally the incapacity of the Left Front to offer a credible alternative. All of these combined factors also explain the high level of abstention, which affected one in every two voters.

At the national level, the FN leads with 28% of the vote, ahead of the right-wing alliance LR-UDI (27%) and the PS (23.5%). It is difficult to add up the results for the Left Front, which was divided in two large regions and allied with the EELV in others. But this is a very bad result. According to L’Humanité today, “added up, with 10-11% of the vote at a national level, the result of the EELV and the Left Front (…) is a decline from 2010 (18%).” These results and the prospect that the FN won many of the regions constitute a new shock for many youth and workers on the left. They are worried and want to understand.

In response, yesterday evening we saw the discredited politicians of the Socialist Party and the Republicans defending in the same voice the “Values of the Republic,” the same values which are apparently compatible with poverty, exploitation and the destruction of social gains. The same game has been played following each post-2012 election: those who are actually responsible for the rise of the FN are shocked and chagrined by the party’s repeated electoral success, calling for a swift response to counter the far right. How? By getting themselves even more entangled in pointless politics, which also ends up helping the FN. Another tactic, according to some, is found in forming a “republican front” against the FN – a front filled with all the discredited politicians. In an editorial written by Laurent Joffrin in Libération, the logic behind a republican front is summarized perfectly: “In these circumstances, the ‘lesser of two evils’ principle becomes essential. Between the right and the far right, one must chose the lesser evil. Every republican must understand that the worse is ahead of him. And he must do everything to avoid it.”

The idea that Sarkozy’s party is a “lesser evil” will be welcomed with much skepticism by the millions of young people, unemployed people, workers, and retirees who are victims of the recession and the reactionary policies of successive governments. The withdrawal of PS candidates to the benefit of the Republicans will not weaken the FN. To the contrary, it will strengthen it by backing up its claim that there is a “regime” of collusion between the right and the PS.

The leadership of Left Front also bears some responsibility for the FN’s electoral success. In his December 2nd blog post, the spokesman for the Left Front, Jean-Luc Mélenchon, explained: “The regional elections see our front become an unintelligible throng nationwide at a moment when we most need clarity, determination, and a united left-wing opposition. That is, if the left wants to be heard by normal people.” Yes. Once again, party functionaries have compromised the unity and clarity of “the left-wing opposition” for the sake of politics.

The leadership of the French Communist Party has called upon its candidates to merge with the PS for the second round of this election, as soon as they can, without proposing any political conditions to these mergers. The idea of such conditions doesn’t even come to mind for them. It seems that they would be open to these mergers even if the PS was destroyed by a hail of meteorites. What are they seeking to accomplish with these fusions? To “rally the left against the right and the far right”. This model is not only lacking; it has now become a bad joke. This farce will find no support from the huge number of people who want to send the PS, its counter-reforms, and its austerity to hell. Nevertheless, the leadership of the Communist Party has yet to figure this out. They want to save as many of their elected seats as they can, of course. But they will certainly, just like before, lose many of their seats after all the ballots are counted in these regional elections. The leadership has become used to this, though. This downward trend is now familiar to them and has been for decades. Furthermore, the leadership of the party is not conceiving any alternatives to this vicious cycle that continues to weaken and marginalize their organization.

The congress of the French Communist Party, coming up in June, will offer the occasion for the party to review the results of this suicidal strategy. For the time being, the members of the Left Front must put pressure on the Communist Party to not carry out the unprincipled merger of their candidates with the election efforts of the Socialists. It’s better to win zero seats than to once more offer the image of an unprincipled alliance between the Left Front and the PS, a party that has been discredited in the eyes of the masses – and especially in the eyes of the working class.

The “observers” and other experts are going to be writing about the “rightward shift” of French society. In reality, half of French society didn’t even vote – abstention was especially high amongst the youth and the poorest members of the working class. Additionally, many voters see a vote for the FN as a way of expressing their discontent with the entire political system. These voters aren’t really voting for the FN as much as they are voting against the status quo. Many of them would even vote for a left-wing opposition that cleanly separates itself from the Socialists and grants itself an offensive program. Due to the successive errors of the leadership of Left Front, the exasperation of the masses has yet to find a way to express itself through the left of the political spectrum. At this stage, this exasperation expresses itself through the FN – and above all, abstention. Yet, the potential for a serious “left-wing opposition” is still there and it is colossal. Just like in Spain, the United Kingdom, Portugal, and elsewhere, this potential will end up making something of itself.