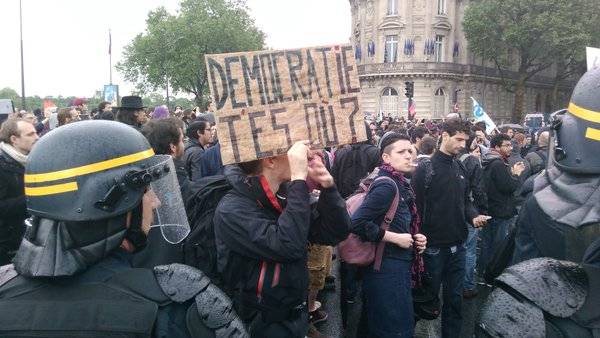 On Tuesday, May 10th, French PM Valls was forced to use emergency powers under article 49.3 of the constitution to pass the hated El Khomri labour law, as a rebellion in the ranks of the Socialist Party parliamentary group had made it impossible to get the necessary votes to pass it in parliament.

There were spontaneous protest gatherings outside the national assembly (see picture) and in other cities around the country to protest this violation of normal "parliamentary democracy". In Paris the call came from the #NuitDebout movement, as well as local trade union branches. Protesters were enraged at what they rightly considered a violation of democracy and chanted slogans like “National Assembly, Capital’s Assembly - the real democracy is here [on the streets].”

In Toulouse a joint appeal from the unions and the local #NuitDebout managed to gather over a thousand people at very short notice.

Finally, the law was passed without a vote through the use of article 49.3. The move reflects the extreme weakness of the government in the face of mass opposition against the law, including 4 national days of action on March 9th and 31st, and April 9th and 28th. The Financial Times commented: “The drastic move underlines Mr Hollande’s political weakness and the tensions tearing apart the left a year before presidential elections.” The movement against the counter reform of the labour law has mobilised hundreds of thousands of workers and youth, becoming the focal point for opposition against a government of the “Left” carrying out right wing austerity policies.

In this case, as previously in Greece, we see how the enforcement of brutal austerity policies to make the workers pay the price for the crisis of capitalism enters directly into conflict even with the limited character of bourgeois democracy. The response should be not so much that we want to restore bourgeois democracy to its full meaning, but rather to understand that real democracy is not compatible with the dictatorship of Capital.

The only way now to stop the El Khomri “reform” from coming into law is a motion of censorship against the government which has been tabled by the right wing and has to be discussed on Thursday. The "Socialist" government hopes to blackmail left critics of the law and rebels in its own parliamentary group into not voting with the right wing opposition, but it is not clear what will happen. The leader of the Front de Gauche, Jean-Luc Mélenchon, has said that he would like to see a motion of censorship proposed by the left, but if that is not possible, he calls on all deputies opposed to the law to vote in favour of the censorship proposed by the right. Some rebel socialist deputies have indicated their willingness to vote against the government. The PS leaders have threatened anyone voting against with expulsion from the party and a ban from standing on the party's ticket in the election.

Trade unions and student organisations have called for yet another national day of action and strikes on Thursday May 12th, and threaten more action on the 17th and 19th. However, the strategy of the union leaders is one of calling for an endless succession of "days of action" and 24h strikes, with the aim of wearing down the whole movement. After 4 such national days of action, it is clear that the government will not back down unless it is faced with action that is stronger.

The trade union statement (signed jointly by CGT, FO, FSU and Solidaires and the student organisations UNEF, FIDL, UNL) is extremely vague in this respect. It talks of the need to “amplify and strengthen the mobilisation” but says nothing specific about how to do so. It “invites” the local branches to “organise mass meetings with the workers to debate what kind of actions, about strike and about its all out character”. Instead of giving a clear lead, the trade union “leaders” are passing the bucket to the trade union activists in each factory and workplace. This is the opposite of leadership.

The statement further says that the trade union “do not rule out any kind of initiatives for the following weeks, including a national demonstration” and adds that the organisations will meet “at the beginning of next week” to decide on that. This is hopeless as the law has already been passed by government yesterday and now depends on a motion of censorship to be debated tomorrow. Next week will be too late!

Only the development of a powerful all out strike movement can turn the situation around. The mood amongst the worker, and particularly the youth, is very angry. The provocation of passing the law by decree could spark such a movement.