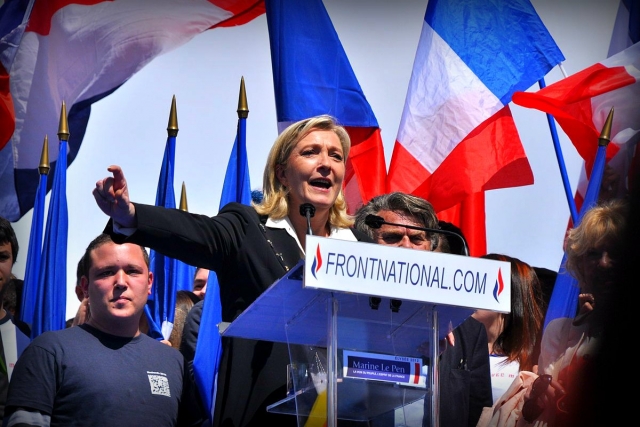 The results of the first round of the presidential election open a new phase of the political crisis in France. As in April 2002, the second round will be between the right and the far right. But much has changed since then. The economic crisis of 2008 has taken place. The probable victory of Emmanuel Macron, in two weeks time, will not lead to the relative political stability that Chirac benefited from in the wake of his victory in May 2002.

The recomposition at work on the whole political scene opens a period of major uncertainty and instability. The legislative elections in June will be the first illustration of this. There is no guarantee that they will give the head of state a strong parliamentary majority.

No to the so-called “Republican Front”!

The bourgeoisie, its politicians and media outlets are all relieved: they avoided “the worst,” from their point of view, namely Jean-Luc Mélenchon going into the second round. Now they are going to form a vast “republican” choir calling for a vote for Macron to “block the National Front.”

The leaders of the Socialist Party, the Greens, and the Communist Party are advancing the same slogan. We reject it because it is absurd and counterproductive. It is the crisis of capitalism, mass unemployment, and the reactionary policies of successive governments that explain the growing success of the “anti-system” demagogy of the National Front (FN). Macron proposes to pursue and aggravate the policy of social regression carried out by Hollande and Sarkozy: the massive destruction of civil service jobs, destruction of the Labour Code, dismantling of public services, tax breaks and subsidies of all kinds for the benefit of the great capitalists, etc. Throughout the campaign, Macron hid his programme under a “centrist” veil and many hollow words. But he is entirely devoted to the interests of the ruling class, which demand a drastic policy of austerity.

Among the voters of the FN there are many workers and unemployed who are enraged by the economic crisis and the corruption of the traditional political elite. Over the past 30 years, they have seen the rise of right-wing and left-wing governments, which have led to the implementation of the same antisocial policies.

Marine Le Pen relies on this concrete experience when denouncing the collusion of the “establishment parties,” starting with the Socialist Party and the Republicans. This is the meaning of her attacks on the “UMPS” [describing the Republicans (the former UMP) and the Socialists (PS) as one and the same], a formula that is resonating with some of the most exploited and oppressed sections of the population, because it corresponds with the reality of their own experience.

In this context, the “Republican Front against the FN”—ranging from Pierre Laurent (the leader of the Communist Party) to François Fillon (the Republican candidate in the first round)—is denounced by Marine Le Pen and her acolytes as a new manifestation of the “UMPS.” They say, “See, all those parties of the Establishment are abandoning their pseudo-differences and uniting against us. This is the proof that we are upsetting the system and that we are its true opponents!” This is the first result achieved by the calls from the “left” to vote for Macron. It is a serious mistake, particularly unacceptable on the part of the leaders of the Communist Party (PCF), and which is rightly causing some dissatisfaction in the ranks of the party.

Jean-Luc Mélenchon announced that 450,000 supporters of the France Insoumise (Rebellious France, FI) would be consulted on the position to be adopted for the second round. They can vote online until Tuesday, May 2, at 12:00 pm, by choosing between three options: 1) spoil the ballot; 2) vote for Macron; 3) abstention. We take part in this consultation and call for abstention.

The FN is a dangerous enemy that must be fought. But we do not fight a fire by voting for the arsonist. The labour movement must fight the FN with its own methods and on the basis of a radical left programme which tackles the root of the problems: the control of the economy by a handful of extremely wealthy parasites. In the days to come, the political and trade union organizations of the labour movement must massively mobilise in the street against the right and the extreme right. May Day must take place under the flag of the fight against the reactionary programmes of Le Pen and of Macron. The trade union leaders should put on the agenda a 24-hour general strike.

The passing of Macron and Le Pen to the second round must not overshadow the major event of this presidential election, namely the enormous success of the campaign of Jean-Luc Mélenchon, which received 3 million votes more than in 2012. His performance is the continuation of the series of upheavals that have recently marked the European (SYRIZA, Podemos, Corbyn) and American left (Sanders). This is an international phenomenon with a clear meaning: a growing number of young people and workers are looking for a left-wing alternative to the crisis of capitalism and to politicians who have been in power for decades without changing anything, or changing it for the worse.

The deep crisis of the capitalist system leads to political polarisation—to the right, as shown by the FN result, but also towards the left.

The electoral collapse of the Socialist Party (PS) is a striking illustration of this. Benoit Hamon has paid the price for the labour law and austerity policies of the Hollande government. He also pays for his own moderation and two years of participation in government. At the end of the PS primaries, Hamon could have relied on his clear victory to launch an offensive against the right wing of his own party. He preferred to seek a “central” position. As a result, he found himself in the middle of a chasm.

Mélenchon’s campaign has generated enormous enthusiasm among large sections of the population. In particular, the number of young people present at the meetings of the Rebellious France was impressive. 30% of voters aged 18 to 24 eventually voted for Mélenchon!

This radicalisation of the youth—which is also an international phenomenon—will have profound and positive consequences for the future of the Left. In this respect, one of the stakes for the coming months is to organise the mass of the “rebellious” into a democratically structured party. It will be the best way of consolidating and developing the Rebellious France, and of attracting under its banner the most militant elements of the youth and of the working-class movement.

In the immediate future, we must mobilise to give the Rebellious France the widest representation in the National Assembly in June. The game remains very open. We must build on the powerful momentum of the past few months to develop an aggressive campaign nationwide. Mélenchon achieved excellent results in many cities throughout the country, including Lille (29.9%), Toulouse (29.2%), Montpellier (31.5%), Marseille (24.8%), Rouen 26%), Nantes (25.5%), Le Havre (29.8%), Strasbourg (24.4%), Lyon (22.9%), and Bordeaux (23.4%). He comes close to or exceeds 30%—sometimes even 40%—in many medium-sized cities with a high concentration of workers, especially in the suburbs of Paris. These figures highlight the colossal potential of the Rebellious France.

In Spain, “Unidos Podemos” has gained a strong presence in parliament (71 seats). But the PSOE (the Spanish Socialist Party) has not experienced a collapse on the electoral level comparable to the one suffered by the French Socialists. In the legislative elections of December 2015, the PSOE still won 22% of the vote and by doing so it managed to retain 90 seats (of the total 350). In France, the PS share of the vote collapsed to 6.4% on April 23. Now the PS is going to engage in alliances with Macron’s “En Marche,” that is, with an objectively right-wing movement. This situation will inevitably open up an even greater space for the candidates supported by the Rebellious France, which would represent one reason more not to call for a vote for Macron in the second round of the presidential election.

Révolution has supported the candidacy of Jean-Luc Mélenchon since the launch of the Rebellious France in February 2016. We are part of this movement. The emergence of a powerful left-wing alternative to the PS is a very positive development to which we are committed.

At the same time, we believe that the debate on the Rebellious France programme should continue. It is a progressive programme, the implementation of which would determine potentially a very significant rise in the standard of living of the vast majority of the population. But there is a problem: this programme is not applicable in the context of capitalism in crisis. The big capitalists would resort to all their power to prevent it from being implemented.

We had a very clear idea of what that means during the last two weeks of the campaign for the first round, when Mélenchon’s rise in the polls earned him savage attacks, around the clock, by the supposedly “free and independent” mass media. They have evoked the spectre of a recession. The powerful were demonstratively showing their readiness to pack up their wealth and leave the country. These were not just forms of pressure, but implicit threats. If Mélenchon had qualified for the second round, the capitalists would have immediately warned that their future investments in the French economy were to be subordinated to the continuation of a policy of counter-reforms and budget cuts.

To those who tell us that austerity is the only policy compatible with capitalism in crisis, we must answer: precisely, the struggle for progressive reforms must go hand in hand with the struggle against capitalism itself, for expropriation of the main means of production, for the socialist transformation of society!

It is necessary to complete the programme of the Rebellious France by integrating it with measures aimed at breaking the economic power of the ruling class.

Massive mobilisations in the streets against Le Pen and Macron!

Mobilisation for a “rebellious” National Assembly!

For a programme breaking with capitalism!