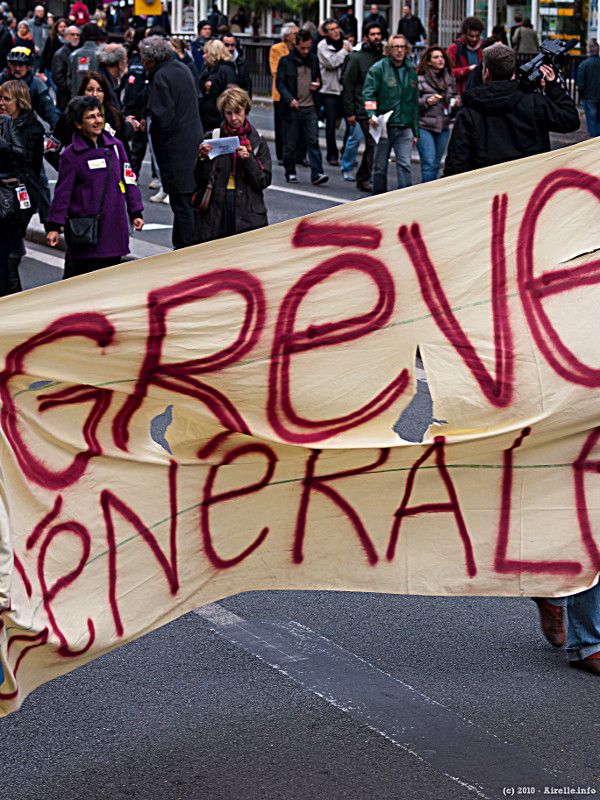 In October we witnessed a massive mobilisation of the French workers and youth against Sarkozy's attacks on pensions. All the potential was there for the government to be defeated. The overwhelming majority of the population supported the protests. So what was missing? We are publishing an a analysis by the French Marxists of La Riposte to explain what happened and why it happened.

The struggle against the attack on pensions showed that the immense majority of the population are opposed to this counter-reform. The participation in the main days of mobilisation was as many as 3.5 million demonstrators. Alongside these day-long mobilisations, a numbers of indefinite strikes took place around the country. “Small” demonstrations - of between two and three thousand people - took place in many small, provincial towns, where as much as a quarter of the local population were on the streets. Across the country school and university students leapt into action. These mobilisations were often accompanied by walk-outs by employees in local businesses, hospitals, public administration, and schools. The country was in turmoil.

At the height of the demonstrations the opinion polls showed that 70% of the population supported them. This support was often active, as shown by the statement of Marcel Croquefer, CGT (Confédération Générale du Travail) representative at the Flandres de Dunkerque refinery: “We received thousands of euros from workers in small businesses, teachers, people working in the theatre, people working in the Lille Regional offices, who spontaneously sent us money saying: ‘If I go on strike it won’t change a thing. But you lot, you can’t fail!”

In the middle of October 60% of those surveyed responded favourably to a “radicalisation” of the movement. This figure took away from the government any possibility of claiming to act in the name of a so-called “silent majority.” The mass of the population knew full well that the reform was a socially regressive measure seriously against their interests.

The destruction of pensions affects practically everyone, except the rich. But beyond the question of pensions this movement revealed a deep discontent within French society. All the anger accumulated over the course of the last years has started to come to the surface. Yes, the law was passed. But the right will pay for this “victory” with the reinforcement of the feeling of injustice that burns in the hearts of millions of people, and adds to the combustible material in the foundations of the capitalist system. Sooner or later, this material will explode. For the moment, the union militants, students, school students, the activists in the Communist Party and other political formations involved in this struggle are going to reflect on its lessons.

The Power of the Working Class

The first of these lessons is the vast potential power of the working class. We insist on this point because it is of absolutely crucial importance in the fight against capitalism. The strike in the refineries and fuel depots provided solid proof of this power. When you think that workers in only one sector of the economy, if they stay on strike, can bring the capitalist economy to its knees, you realise the huge power that is concentrated in the hands of the workers in this country, as in all countries of the industrialised world. Nothing happens without their consent.

Employees form part of the “means of production” which the capitalists own and from which they make their fortunes. Man and machine form an inseparable whole, a unified mechanism, so to speak. However, despite their best efforts, the capitalists have not succeeded in reducing workers to the rank of simple automatons. The workers’ position gives them the power to suspend, partially or totally, the functioning of the infernal machine of capitalist exploitation, by way of a strike. Despite all the learned theories about the supposed disappearance of the working class, the fact is that because of the increased sophistication of the techniques of production and exchange, which create a greater interdependence between the different branches of the economy, the workers have never had so much power concentrated in their hands. The problem is that they are not aware of it, for the most part. Helping the workers become aware of this power - that constitutes the key to their future emancipation - is one of the most important tasks that the labour and communist movement must take upon itself in the months and years to come.

Like the big strike in 1995 or the struggle against the CPE, this struggle has created a new generation of militants. At the same time the “old-timers,” sometimes disheartened by so much deception and defeat, are revived and emboldened. Hundreds of thousands of workers and youth participated in militant action for the first time in their lives. This struggle will leave its mark on the workers' movement. However, it still resulted in a defeat. We must try to understand the reasons why.

The role of leadership

The government was frightened by the growth of power of the movement. Certainly, in the first instance, the perspective of a series of “days of action” did not worry them. They counted on these 24-hour mobilisations gradually running out of steam. They were pleased with the “moderation” and “responsible” attitude of the union leadership. But with the strikes in the ports and refineries, with what happened in Marseilles, in Le Havre, with the increase of “spontaneous” actions, of blockades, of indefinite strikes, and eventually the perspective of a massive movement into action by the youth, the government started to seriously become worried. From then on the whole of the government, media and repressive machinery was put into motion.

Disinformation, the forced breaking up of blockades by the police, the use of agents provocateurs, the repression of demonstrators and school students, the “preventative” closure of universities by the police (for example at the Sorbonne on 26th October): all this showed that we faced an implacable adversary, armed with a well thought-out, centralised and concerted strategy, and using every method at its disposal in order to achieve its ends. In contrast, on our side the fight had a disparate character. Different detachments of those opposed to the reform advanced in a disorganised fashion. We lacked a co-ordinated, collective strategy for the struggle. This situation can be explained in the most part by the behaviour of the union leadership.

From the start the aims and tactics envisaged by the union leadership were very limited. By means of 24-hour mobilisations they endeavoured to convince the government into opening negotiations. This position amounted to tacitly accepting, in principle, that our pensions would deteriorate, since it is clear that any “negotiation” with Sarkozy could not have led to any improvement in our pensions. Besides, this stance left the government the possibility of putting an end to the movement by simply refusing to negotiate. The government’s strategy consisted of letting the successive days of mobilisation go ahead, introducing some minor modifications prepared in advance, and then adopting the basic essentials of the reform. At no moment did the leaderships of FO (Force Ouvrière), the CFDT (Confédération Française Démocratique du Travail), and even the CGT encourage the indefinite strike movements. And they did nothing to push the generalisation of the indefinite strikes that developed after 12th October.

Thibault [leader of the CGT] limited himself to the idea that extension of strikes had to be “decided from the bottom,” which is obvious since you cannot get workers to go on strike without their permission. This stance amounted to abdicating all responsibility for leading the struggle, with the calling of days of action that, on their own, were not enough and could not inflict a defeat on Sarkozy. They said to workers “go on strike if you want, when you want, it’s for you to deal with,” without any attempt to reinforce, generalise, and co-ordinate the strikes taking place in order to maximise their impact and improve the chances of winning the battle. This amounts to leaving different sectors on strike to manage for themselves and, finally this assisted in their isolation and defeat.

As for Chérèque [leader of the CFDT], he actively looked to limit the duration and scope of the movement. He approved of the forcible opening by the police of striking refineries and fuel depots. Immediately the return to work began in the refineries, on the railways, and among the refuse workers. He held hands with the government and MEDEF [French employers' association], proposing to them negotiations on “the employment of young people and the elderly,” finally offering to “turn the page” on the pension reform dispute. These negotiations, of course, came to nothing, or at least nothing positive. For workers organised in the CFDT the lessons of this struggle are clear: if they want their leaders to be anything else but a “fifth column” in the labour movement for the bosses and the government, then they have to get rid of Chérèque and co. The problem poses itself in the same terms in the FO, only with Mailly and company instead of Chérèque.

The battle against the pension reform was lost, but this is not just any battle. In drawing the lessons from our defeats, we prepare ourselves for future victories. However, the reality of the capitalist system is that these victories can only be temporary, as long as the banks and the principle levers of the economy remain the property of the capitalists. If the pension reform had been repelled this time it would have been made the order of the day for a later date. The capitalist system is, from now on, not only incapable of progress, but even of guaranteeing the gains of the past.

By seeing their rights and their benefits scorned and destroyed, by seeing their living conditions get worse month after month, year after year, the workers will come to the conclusion that partial and sporadic struggles will not be enough, neither will changes in government that don’t change a thing about the system that oppresses them. They will come to the conclusion that there is no other solution other than the overthrow of the established order, that is to say their complete emancipation from the straitjacket of capitalism.