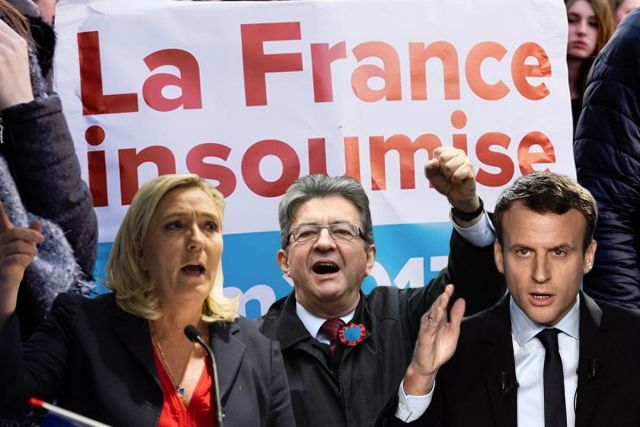 After months of turbulent campaigning, the drama of the first round of the French presidential election has come to a close, with Emmanuel Macron and Marine Le Pen left to face each other for the second round.

The outcome of these elections are unprecedented in recent history. For the first time since the creation of the Fifth Republic in 1958, indeed since the end of the Second World War, neither of the mainstream Socialist or Republican parties have made it through to the final round. This breakup of the old order is a direct result of the crisis of capitalism, which is producing instability everywhere, as parties and programmes are put to the test as never before.

In France, as everywhere else, the bill for the crisis has been presented to the working class and youth – first by the Republican Party under Sarkozy and, more recently, by the so-called “Socialists”.

The “Socialist” Party under François Hollande won a landslide victory in 2012 on a promise to reverse the austerity of the Republicans. However, once in power they did the opposite – carrying out massive attacks on the workers and youth in the interests of the richest in society – the capitalists and bankers.

Through this betrayal, the “Socialists” dug their own grave. Becoming the most unpopular president in modern French history, Hollande declined to even stand for re-election. However, this was not enough to save the party, which is now so discredited that their candidate, Benoȋt Hamon, scraped only a miserable 6.4% of the vote.

François Fillion, the favourite candidate of the right-wing Republicans, failed also to make the second round. In normal times, this would have been his election to lose. However, having based his campaign on restoring “high ethical standards” to French politics, his breath-taking hypocrisy was revealed when he was placed under formal investigation following allegations he had embezzled €880,000 by employing his family in fake parliamentary jobs.

What’s more, his austerity programme of cutting 500,000 jobs and €100bn from public spending, as well as ending the 35-hour working week, raising the retirement age, and scrapping nearly all of the labour code - although necessary from the point of view of the capitalists – was hardly going to inspire millions of workers.

With both the “Socialists” and Republicans in crisis, all attention fell on candidates outside of the traditional parties. On the right, the racist Front National (FN), led by Marine Le Pen, campaigned on a nationalist and xenophobic programme of “France for the French” – promising to close France’s borders, seek an exit from the EU, and give preference to French workers with regards to jobs, welfare, and housing.

However, despite the fascist roots of the FN, Le Pen’s victory in the first round (receiving 21.5% of the vote) does not indicate a move by the French to fascism, but a desperate attempt by a layer of the downtrodden to find a way out of the crisis.

The FN’s nationalist poison was able to gain an echo amongst a layer of French workers, particularly in the northern “rust-belt” areas, precisely because of the attacks of the bosses and the betrayal of the reformists of the Socialist Party in accepting them. The failure of the ruling “Socialists” to alleviate any of these problems has led a layer to turn to nationalism in despair.

Cutting across this from the left, however, was Jean-Luc Mélenchon and his “Rebellious France” movement, which fought a bold, militant campaign attacking the rich. Beginning as a complete outsider, his programme terrified the establishment by gaining massive support amongst a layer of workers and youth, resulting in him coming just 1.9% shy of beating Le Pen to reach the final round.

Although the ruling class were jubilant that their man Macron, the former Rothschild banker, came top in the first round, it is by no means certain that he will win the presidency. His pro-business programme of €60bn spending cuts and job losses could lead to high levels of abstention, as many workers will be disgusted by both him and Le Pen. Already protests have been seen in Paris against the “choice” facing French workers and youth of Le Pen or Macron.

The task now for the French Left is to strengthen the Rebellious France movement, in order to fight whoever wins the presidency on the 7th May. Neither the liberal Macron nor the racist Le Pen offer any future for French workers. Instead, the only way out of the crisis of capitalism is to build a mass movement of workers and youth, armed with a socialist programme to take power from the bosses and billionaires.