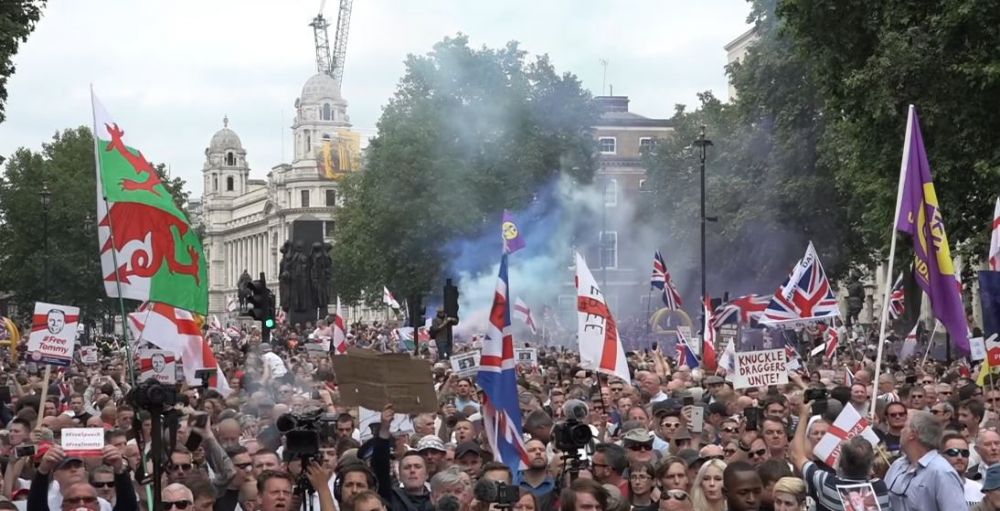 In May, far-right former leader of the English Defence League (EDL), Tommy Robinson, was jailed for 13 months for contempt of court. The sentence followed his filming and revealing details of a child grooming trial at Leeds Crown Court. The stunt was clearly aimed at getting himself arrested and turning himself into a martyr for “free speech”, victimised by a “politically correct establishment” protecting “Muslim grooming gangs”.

By all accounts it seems to have worked. Within days more than 500,000 people signed a petition for his release. Over the coming weeks protests were staged, culminating in a far-right mobilisation of 15,000 outside Downing Street last weekend, on 9 June. By contrast, the counter-mobilisation numbered a few hundred at most.

Parallel to this we’ve seen details emerge of the trial of a National Action terrorist cell, who intended to follow the example of Thomas Mair and murder another Labour MP on Britain’s streets.

This should serve as a loud wake-up call for anti-racists and anti-fascists, and particularly the trade union leaders whose dereliction of duty allowed the far-right to mobilise on the streets unopposed.

The size of the 9 June mobilisation made it by far the biggest far-right gathering in recent years.

There are a number of factors which led to this exceptional turnout. In the first place, the conviction of Tommy Robinson (real name, Stephen Yaxley-Lennon) provided a rare focal point for various groups to rally around.

Furthermore, it is clear that every effort was put into this mobilisation. Everyone – from Robinson’s Generation Identity group, to Katie Hopkins, to UKIP, to racist Dutch politician Geert Wilders – was involved.

The backing of UKIP is particularly significant. Since the 2016 Brexit vote UKIP has been wandering aimlessly. With the wind in the sails of the rabidly reactionary Brexiteers of the Tory Party, the latter have hoovered up a lot of UKIP’s support. UKIP has therefore suffered an existential crisis.

The support for Robinson offered by UKIP’s new leader, Gerard Batten, indicates that UKIP is making the only logical pitch that can keep it relevant: to the far right. This is beyond the pale even for former leader, Nigel Farage. Whereas UKIP previously had safeguards in place against EDL ‘entryists’, at the 9 June protest Batten directly appealed for those assembled to join the party.

Xenophobic bile and racial hatred have been deliberately nurtured over the course of years by the ruling class and its representatives. Daily the tabloid press scapegoats “illegals”, “sponging immigrants”, etc. for the crumbling state of the NHS, for the rise of crime, for the state of housing etc. 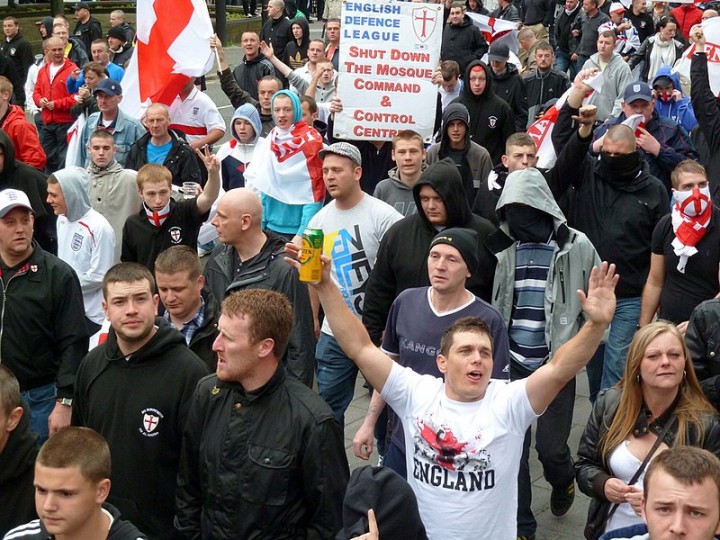 Xenophobic bile and racial hatred have been deliberately nurtured over the course of years by the ruling class and its representatives / Image: Flickr, Lionheart Photography

It hasn’t just been the Brexiteer wing of the Tories who have whipped up this muck. The “hostile environment” policy was conceived by Theresa May when she was Home Secretary in Cameron’s government.

And let us not forget that the Blairites have played their part in this vile game too. Yet they have the brass neck to call Corbyn an anti-semite. Who can forget Ed Miliband’s “controls on immigration” mug? Or the now notorious article written by Sarah Champion MP for The Sun declaring: “Britain has a problem with British Pakistani men raping and exploiting white girls”?

What has Tommy Robinson and his ilk done other than take this poison to its logical conclusion?

These poisonous seeds have found fertile soil in the left-behind housing estates and devastated ex-industrial towns. For years, no one has offered a way out for the depression and alienation gripping working class communities.

The Blairite wing of the Labour Party and right-wing trade union leaders above all bear responsibility for accepting this “managed decline” dictated by the market.

With no solution coming from the left, the answers of the right – that Muslims and immigrants are to blame – were the only ones on offer. Racists have since taken the Brexit vote as a vindication of their bigotry.

Tommy Robinson has deliberately cultivated an image of a normal working class man, unlike the polished hypocrites of parliament. Furthermore the right wing are not afraid to mobilise on the streets and to denounce in the fiercest terms the “establishment”. Part of their appeal is the manner in which they paint themselves as a fighting alternative.

Haughtily dismissing Robinson therefore as a common criminal, as a fraudster who is in contempt of court, as many have done, clearly isn’t going to cut any ice. Hundreds of thousands of people see him as standing up for “free speech” against an establishment, a media, and politicians of which they are distrustful. Pointing to his less-than-polished image only does Robinson a favour.

The left needs to offer political answers to the problem. We need to be absolutely clear that it is not Muslims who are responsible for the ills of society, but capitalism. Capitalism has failed, is destroying communities, and must be overthrown. Only a militant, socialist programme which breaks with this system can offer an alternative.

Is this a new rise of fascism?

The size of the 9 June mobilisation has naturally come as a shock to many. Some have even gone as far as to talk about the ascendancy of fascism in Britain.

That the far right will be emboldened by the lack of opposition, and that this will spur on further racist attacks is undoubtedly true. That there were organised fascists among those present on 9 June is also true.

We must maintain a sense of proportion, however. The Socialist Workers Party (SWP), whose front organisations – Stand Up To Racism (STUR) and Unite Against Fascism (UAF) played a key role in the counter-mobilisation – has been particularly vocal about the imminent threat of fascism. Their analysis of 9 June speaks of “a lethal fascist street movement” developing. 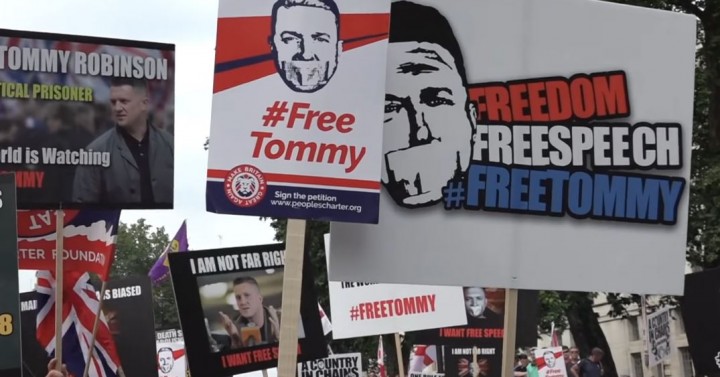 The size of the 9 June demo was exceptional, but we must maintain a sense of proportion / Image: fair use

Indeed, the SWP has claimed for years that the threat of fascism lies just around the corner. But to repeat that we are threatened with fascism year in, year out is worse than useless. Like the boy who cried wolf, constant warnings about “fascism” can only disarm workers and youth when a real fascist threat emerges.

Are we seeing a new rise of fascism?

All serious fascist movements in history have been marshalled by the capitalist class to completely crush the organised labour movement. They acquire a mass base in the middle class and declassed layers, ruined by capitalism. They are used as a last throw of the dice when the system is threatened with socialist revolution. Clearly this is not the case today.

Where violent fascist groups have tried to organise, as was the case with National Action, they have enjoyed derisory levels of support and have quickly been crushed by the state.

This does not mean that the state can be relied upon to defeat this threat. Rather, it demonstrates that the capitalist class does not have any interest in unleashing fascist gangs on the working class at this point.

In Greece, where we have seen the organisation of a real fascist party in the form of the Golden Dawn, the ruling class have reeled them in because their violent assaults against workers and left-wingers threatened to provoke a massive backlash.

How to fight the right

We might not be on the cusp of the rise of fascism, but in no way can we downplay the very real threat posed by the far-right, particularly to immigrants and ethnic minority communities.

The poisonous atmosphere created by the rotten policies of the capitalist class will continue to fuel racism, and breed new would-be-killers (like Thomas Mair) and National Action-like fascist cells. When the far right raises its ugly head it should therefore be beaten down. The question is: how?

Only mass mobilisation on the streets, linked to a fight for clear socialist policies, can draw out the infection of racial hatred and scapegoating and smash the far-right for good.

This could have been possible in advance of Saturday’s demonstration. No less than seven trade union general secretaries (from Unite, NEU, PCS, CWU, TSSA, ASLEF and BFAWU) and two Labour MPs signed the Stand Up To Racism statement supporting the counter-mobilisation. Momentum in particular, which has styled itself as a campaigning organisation, should have mobilised to clear these bigots off the street.

That only 150 people were mobilised is a disgrace, for which the leaders of the labour movement bear full responsibility. On account of the small numbers at the counter-mobilisation, people were placed in real danger, something which should never have happened.

Although 15,000 thugs is a serious force when unopposed, this pales in comparison to the numbers that the trade unions have been capable of repeatedly mobilising through the capital in recent years. This shows the real balance of forces – where the union leaders are prepared to mobilise them.

The organised working class can easily land a blow against the far right with one or two serious mobilisations.

The whole history of the struggle against racist and fascist groups illustrates this point. This was the case with the National Front, who were beaten in Lewisham in the 1970s; the same was true of the EDL in recent years.

In the USA also, after the Charlottesville ‘Unite the Right’ rally last summer, it was mass mobilisations across the country that forced the neo-Nazis and alt-right back into hiding.

Above all, it is the responsibility of the trade union and Labour Party leaders to mobilise workers and youth to stop the right wing from marching.