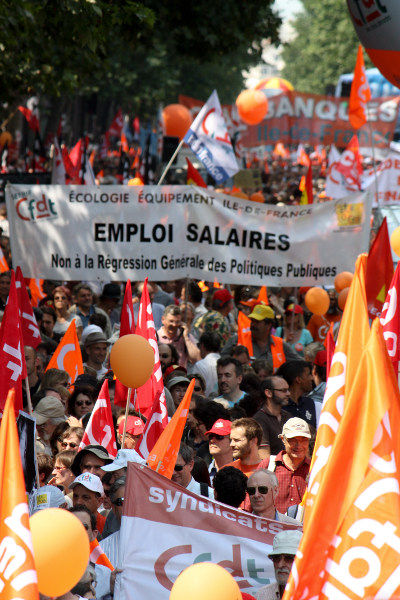 Last week in France around two million workers came out onto the streets to express their anger at the latest government attacks on pensions. The union leaders hope to hold the movement at this level, i.e. of formal protest but no strike movement. But the workers are looking for more than this, as the growing discontent in the ranks of the labour movement clearly indicates.

On June 24th, an estimated 2 million workers marched in anger against the latest attacks against pensions by the Sarkozy government. The legal age for retirement, reduced to 60 years old by Mitterrand in 1981, is to be raised to 62. Considering that this demonstration was called for the last week of June, a low turnout might have been expected. But this was not the case. In Paris, some 150,000 workers took to the streets. A further national day of action has been called for September 7th.

However, demonstrations – however impressive they may be – will not prevent this latest attack on workers’ pensions. The previous “reforms” concerning pensions over recent years also provoked massive demonstrations. They were carried out nonetheless. The leaders of the big trade union confederations consciously and cynically use such demonstrations in order to give the impression that they are doing something to counter government policy. But the calling of demonstrations is in fact a lame substitute for the preparation of a real struggle. The most conscious layer of the working class has become acutely aware of this, which explains the rising tide of discontent within the CGT. The mass of the workers, outside of the unions, feel instinctively that these methods will not achieve anything. 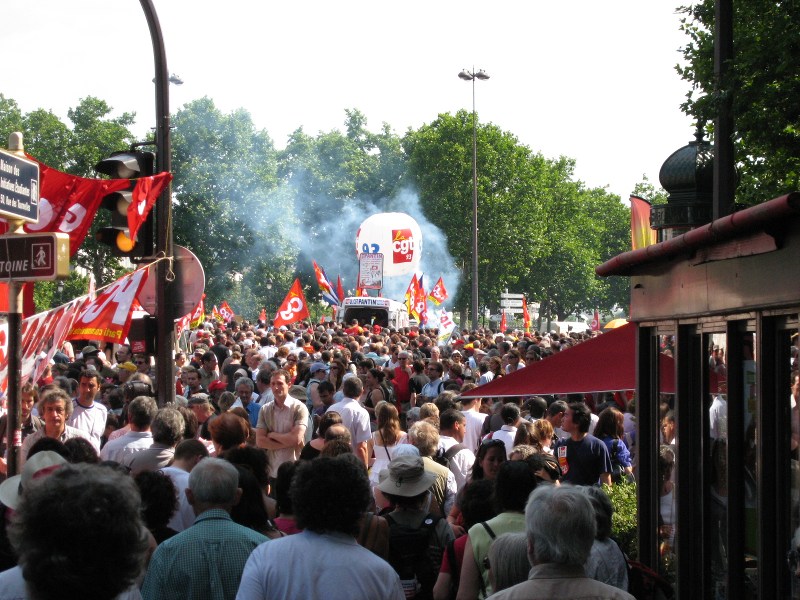 The extremely grave situation in which the workers find themselves cannot be resolved by formal protests and parades. Bernard Thibault, the leader of the CGT, complains of the “timetable” for the reforms. He wants more time for “consultations”. The superficial proposals put forward by the leaders of the Socialist Party and the Communist Party offer no solution. The Socialist Party leaders denounce Sarkozy, but confine themselves to demanding that the sacrifices imposed on workers should be accompanied by a modest contribution from the rich. The Communist Party leadership vaguely appeals for a change in the criteria for state funding of capitalist industries. They say, for instance, that bonuses should be paid to capitalists who invest or create jobs. On the political front as on the trade union front, the French working class thus finds itself disarmed and paralysed by the short-sighted and compromising spirit of its leaders, in the face of the most savage attack on their living standards since the time of the Great Depression of the 1930’s. 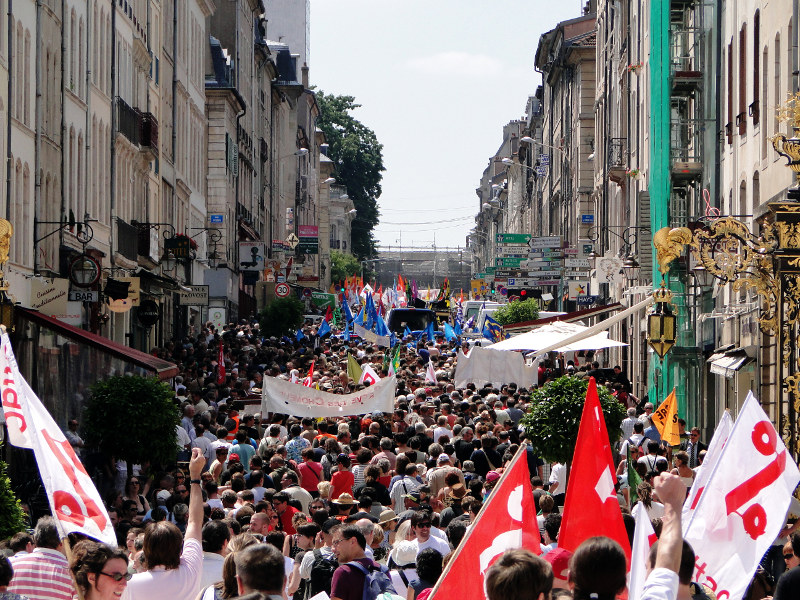 Sarkozy – surely the most stupid and arrogant head of state in the entire history of the country – is now strutting around, berating his ministries for their extravagant budgets. He even cancelled the annual garden party at the Elysée Palace. Everybody must tighten their belts! He has nonetheless ordered a luxurious airliner for his personal use, at a cost of 180 million euros. He could not bear the thought of being outdone by the “Air Force One” used by US presidents. He more than doubled his own wage when he came into office, and has earned a solid reputation for spending colossal amounts of public money on every kind of pomp and glitzy extravagance. In the present economic context, this provocative behaviour is not a detail. The entire edifice of “Sarkozism”, with its entourage of corrupt ministers and flunkies, stands as a towering monument to social inequality and the revolting and wasteful opulence of the rich. 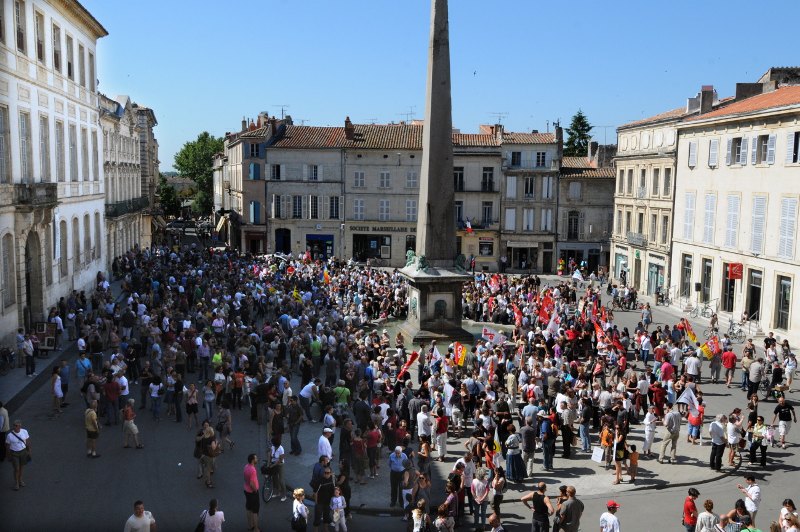 While massive handouts have been given to the banks and to big business, all the past conquests of the workers’ movement are under attack. The massive and rising state deficit (83% of GDP) is leading France along the same path as that which led to the collapse in Greece. By applying draconian cuts in education, health, pensions, social security, and public services, the government is attempting to recover the money handed out to the capitalists.

This cannot and will not go on for ever. The reformists at the head of the workers’ movement act as a brake on the consciousness and upon the action of the workers. But sooner or later, a strike movement from below will take place. The more this is delayed, the more powerful it will be when it finally happens. Tremendous tensions are building up at all levels of society. The number of people living below the “poverty line” increased from 6 million to 8 million between 2004 and 2009. Those figures correspond to the period before the onset of the social consequences of the economic crisis. Now they are increasing sharply. Unemployment is rising. Investment has fallen sharply, as is consumer spending. Factories and workplaces of all kinds are closing down or leaving the country on an unprecedented scale. The government and the capitalist class are sitting on a volcano, which may well erupt sooner than most people think. The most serious representatives of the capitalists understand this. When Sarkozy’s right-wing rival, former Prime Minister Dominique de Villepin, warned of the danger of “social revolution” in France, he was only expressing, from the opposite class point of view, the perspective which the Marxists in the Communist Party have explained. Growing numbers of communists and trade unionists are convinced of the need for fundamental revolutionary change, and for a programme giving full expression to this need. 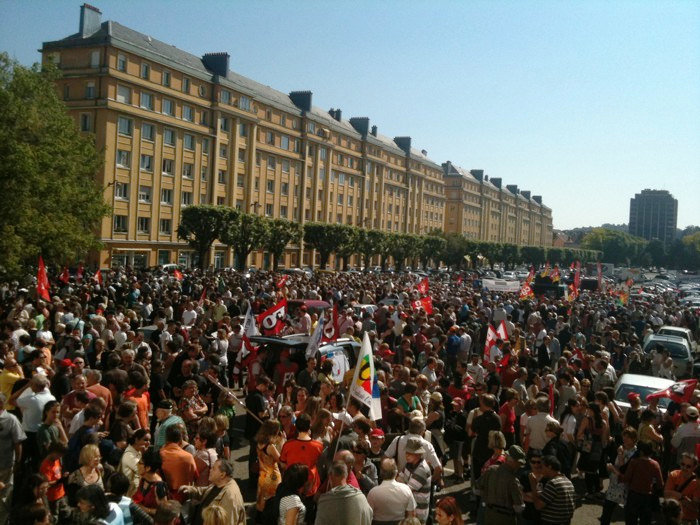