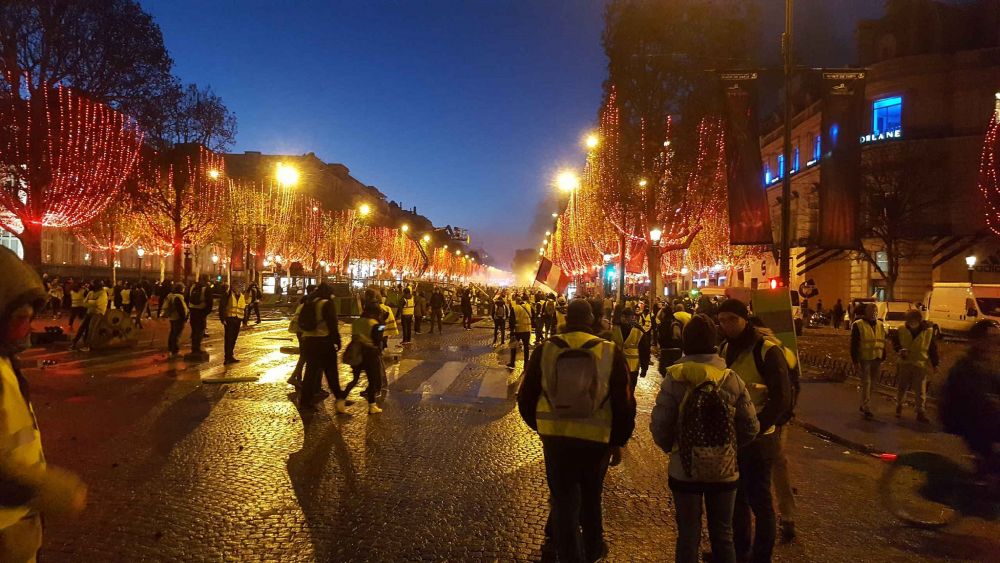 In France, hundreds of thousands of people have participated since mid-November in the yellow vests movement to protest against the rise in fuel taxes and, in general, against the ever-increasing cost of living. This movement is the inevitable result of a palpable economic crisis, and the brutal austerity imposed by the current government.

Between cuts to social services, tax increases and other austerity measures, the yellow vests testify to the suffocation of the French population given stagnant wages and the continual rise of living costs.

On Réunion Island, the French overseas department, the movement of the yellow vests is especially large and radical, so much so that the government has imposed a curfew. Since the beginning of the movement, the island has been completely blocked; the roads and the harbour are barred, the schools and administrations are closed; the hospitals have been slowed down; and while some businesses are open in the morning, many have been closed altogether.

Strong bonds of solidarity have been established among the demonstrators. Barricades are regularly maintained and protected and the movement is supported by a good part of the population. Thanks to social networking services, the protesters are able to assemble quickly and their roadblocks are very mobile.

This is the greatest crisis that the island has experienced since the 1990s. So far, the demands of the movement are numerous, and no clear direction has yet been established. Réunionese are waiting for recognition of their grievances by the government, but for now, the state has only responded by sending in the police. 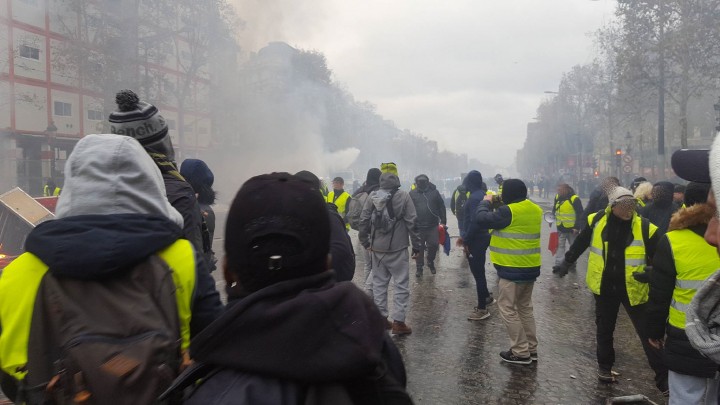 The yellow vests must put on their agenda the overthrow of Macron's government / Image: Flickr, Erder Wanderer

The fact that the yellow vests movement has found a greater echo among Réunion workers is not surprising. For several years now, the inhabitants of Réunion Island, although French, suffer much more acutely than their compatriots on the mainland. In Réunion, everything is 30 to 50 percent more expensive, partly because all products are imported. This is not to mention the fact that 40 percent of the population lives below the poverty line and one-third of the working population is unemployed. For the youth, the unemployment rate is 56 percent. The Réunionese have the understandable impression that they are second-class citizens. Their island is mainly governed by metropolitans from the mainland, while the Réunionese themselves face mass unemployment. More than anything, they feel abandoned by the government. The fuel tax hike was a spark that ignited a long-simmering crisis.

In response to the movement, the Minister of Overseas France, Annick Girardin, visited the island on 28 November. She promised that the price of fuel would drop immediately and talked about making "other announcements" regarding the cost of living. The yellow vests promised the minister a big welcome. They swore that 300 barricades would be erected, saying "No cars will pass". An appeal was launched on social networks to show this to the minister.

Given the power of the Réunion movement, the Macron government may be forced to make concessions. But it will soon resume its offensive against the workers and the poor, and the Réunionese, already some of the most affected by the crisis of capitalism, will be among the first victims.

The actions of the yellow vests in Réunion shows the way to follow for their comrades in mainland France. The whole movement must now put on its agenda the demand for the overthrow of the Macron government. This will only succeed if the movement on the mainland is as powerful as that on Réunion.

Macron gave a speech at the Elysée on Tuesday morning that was one, long provocation. The yellow vest protestors are demanding, at a minimum, immediate measures against the high cost of living today. However, the president mainly talked about the situation that will face the world by 2050. Despite speaking of the need for the government to “change [its] method”, not a single concrete measure was announced. His promise to review gas taxes every three months was nothing but a vague proposal, offered without explanation or a timescale.

In terms of immediate measures, he promised "consultations" that will be organised in the coming months. Of course, nothing positive can come from these, but that is not the goal. The hope was that by merely announcing consultations, the government could demobilise the yellow vests. Macron was saying: “why bother mobilising, when we’ve already promised to talk?”

However, there is too much anger and exasperation in French society for this movement to be content with vague promises, delivered in a patronising tone. The fight will continue on Saturday, with an important step forward: the simultaneous mobilisation in the streets of the yellow vests and the CGT (among others). In several cities, joint demonstrations and marches have been announced. Ideally, this should be the case everywhere, under common slogans: against the taxation of the poor, against austerity policies, and so on.

The role of the unions

Why is the government not giving in? Because Macron fears, quite rightly, that any concession will encourage the struggle of the masses, which will lead workers to say to themselves: "to get something, you have to act like the yellow vests!” But on the other hand, by refusing to give any ground, the government runs the risk of enraging and radicalising the movement.

Experience shows that a government is confronted with this conundrum when the exasperation of the masses and their fighting spirit have reached such a fever pitch that they are on the threshold of a powerful social explosion. Certainly, no one can say if this explosion – or rather, a second explosion (the yellow vest movement is already explosive) – will actually take place. But the conditions are ripe. And now, the ball is in the camp of the labour movement: the unions first, but also parties of the left. They must intervene in this movement, support it and, above all, rely on its momentum to build a general offensive against the Macron government.

Left to itself, the yellow vests may run out of energy and disperse in the long run. The government will probably not yield to the strategy of blockading roads, businesses and institutions. The government will "unblock" them, one by one, and will count on the movement to become fatigued. This is why the movement must increase in strength, and cross a decisive threshold. The strategy of blockages must transform into a vast movement of strikes. This is the route to victory. But in the immediate future, the yellow vests cannot organise these strikes themselves. This is the role, first and foremost, of the workers’ organisations. They must throw all their strength into this battle – not in three months, but now.

Instead, union leaders have distanced themselves from the yellow vests and even attacked them (Laurent Berger, CFDT, has been the most virulent). Fortunately, the unions’ rank and file have reacted differently, especially in the CGT, where the position of the leadership is highly contested from below. And for good reason: it is scandalous. Philippe Martinez (general secretary of the CGT) initially refused to support the yellow vests’ action on 17 November, under the pretext of refusing "to march with the National Front" (whose organised presence was marginal). Then, he called for union members not to participate in the demonstrations of 24 November. Instead, the CGT called for demonstrations on 1 December. Finally, he still does not clearly support the cancellation of fuel tax increases. Instead, he prefers to ask for a salary increase – as if these two demands were contradictory!

While Martinez piled up excuses to stay away from yellow vests, the CGT's rank-and-file activists intervened in the movement, or at least expressed their support. Such examples of solidarity must increase. Wherever possible, the CGT activists must advise the yellow vests to organise general assemblies, where the question of strikes can be raised. The movement of the yellow vests can play an important role in organising a large movement of strikes. It will not be difficult to connect the two, because many yellow vests are workers. If they are won over to this strategy, they will become excellent advocates for this cause in their workplaces. It is necessary to rely on the extraordinary combativity this movement has aroused.

General assemblies will also make the movement more democratic and more effective. The designation of eight spokespersons (by what mechanism and by whom, it is unclear) has put this issue at the centre of discussions. Democratic control of the grassroots movement is needed, with elected and recallable delegates at the local and then the national level. This would also displace the extreme, right-wing activists who seek to thrive on the current confusion. A clear, anti-capitalist stance will be much more appealing to the majority of yellow vests than the nationalist demagogy of the far right.

Some will say, "No! The movement of yellow vests is apolitical and must remain so.” The same people often object to the involvement of the unions. We must not give in to this call, which always favours the most right-wing elements. The yellow vests reject the current political system (rightly so), and are wary of both political and union leaders (again, rightly so). But their movement is not at all "apolitical". Some of their emerging demands – such as the dissolution of the National Assembly – are not only highly political but also very radical. And they need to find a clear expression in the left and the trade union movement. 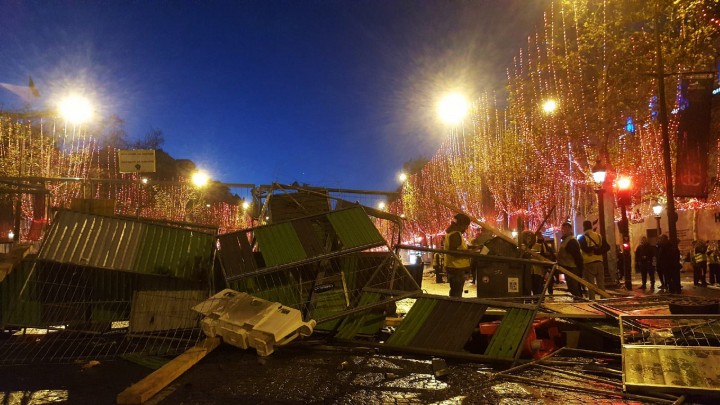 Despite some claims, the movement is not at all "apolitical", some of its demands are not only political but also very radical. And they need to find a clear expression in the left and the trade unions / Image: Flickr, Erder Wanderer

The CGT and France Insoumise, in particular, must explain that we will not be able to overthrow the government without a strong movement of renewable strikes, because blockages and demonstrations will not be enough. At the same time, they must present a programme of breaking with the capitalist system, whose crisis is the fundamental cause of the high cost of living and all the masses’ suffering. Not to intervene politically in this movement would be to abandon the terrain to the right and the extreme right. We must not allow this.