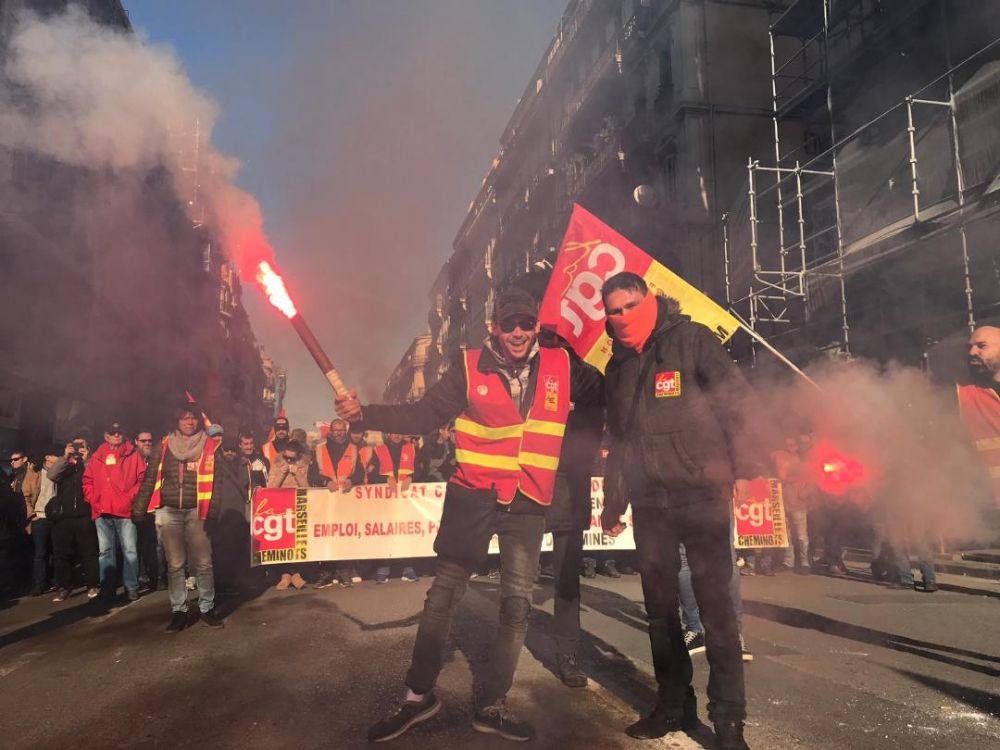 The speech delivered by Edouard Philippe (the Prime Minister) yesterday concluded over 18 months of “talks” and “consultations” with the leaders of the trade unions. Hundreds of hours of negotiation meetings culminated in this enlightening result: the government presented exactly the same reform that they would have put forward if none of the “talks” and “consultations” had taken place.

For 18 months, the trade union leaders have been playing the role assigned to them by the government, in this circus of so-called social democracy. Their task has been to deceive the people, to convince the workers that the government is listening to them and taking their concerns into account, in order to reach a compromise. Instead of boycotting these negotiations and turning towards the workers to prepare for a massive struggle, the trade union leaders have played along with the circus. Philippe Martinez (the General Secretary of the CGT) has now declared that “the government has ridiculed the people”. But it is above all Martinez himself who is being ridiculed: after 23 consultation meetings, the government is accusing him of “not wanting to talk”. But who is to blame? The government, for organising this farce and defending the interests of the ruling class? Or the head of the CGT, for accepting to be complicit in it?

Yesterday, Edouard Philippe delivered a very clear message: the government is determined not to make any concessions. Behind the polite words, his aim was to demoralise the other side, to convince the striking workers that their efforts and sacrifices have been in vain, that they had better give up quickly. Of course, there is an element of bluster in Philippe’s attitude. In December 1995, Alain Juppé made a similar show of firmness and bravado, just a few days before capitulating.

However, this doesn’t mean we should underestimate the government’s determination. What’s at stake for Macron is his political credibility, especially with the more reactionary layers of the electorate, whom he is courting with an eye on the 2022 elections. Most importantly, however, this pensions reform is a major issue for the big French bosses. On top of enabling budgetary savings on the back of the working class, it is meant to develop the (potentially huge) private pensions market. The hardened resolve of the ruling class and of the government who serves them reflects the magnitude of these objectives.

Hence, Macron will only back down if the wave of indefinite strikes is continuously being extended to more sectors of the economy; that is to say, only if the government starts to fear that the mass struggle could become uncontrollable and orientate itself towards an unlimited general strike – in other words, towards a revolutionary crisis. This is the perspective that the trade union leaders and the left-wing parties should be explaining to the youth and the workers. And yet it is exactly what they are not saying. This is extremely damaging to the movement, because the workers – whether they are currently on strike or not – need to know where the movement is going and what the conditions of victory are.

Our side needs clear perspectives and a concrete plan to mobilise. Instead of this, we have vague calls to “carry on with and strengthen the strike, including indefinite striking wherever the workers have decided” (from the CGT, 11 Dec). Instead of explaining the needed level of mobilisation and creating a concrete plan to get to that level, the trade union leaders have unaffectedly decided to leave it up to the workers… who will without a doubt note the indecisiveness and passivity of their own leaders.

The other major weakness of the leadership is the programme they are putting forward, or rather, the lack thereof. The leaders of the trade unions that have been mobilised since 5 December, just like the leaders of the left-wing parties, are limiting the objectives of the movement to the scrapping of the pensions reform. This is a serious mistake and a major obstacle to the expansion of the indefinite strikes. Workers do not embark on indefinite strikes lightly: they are aware of the sacrifices and grave risks they pose (loss of wages, workplace sanctions, etc.). They will only come out on strike if they feel that what’s at stake is worth taking the risk. But the government has taken care to spare the oldest workers who are nearing retirement (for now, anyway). And when it comes to the youngest workers, they are hesitant to mobilise against an attack the effects of which they won’t feel immediately, given that they have so many other burning and immediate problems. Additionally, many workers believe that, even if they succeed in defeating this heinous reform tomorrow, a new, equally reactionary government will simply try to implement it the day after.

In the context of a deep crisis of capitalism and generalised social decline, workers understand that fighting against this or that reform will not be enough to solve their problems. In order for new layers to join the struggle, the movement has to arm itself with a programme that goes on the offensive and, rather than simply defending past gains, demands a rapid and significant increase in the standards of living of the entire working class. This would include wage increases, investment in public services, mass hiring of public sector workers, scrapping of the Lois travail, construction of social housing on a mass scale – and, naturally, scrapping the pensions reform and implementing pension increases, as well as lowering the age of retirement.

Finally, since it is clear that Macron will never implement such a programme, overthrowing his government should top off the list of demands of the current movement. This government must be replaced by a government of the workers, one that will break the grip of the capitalist class on the economy.

We cannot claim that such a strategy and such a programme would definitely succeed. There is no way of knowing the mood of the masses except through the course of the struggle itself. But what is clear is that the strategy and “programme” of the trade union leaders (and left-wing parties) constitute a serious obstacle to the mobilisation of the masses in this strike. But time is ticking. The rail workers, the teachers and the refinery workers cannot hold the fort indefinitely. They will either be joined by other sectors rapidly and on a mass scale, or the government will win this struggle.