The year 2015 was marked by an unleashing of war and terrorism. Dozens of armed conflicts spread death and destruction in Africa, the Middle East and Asia. Millions of people have been killed wounded or forced into exile. On the borders of Europe, Ukraine has descended into a civil war that, according to the UN, has killed almost 10,000 people and injured more than 20,000. The list of countries affected by terrorism has continued to grow. The barbaric events in Paris could be repeated in London, Brussels or any other European city. 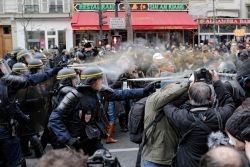 The great French media has remained silent over most of these conflicts. For example, it almost never mentions the war that the Erdogan government has declared on the Kurds and the militant left in Turkey, nor the bombing of Yemen by the Saudi army. This silence is not by chance nor the result of  indifference, it is deliberate and conspiratorial. Despite the growing differences between the Western imperialists and Saudi Arabia and Turkey, these criminals are still “allies”.

Information broadcast by the mainstream media is divided into falsehood and hypocrisy. According to the media, war and terrorism are clashes between systems of “values”.  When French bombers carry out strikes on Syria and Iraq, it is not bombs that fall from the sky, but “freedom, equality and brotherhood”. The first duty of the French labour movement is to refute this sickening propaganda – not forgetting, for example, the role of the French government not so long ago financing and arming the fundamentalists in Syria.

Ultimately, the epidemic of violence that is ravaging the planet is an expression of the agony of the capitalist system. It has completely exhausted its progressive potential but, unsurprisingly, refuses to die. The ruling classes have never given up their power and privileges without a fight, even if this means aggravating the suffering of the rest of humanity. Furthermore, the bourgeois class is convinced that only they are capable of leading society, despite the chaos they cause as a result. The counter-reforms and austerity measures will intensify everywhere.  Recession or not, this is the only possible policy from the point of view of the bourgeoisie.  Millions of young people, workers and pensioners will pay the price, starting with the most vulnerable.

However, the organic crisis of capitalism cannot be reduced to its economic dimension, even if it forms its basis. A sense of unease is developing on a large scale, including in the middle classes, in face of the dilemma of the moral putrefaction of the system. The political and economic “elite” are largely disconnected from the problems facing ordinary people. Used to the corrupt atmosphere of their small circles and free passes and privileges, they end up forgetting about the man in the street who makes his living honestly, but with more and more difficulty – and observe him with growing disgust.

The opulence of the very rich has reached unheard of levels that nothing can justify, if not the madness of a decadent system. In “Le Figaro”, December 30th, we learn that Jeff Bezos, Amazon’s boss, more than doubled his personal fortune in 2015. This mere mortal “weighed” in at $28.6bn at the end of 2014, and comes in at $59.3bn today. Taking, therefore, fourth place in the ranking of giant parasites behind Bill Gates ($83.6bn), Amancio Ortega ($73.2bn) and Warren Buffet ($62.5bn). Buffet lost $11.3bn in 2015, which is roughly the same as Nicaragua’s GDP. “Le Figaro” states: “this loss is not likely to upset his lifestyle” , which is no surprise. In the meantime, 2.8 billion people live on less than two dollars a day.

President Francois Hollande’s French government is entirely subjected to the interests of the big French parasites; the Bettencourt  family (€33.3 billion), Arnault (€32.2 billion), etc. However, because of the economic situation, these parasites have demanded drastic cuts in public spending, to trash the Labour Code and the destruction of public services – and tax relief for themselves. The socialist leaders, having sworn allegiance to capitalism, and to its laws and masters, have carried this out with enthusiasm.

Hollande has continued and deepened the policy of Sarkozy A deep political crisis has inevitably resulted, amplified during the regional elections held in December. Plummeting in popularity, the government has cynically taken advantage of the attacks of November 13th  to smother social unrest, by imposing a “state of emergency”, with the scandalous support of members of the PCF (French Communist Party). This state of emergency has not been directed at potential terrorists, whose actions it cannot prevent, but towards our own democratic rights, as we soon found out. The labour movement should demand that the state of emergency be immediately lifted – and fight for this to happen.

Hollande’s domestic and foreign policy has not decreased, but on the contrary, increased the probability of new attacks in France. Ultimately, the actions of bombing Syria and Iraq will fall into the hands of fundamentalists whatever the immediate military impact may be (and civilian casualties are inevitable). Furthermore, the political proposal for the “deprivation of French nationality” for terrorists has nothing to do with “protection of the French”. The real aim is to divert attention away from the real guilty party of the causes of poverty and the continued rise of unemployment in France. Once again, the National Front will profit from this.

A world that is struggling to be born

Terrorist attacks, regional elections and the actions of the French government have created a situation that has weighed heavily on the morale of many members of the militant left. But, at the end of it all, terrorism, the National Front and the bankruptcy of the socialist leadership are just symptons of a system in agony. Let’s not lose sight of a new society that is struggling to be born – a fair society, worthy of the people who make it up. It is the hope of this new world that is embodied in the political movements of Podemos in Spain or Jeremy Corbyn in Britain.

The same anger and hopes exist in France. They will eventually be expressed in a massive youth and labour movement – not in ten or twenty years, but before long. We must contribute to the rise of the opposition movement of the left, against the policies of austerity and the system that supports them. But we must also learn from the lessons of the failure of Syriza in Greece, which had disappointed the hopes of many, despite the support and enthusiasm of millions of Greeks.

Alexis Tsipiras refused to tackle big capitalist ownership. Therefore, he had to give up his programme following pressure from the Troika. The failure of this reformist policy rings like a warning to Jeremy Corbyn, the leaders of Podemos and the entire international labour movement. The birth of a new world and the building a new economy, free from injustice and oppression, will not happen without breaking away from the current system of private ownership of the banks and industry. We cannot overcome the policies of austerity, inequality and unemployment without overcoming capitalism itself. The new world will be socialist, in the Marxist sense of the term, or it will not comes to pass .