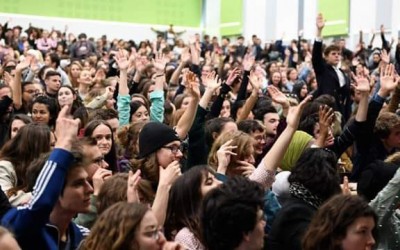 Following the motion (submitted by our comrades) that passed with strong majorities at student assemblies at l'université Paul-Valéry-Montpellier and Toulouse, another extremely radical resolution has been adopted by the Paris Nanterre University. It declares the university on strike, lays out a series of demands against Macron's educational counter-reforms, states its solidarity with the yellow vests, condemns police repression, calls for Macron's resignation and puts the word out for a delegate conference of representatives from Paris universities to discuss a coordinated political strategy.

Read the statement in French at Révolution |

In the last two weeks the movement of outrage against Macron has done nothing but grow. High school students are showing the way forward: tens of thousands have taken to the streets en masse. On university campuses there has been an explosion of General Assemblies, strikes and sit-ins. Last Saturday, workers with and without yellow vests were out demonstrating. We welcome this movement, as the government has been intensifying its attacks on workers and young people. Following changes to the university admissions system that would disadvantage working class students, Macron wants to impose an increase in tuition fees for non-EU international students!

Faced with this movement, Macron’s sole response was to use repression. The arrest of over 150 high school students in Mantes-la-Jolie, and the images of those hurt by the police, came as a shock to all of us. We condemn this week’s harsh and barbaric repression aimed at school students, workers and yellow vests. We demand that all judicial proceedings be abandoned. We refuse to fall into the trap of dividing up protesters between the “good” and the “bad”. This government is the main culprit for the current situation: it is the perpetrator of real, systemic violence and of the violent repression methods used by the police.

It is time to put an end to this cynical, arrogant and profoundly anti-working class government. Macron has never been so hated and rejected by the people.

The General Assembly of Nanterre calls on students to join the ongoing struggle alongside the Yellow Vests, workers, and school and university students who have mobilised to fight Macron’s anti-working class policies. It is no longer a question of fighting this or that individual attack on the working class, henceforth we must fight against the totality of government policy. This government is no longer legitimate. It is time for them to resign.

We, 2000 students of Nanterre University, gathered in a General Assembly on the 10th December 2018, call on all students to go on strike until our demands are met and to take to the streets on the 11th, 13th and 14th December. We call on you to join the General Assembly and vote to cancel lessons and postpone midterm exams in order to free up time to build for the mobilisation.

Likewise, we call on workers from all sectors to join us on strike. With this in mind, the trade union movement must put a 24-hour general strike on the agenda, as a starting point for a wide movement of unlimited strike action.

We cannot win on our own, but only through a general strike with the masses of workers, and school and university students!

In order to coordinate amongst ourselves and establish a mobilisation strategy, we call on all Universities in the Paris region to elect delegations to an Île-de-France Student Coordination meeting on Thursday 13th December at 5pm. We propose the following delegation numbers, to be elected through General Assemblies at each University: