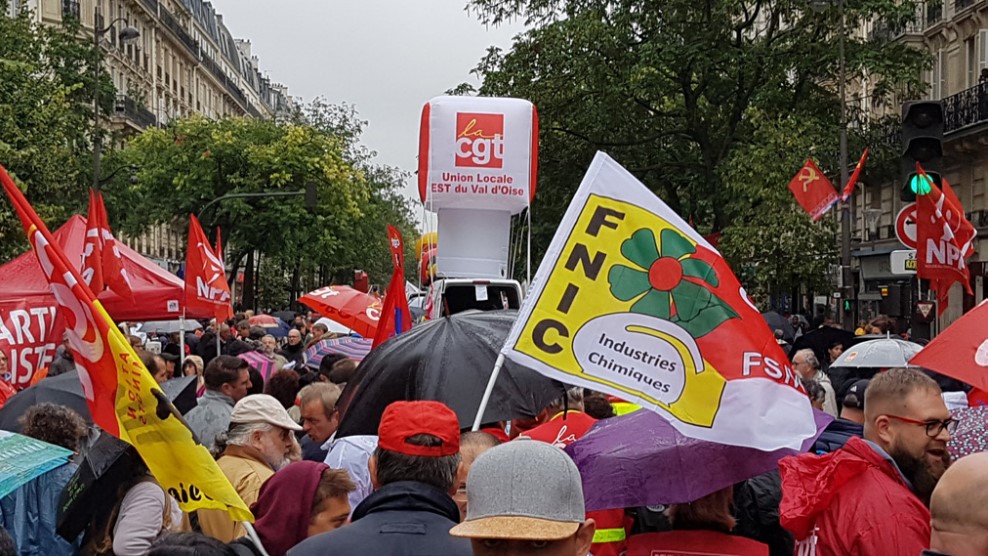 On 11 October, the French government decided to use state powers to “requisition” several oil depots where workers had been on strike since 27 September. This has led to a call for a day of national strike action on Tuesday (18 October). Coming off the back of a large demonstration against the cost of living yesterday (16 October), the class struggle in France is roaring back onto the scene.

With four out of the country's seven refineries shut, the strike of the oil workers is causing widespread shortages at petrol stations across the country, which are starting to affect transport and essential services and slowly bringing the country to a halt. Oil workers are demanding a 10 percent wage increase to keep up with inflation.

Despite a vicious campaign by the media and right-wing politicians, the oil workers have widespread public support, as millions of workers in other sectors are facing a similar assault on the purchasing power of their own wages.

Faced with state intervention against the oil workers' strike, the militant National Federation of Chemical Industry workers of the CGT, FNIC-CGT, has issued an appeal to generalise the strikes to other sectors. 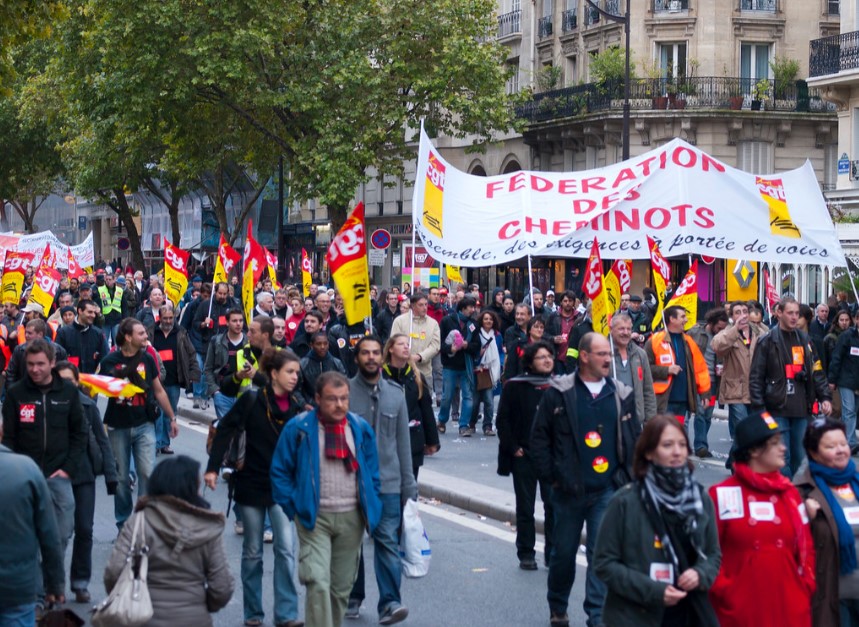 Multiple unions, such as the transport union CGT-Cheminots have announced action on 18 October in solidarity with the energy workers / Image: Rafael Lopez

A joint meeting of trade union organisations (involving the CGT, FO, Solidaires, FSU and high school and university student organisations Fidl, MNL, Unef and Vie lycéenne) decided to call for a “national day of mobilisations including strikes” on 18 October.

The CGT was talking of a “general strike across all sectors.” The call could serve as a rallying point and mark the start of a generalised strike movement. Other sectors had already been joining in with strikes at nuclear power stations, aerospace and car companies, as well as the chemical industry, amongst others. Railway workers were already voting to strike, some from 17 October, others as of the 18th.

The three remaining French oil refineries are expected to join the national strike, with the FNME-CGT announcing that an “enlargement (...) to all energy companies is fully assumed.”

Transport unions CGT-Cheminots and Sud-Rail have announced action on 18 October, offering solidarity with the energy workers, and demanding pay rises for their members. There is also talk that bus drivers under the public transport company RATP might participate.

Additionally, strike notices have been filed by the public services union UFSE-CGT, which in as well as pledging “full support for the oil industry workers' strike”, is asking for an immediate 10 percent wage, with inflation-matched increases thereafter, and is opposing any attempted pension reforms.

Also, CFDT-Santé, the leading, 200,000-strong union in the private medical sector, called for a strike on 18 October, with members instructed to down tools in clinics and retirement homes. This is a notable development, as previous strikes have been undermined by a lack of coordination between private and public-sector workers.

Macron in a bind

In addition to mounting opposition on the industrial front, Macron is also in a bind in parliament. Having lost his majority in the general elections, he is struggling to pass his new state budget, which strives to bring inflation back under control. 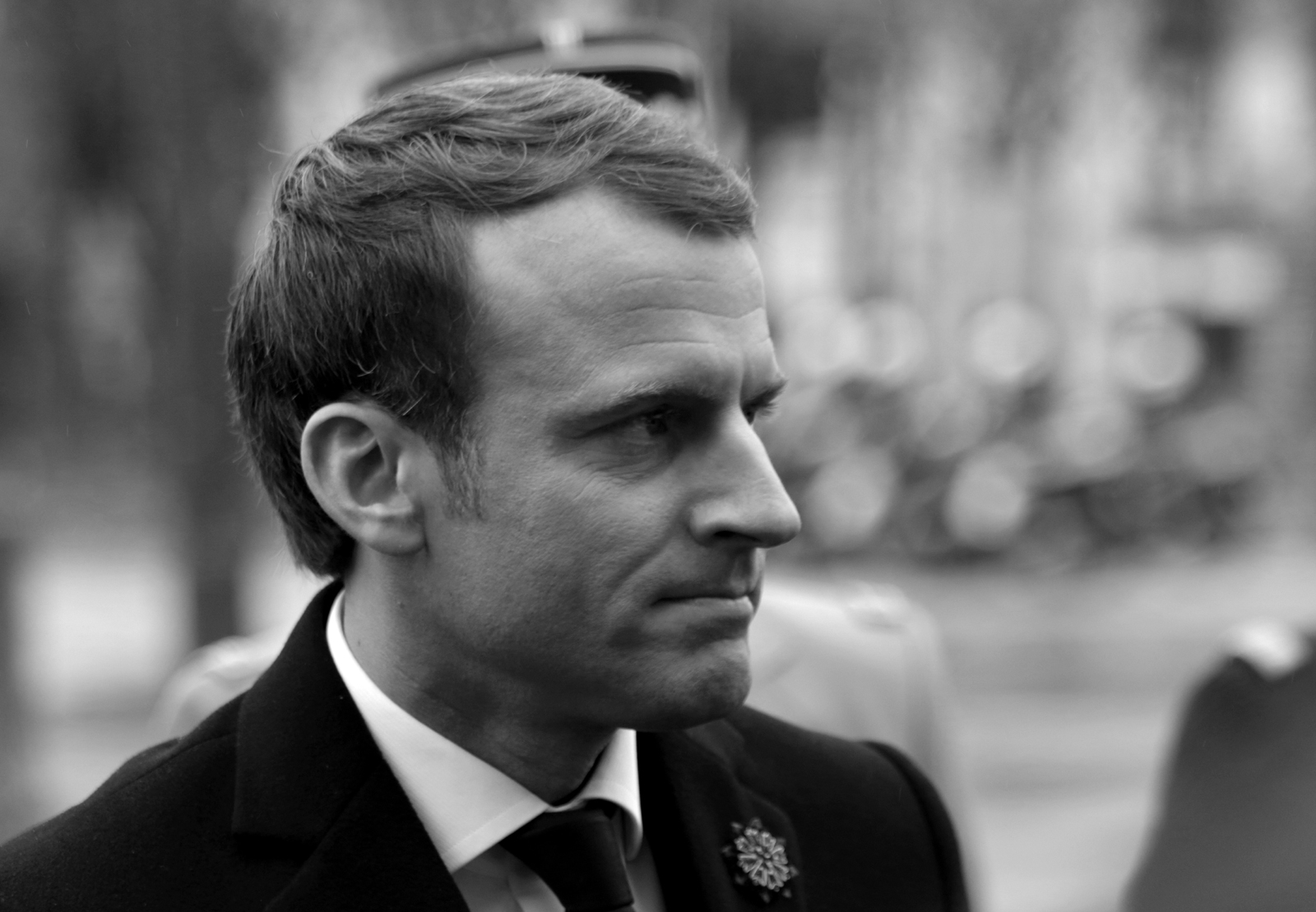 If a vote of no confidence were to happen, Macron would not be guaranteed to win / Image: Remi Jouan

Already, he has backed off from including a long-planned increase in the retirement age, and faced strong opposition to state spending cuts. An amendment has been passed by a coalition of opposition MPs, introducing new taxes to discourage French companies from paying ‘super-dividends’ to their shareholders.

The French Council of Ministers has just approved the use of article 49.3 of the Constitution, a mechanism that allows the executive to force laws through parliament without a vote, “if the situation requires it”.

This move, considered a ‘nuclear option’, would be extremely dangerous. Not only would it enrage the masses, but it could lead to a vote of no confidence that Macron would not be guaranteed to win.

France Insoumise (LFI), which leads the main left-wing opposition coalition in parliament (NUPES) called for a national demonstration on 16 October against the high cost of living and the climate crisis. The Socialist Party and the Greens as well as dozens of other organisations joined in.

In the run up, LFI leader Melenchon mentioned the women marching on Versailles against the high cost of living in 1789, sparking the French Revolution, and called on protesters on October 16 to “better them”. The demonstration was very large, with organisers putting the final turnout at 140,000, declared by Melenchon to be an “immense success”.

He declared at the main rally in Paris that Macron’s leadership was “fried” and he was plunging France into chaos, pledging that: “we're going to have a week the likes of which we don't see very often.”

“The refinery strike, the demonstration of October 16 and the [strike] of October 18 can mark a turning point in the political and social situation. With his usual arrogance, Macron castigated, yesterday, the ‘handful of people’ who paralyse the refineries.

“On October 16, October 18 and beyond, we must initiate a vast movement to put an end to the “handful of people” who control the economy of this country and gorge themselves on profits, while the people sink in deprivation and precariousness.”

For an open-ended general strike to bring down Macron!

But our French comrades raise a note of caution in a recent editorial:

“We have said it over and over again… trade union ‘days of action’, however massive they may be, cannot make the government back down. And as these days of action are ineffective, inevitably, they mobilise fewer and fewer people. The last day of action on 29 September, for example, went largely unnoticed.

“The government will only back down in the face of the development of a vast movement of renewable strikes, embracing a growing number of sectors of the workforce. However, the national leaderships of the trade union movement refuse to recognise the need for this strategy, to explain it – and therefore to seriously prepare our class for a movement of this nature. This is a significant obstacle, but only a relative one. The passivity and moderation of the union leaderships cannot prevent social anger from expressing itself in a radical form, sooner or later. We saw it with the Yellow Vests movement in 2018 and 2019.”

Up until now, the trade union leaders have used isolated days of action as a release valve to let off pressure amongst the working class, or at best to bring their members out on the streets to create leverage for behind-the-scenes negotiations with the bosses and government. In short, they strive to keep the working class within safe channels.

The strong showing this weekend is one more indication of the anger that exists in French society. But in order for this anger to be translated into militant action, capable of toppling Macron and putting an end to the onslaught of attacks against working people, we need to build for a widespread, political, open-ended general strike that will paralyse the country.

Already, the rail workers, heavy battalions of the working class, are raising the prospect, with a representative of SudRail saying members “will hold general assemblies on Tuesday, October 18 all over France and we will ask the question of the renewable strike.”

This is the way forward. France is on the verge of boiling over once more, and the conditions which are threatening a mass movement there exist across Europe. What is needed is a radical programme of class struggle and a bold, determined leadership capable of prosecuting this fight to the finish.