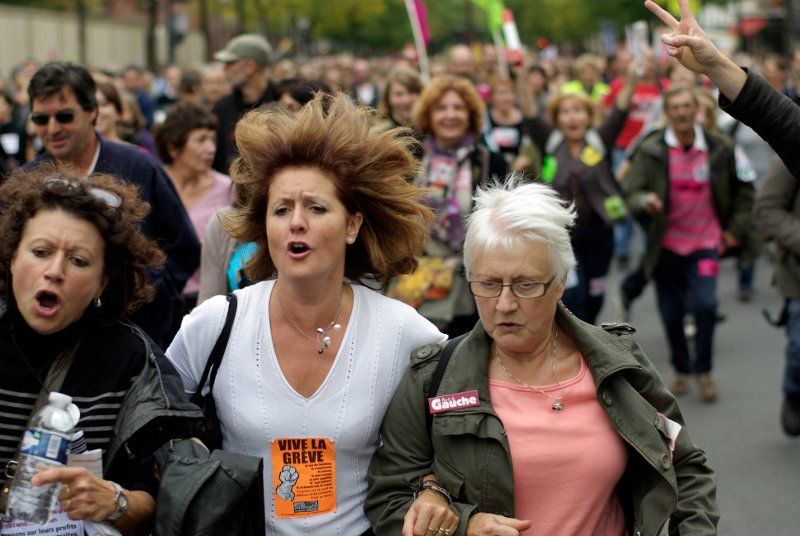 The struggle against the attacks on pensions in France is perhaps moving onto a higher stage. After mass demonstrations mobilising between two and three million workers, on 7th and 23rd September and on the 2nd October, a new demonstration is planned for the 12th. The national leadership of the trade unions intends to limit the action to “days of action” of this kind, but rank-and-file pressure is growing in favour of indefinite strike action.

Through their general assemblies, workers in key sectors of the economy are pressing for all-out strike action to begin on the 12th. This is the case in the railways and road transport, in the electrical industry, in the chemical industry (including Total oil industry workers), in ports and docks, in the television and radio sector, and in several branches of the public services, including teachers. Furthermore, school students and universities are starting to move into action. In Rodez thousands of school students took to the streets in solidarity with the struggle against the pension reform, but also to express their hostility to “Sarkozism”. A similar movement broke out in Toulouse. The port of Marseille is already paralysed by strike action.

These developments indicate the growing mood of anger and the readiness for determined mass action on the part of a significant section of the French working class. Polls show that Sarkozy has hit a new low in popularity ratings, with only 26% in his favour. The wave of indignation provoked by the racist campaign directed by the government against the Rom community, and the financial scandals involving members of the government, have further undermined his position, creating to an atmosphere of “fin de regime” at the head of the state. This acts as a stimulus to the class struggle. A weak and divided adversary encourages and emboldens the workers.

However, it cannot be said for certain what will happen on and after the 12th. If the national leadership of the main trade union confederations were prepared to give a lead and arouse the mass of the workers to action, Sarkozy would be in an impossible position at the present time. But this is not the case. The most important and militant confederation, the CGT, is led by Bernard Thibault. But Thibault is striving to prevent the development of a general strike. 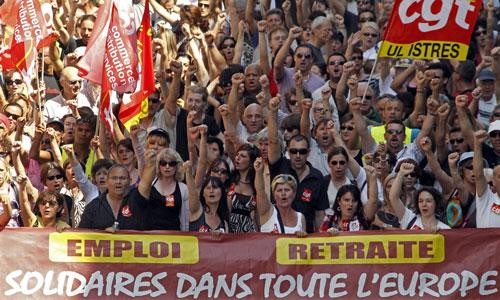 Interviewed on RTL Radio on 7 October, he didn’t like the term “radicalisation” used by the journalist questioning him. The struggle was simply “entering a new phase”, because the government had not made any concessions in the wake of the “days of action”. Nobody should be surprised, that things had got to this point, he said, since the government was being so obstinate in its refusal to organise a “real national debate” on the future of pension schemes. “We are not surprised”, said the journalist, “but what do you want ? Do you want to go towards a general strike ?” “I don’t want anything in particular”, replied Thibault, “but the President and the parliamentary majority must understand that they cannot impose this reform on the country, when a majority of the people is opposed to it.”

The journalist tried to get in vain to get a clear answer: “It seems that you do not want to pronounce the term ‘general strike’. You seem hesitant, so that we don’t know whether you are leading the movement or following it from behind”. “The general strike”, replied Thibault, in an astonishing denial of basic historical facts, “has never been part of ‘social practice’ in the entire history of the country. The call for a general strike is just an abstract and obscure slogan. That is not the way to achieve a [more favourable] relationship of forces.” “But do you want a general strike?” asks the journalist, again. “I want a fresh look at the reform [by the government].” “Yes, that is your aim, but what are the means that you propose ? […] The government says you are behaving in a responsible way. Is that not a sign that you don’t know which way to go with this movement?” But all the attempts of the interviewer to get a clear idea of what the CGT is proposing ended in failure.

This interview and many other of a similar nature show how the leadership of the CGT is desperately trying to resist the growing pressure from below for indefinite strike action. And what is true of the CGT leadership is even more flagrant in the case of the traditionally more “moderate” confederations, such as the CFDT and FO, whose leaders are nothing more than conscious agents of the government and the capitalists. It cannot be ruled out that they will succeed in preventing the development of a general strike. This is part of a living struggle and it is not possible to say how things will go in the short term. Many factors come into play, including that of the school and university students. If the youth move into action on a massive scale, it will be extremely difficult for Thibault and the other union leaders to prevent a general strike. The withdrawal of the Devaquet educational reform in 1986, the concessions made by Juppé in 1995 and the abandonment of the “First Employment Contract” (CPE) in 2006 were all the result of the union leadership losing control of the movement from below. These reactionary measures had to be abandoned in order to prevent the emergence of a mass strike along the lines of that of 1968. Such a development is implicit in the present situation in France.

Even if a general strike is prevented for this time around, the entire economic, social and political situation is preparing the ground for a massive movement in the coming period. Under present conditions, once the working class moves into action in a decisive way and on a mass scale, France will move rapidly in the direction of a new revolution.