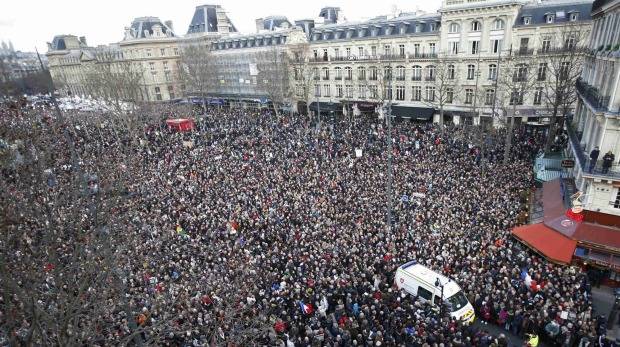 Over the weekend several million people took part in demonstrations in Paris and many provincial cities of France. The government and the whole official establishment had called for the demonstrations and announced their participation. On Sunday evening, Prime Minister Manuel Valls, declared that the people had rallied “behind President” François Hollande.

In reality the vast majority of the participants were not rallying behind the President, whose popularity on the eve of the attack stood at the lowest ever registered for a president of the Fifth Republic. They wanted to express their anger, their concerns, their solidarity with the victims, their rejection of racism and religious fundamentalism, their commitment to freedom of expression and other sentiments which are completely unrelated to the person and the authority of François Hollande.

The magnitude of the protests is an indication of the profound malaise which for years has been developing below the surface of society and which was suddenly crystallised by the attack against Charlie Hebdo. 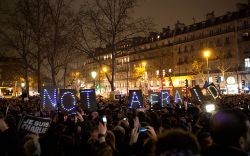 In describing the demonstration, the mass media concentrated on the national flag, the spontaneous singing of the Marseillaise and the applause for the police. But most of the protesters were not defending the status quo or merely calling for a return to the situation preceding the attack. They expressed a the desire for a serious change in the social order.

One young protester who was interviewed by a journalist explained the reasons for her participation: “I am here because our society today lacks solidarity. We must have a society with more solidarity”. In the speeches of the politicians the calls for “freedom” and “solidarity” were just mechanical and empty catchphrases devoid of content.  In the minds of the many protesters this weekend, these words expressed a profound - albeit confused - aspiration  for a better society.

The crisis of capitalism has had disastrous economic and social consequences. But the impasse of this system does not only express itself in the explosion of unemployment, poverty and insecurity. It also challenges all political, moral and religious norms. The famous motto of the French Republic - "Liberty, Equality, Fraternity" -  sounds like a hollow formula in the light of the real social situation. Many of the protesters interviewed by journalists insisted on the need to give “real content” to this motto. That is a legitimate demand, but achieving it requires a break with with the economic and social system on which the French Republic is based - a system whose real motto is: “exploitation, inequality and repression.” 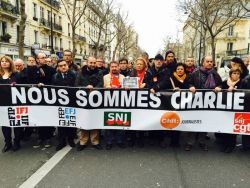 How many of the protesters were aware of this contradiction between their own very progressive aspirations and the survival of the capitalist system? Undoubtedly only a small minority, which is made even smaller by the fact that the official leaders of the workers’ movement has not taken the time to explain this contradiction. In fact, they refused to give the mobilisations any class content. On Wednesday, in an inevitable reflex reaction, they all rallied behind the appeals of the right wing and the government for “national unity”.

A public communique issued on the website of the French Communist Party - PCF - on 7 January stated: “Pierre Laurent and the national leadership of the PCF call for national unity of all republican forces in the face of barbarism.” The same communique continued to appeal to all “Republicans” - exploiters, exploited, rich and poor, capitalists and workers - to “gather the whole nation in the spirit of confidence in our people and around the essential question, irrespective of one’s philosophical and political thought or religious beliefs.”

Thus the “Republic” is considered as the essential question according the leadership of the PCF, essential enough to justify the unity of all the classes, in spite of the mass layoffs,  the destruction of public services, the deportation of undocumented immigrants, the prostitution of the mass media, the imperialist wars and other inessential details.

Over the past days the leaders of the Communist Party, as well as those of the Left Party and all the unions, have all been joining in the endless repetition of this hollow and de facto reactionary slogan. Thus, they are helping the right wing and the government in avoiding taking responsibility for terrorism and fundamentalism for which they are in fact overwhelmingly responsible. Instead of calling for national unity, the leaders of the Left Front (which includes both the Communist Party and the Left Party) should expose the hypocrisy of the ruling class and call for the ending of the direct support which French Imperialism - under both the Sarkozy and the Hollande governments - has been giving fundamentalists in Syria as well as Libya. They should explain the role of the imperialist wars in fomenting terrorism in the Middle East over the past decades. Before the last war in Iraq, for instance, there were no Islamic fundamentalist organisations in the country. Today Iraq is ravaged by fundamentalism. Is that so hard to understand or explain?

Now and then, some commentators recognise that the material situation and the moral despair of many young Muslims in France, helps the work of Jihadist networks and organisations. That is true, but we must also add this: imperialism - including French imperialism - is the most efficient recruitment agency of young Jihadists in the West. When young Muslims, who have been deprived of a future, see the atrocities committed by the imperialists in Iraq, in Afghanistan and in Palestine it is not surprising that fundamentalist propaganda finds an echo amongst some of them. It is even less surprising in the light of the betrayals of the ruling Socialist Party - which despises and stigmatises them - and the Communist Party leaders abandoning of the goal of Socialism, preferring instead an extremely vague reformist programme and, occasionally, “national unity” with the imperialists.

In another communique published by the PCF just before the demonstration on Sunday, there is no mention of the international “bloc” composed of reactionary heads of states, ministers and Prime Ministers - amongst which a number of state terrorists - at the head of the demonstration. Is it in respect of the “the philosophical and political thoughts” of these gentlemen that the PCF does not mention the presence of Netanyahu, the executioner of Palestine, or even the Ukrainian president Poroshenko, the executioner of his own people? It is true that the crimes of the imperialists and state terrorists who had been invited by Hollande to unite around this “essential question” are too many to list  in a brief press statement. But to say nothing and instead to go on about the “values of the [Capitalist] Republic” is simply lamentable.

The rushing over of many heads of state and prime ministers on Sunday, to come and pose for the cameras is itself an illustration of the severity of the crisis facing world capitalism. These ladies and gentlemen, rulers of often unstable or very unstable regimes, see an opportunity - a very rare one from their point of view - to pose as defenders of freedom and democracy. At the same time, the rally was a prelude to new “anti-terror” laws and measures, which in France and elsewhere will result in the restriction of democratic rights for the vast majority of the population. The workers’ movement must denounce this manoeuvre and firmly oppose all restrictions to our democratic rights under the cover of the “fight against terrorism” At the same time it must oppose all attempts to use the tragic events of the past few days to justify the military interventions of French imperialism.

Another urgent task of of the left and the workers’ movement is to fight back against the wave of racist propaganda and the coming attacks against Muslims. Such attacks have already been taking place. “Incidents” such as the attacks against mosques, kebab shops, etc., are increasing. The mass media, the journalists and the politicians, one after another, are all saying that “we should not generalise and lump Jihadists together with Muslims, but...” - but the Muslims must constantly “demonstrate more clearly that they are committed to the values of the Republic”; but they should be monitored more closely; but every symptom of a drift (towards jihadism) should be punished harder and so on. Sunday evening on television one journalist covering the rally reported that Muslim protesters felt “insulted” when they were asked to “disassociate” themselves from the barbarism of the fundamentalists. This insult will be repeated everywhere. Such racist propaganda can take subtle or blatant forms, but it will be constant and will encourage far right elements to attack Muslims.

It is the responsibility of the workers' organisations, and particularly the trade unions, to organise the defence of the Muslim and immigrant community in general against sectarian attacks. We should not leave this to the state and its police which is riven with racism.

The government's attempt to exploit the events to regain some popularity will not last long. The wave of emotions will die down and the workers will rediscover the familiar problems: the rise in unemployment, stagnating or falling wages, the dismantling of public services, lack of housing, cuts, counter-reforms… Hollande and Valls will continue to carry out their dirty work at the services of big business. All of this prepares the terrain for big social struggles. Millions of people will take to the streets again, but this time with slogans clearly against the ruling class and their crisis-ridden capitalism. When that happens, only a programme of class independence and struggle for the revolutionary transformation of society will lead to victory.