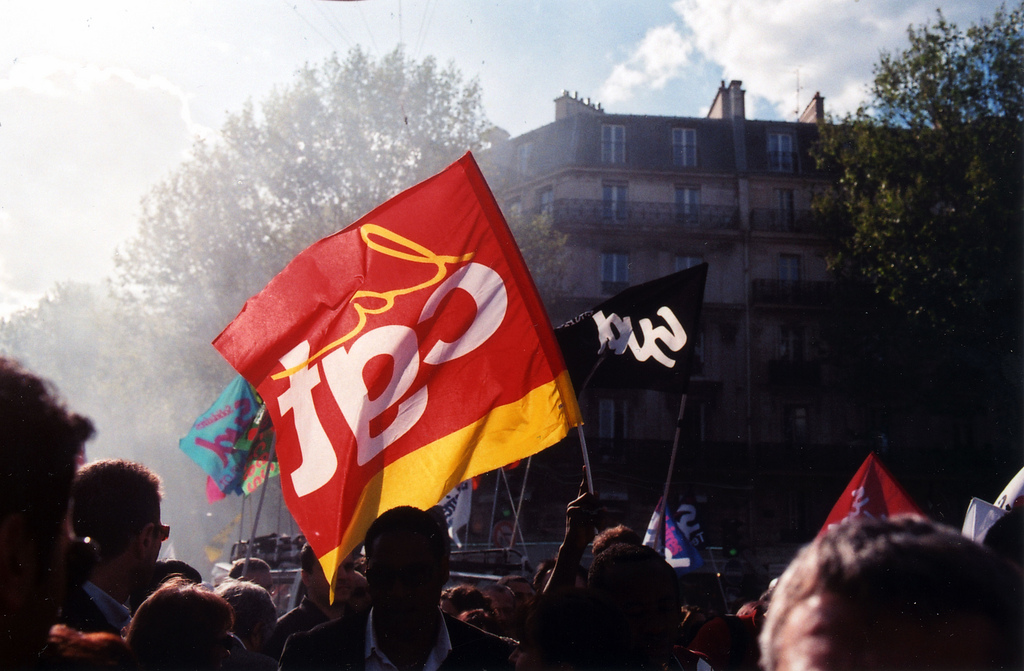 The latest issue of Révolution (French organ of the IMT) will be published in the wake of a social movement that could mark a turning point in the correlation of forces between our camp (the youth and workers) and the bosses, of which Macron’s government is the executive body. A rail strike, starting from 3 April, will be the focal point of the struggle. But, both for us and for our enemies, the significance of this strike goes beyond the fate of the SNCF [Société nationale des chemins de fer français: France’s national state-owned railway company] and its employees.

The railway workers are one of the most powerful and militant layers of our class. They occupy a key position within the apparatus of the productive forces: when not a single train is running, the entire economy can only move in slow motion. Because of this, but also because the railway workers have a great history of struggle, their mobilisation can play a decisive role in setting other sectors of the proletariat in motion.

This is what happened, for example, during the big strike of December 1995. However, more so today than in 1995, all the layers of our class ‒ and the student youth ‒ have an interest in mobilising, as they are all under brutal attack by the Macron government. 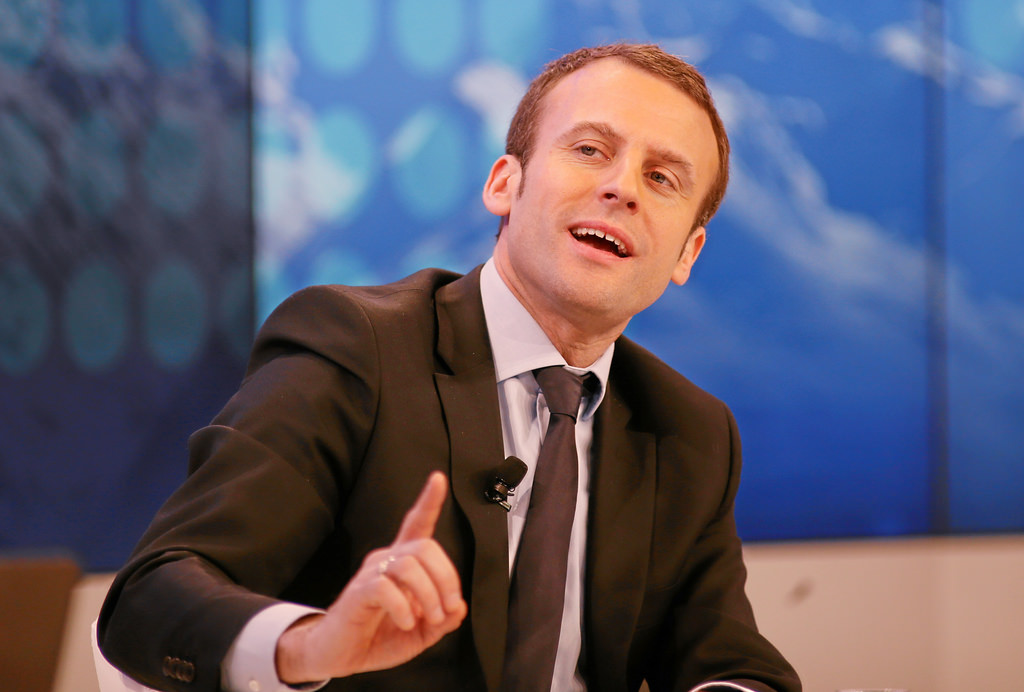 The French ruling class is determined to defeat the rail workers, to demoralise their whole class / Image: WEF

It is for these same reasons that the French bourgeoisie is determined to defeat the railway workers. For the big bosses, privatising the SNCF and tearing down the position of its employees is of course an important economic goal. Enormous profits lie at the end of the tunnel for them, should they pull off this project of industrial and social ransacking.

But for the capitalists and their government, the stakes are higher, more general, more political. Through attacking the railway workers, Macron wants to strike at the entire working class; he wants to weaken and demoralise them, in order to push through his programme of drastic counter-reforms on the double.

Conversely, a victory for the rail workers would encourage all the other layers of the proletariat. It would put the government on the defensive and, at the very least, it would complicate the implementation of their reactionary programme. This strike is therefore not only a dispute between the employees and the management of the SNCF; it is the focus of a generalised struggle between the two fundamental classes of society.

Therefore, it is clear that the government will not back down easily. They are keeping some fictitious ‘concessions’ in store, to use as a tool to divide the movement. But they will hold onto them as a last resort, at least unless social mobilisation reaches a certain threshold. While it’s impossible for us to predict in advance what this threshold is, what is certain is that the government will back down if the struggle appears to have the potential to spread to all sectors of the economy. It was the fear of stirring up the masses ‒ in short, the fear of a new May ‘68 ‒ that made the Juppé government back down in December 1995.

How we will win

The strategy of a slowdown [two days of strike, three days of work and so on] spread across three months has raised many questions. Only the SUD Rail trade union has called for indefinite strike action starting on 3 April. The rail workers are divided on this question.

Arguments in favour of a slowdown are widespread, including amongst rank-and-file union activists. This is understandable. But what is clear to us is that a slowdown cannot hold for three months, and that the government will not give in if faced with a movement of this kind. It will place all its bets on the industrial action running out of steam. Therefore, in order to win this struggle, the proposed slowdown must only be a short transitional phase on the way to indefinite strike action. 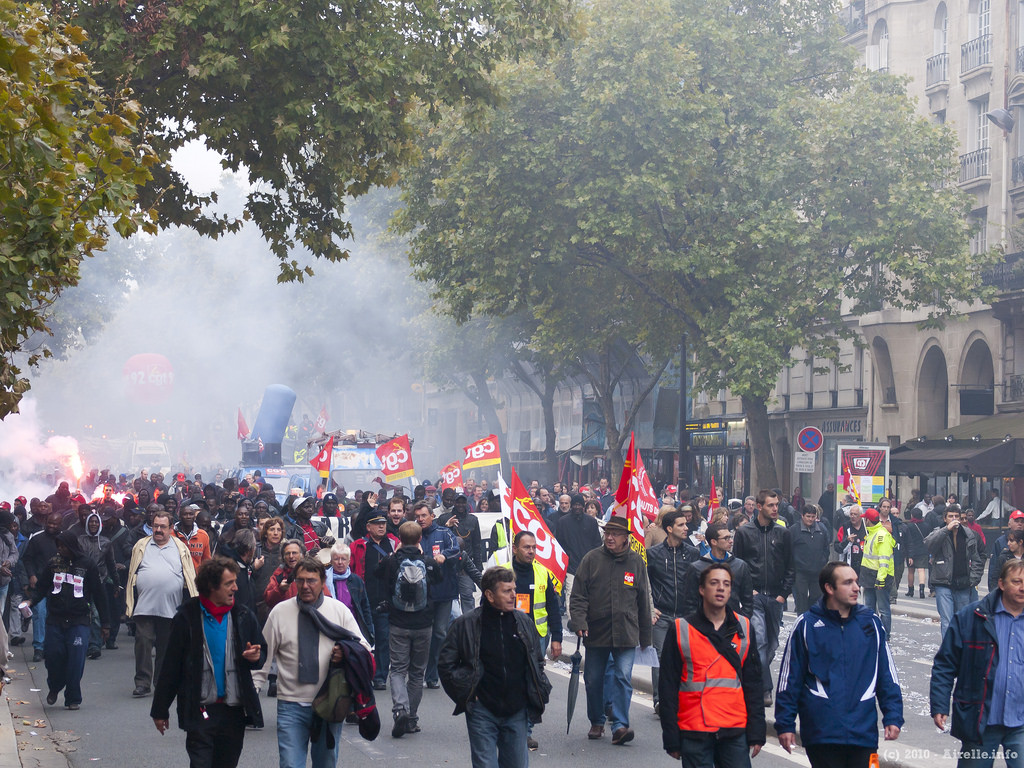 The CGT is telling workers to go on strike starting from 3 April / Image: Flickr, Rafael Lopez

All this will be discussed in the general meetings of the rail workers. If they feel that the correlation of forces is favourable to them, they will be more inclined to go on strike. But their decision won’t depend solely on the balance of forces inside the SNCF, i.e. the sturdiness of a potential strike; it will also depend on the involvement ‒ or lack thereof ‒ of other layers of the proletariat in the movement.

At the time of writing, the public service and transport unions that are part of the CGT [Confédération générale du travail, the biggest French trade union confederation] are calling on workers who collect, transport and treat rubbish to go on strike starting from 3 April. These workers, whose labour conditions are very difficult and dangerous, have their own demands, of course. But if they go on strike, their concrete mobilisation will have all the more strength and impact as it develops along the same lines as that of the rail workers. It goes without saying that these two strikes would mutually reinforce each other.

The ideal situation would be for other trade union federations to organise a strike action movement starting on 3 April ‒ or, at least, on one of the days immediately following. We know very well that such mobilisations are not decided in the offices of trade union leaders. But at least, they should explain the necessity of such a movement to the workers and try to mobilise in this way ‒ which they don’t do, for the most part.

Despite this, the protests on 22 March showed the militancy of several layers of civil service employees, amongst others. The trade union leadership should take advantage of this momentum to mobilise. Instead, they are proposing a new ‘day of action’ on 19 April, 16 days after the start of the rail workers’ strike. Even if this day of action has a massive turnout, it won’t have any impact if it doesn’t build on a rising wave of strikes in different sectors of the economy. If not, it will be too little, too late.

The rail workers’ strike opens a window of opportunity to the youth and the totality of the workers’ movement. But this window of opportunity is, by definition, limited ‒ in this case, to a few days, a few weeks at the most. The enemy being targeted is the reactionary Macron government. How far could this movement go, if it takes off? We cannot predict its limits in advance. Almost half a century ago, on 13 May 1968, a 24-hour general strike opened the door to the largest indefinite general strike in history: for several weeks, 9m workers went on strike and often occupied their workplaces.

The French bourgeoisie is still haunted by this revolutionary crisis. Incidentally, it is remarkable that its representatives, in government and elsewhere within the state apparatus, are still committing the same blunders (from their point of view) as they did 50 years ago.

Let us not forget that it was police violence against students at the beginning of May ‘68 that pushed the leadership of the trade unions to organise a 24-hour general strike. And yet these last weeks have seen multiple cases of police violence, or violence by far-right thugs like in Montpellier. These instances of violence not only don’t intimidate the youth, but in fact serve to radicalise them further and spread the movement wider, just like in ‘68. And all this comes from the government’s side in an attempt to avoid a mobilisation of the youth like the one in May ‘68! It’s enough to make one think of the tragic Greek hero, who fulfils his destiny through the very act of trying to avoid it.

The month of April could be decisive. By declaring war on the rail workers, Macron has declared war on all the exploited and oppressed layers of the population. Everywhere, left-wing activists and trade unionists must assess this struggle and organise a massive response, even if it means ruffling the feathers of the inert and conservative trade union federation and confederation leaders ‒ like in May ‘68.