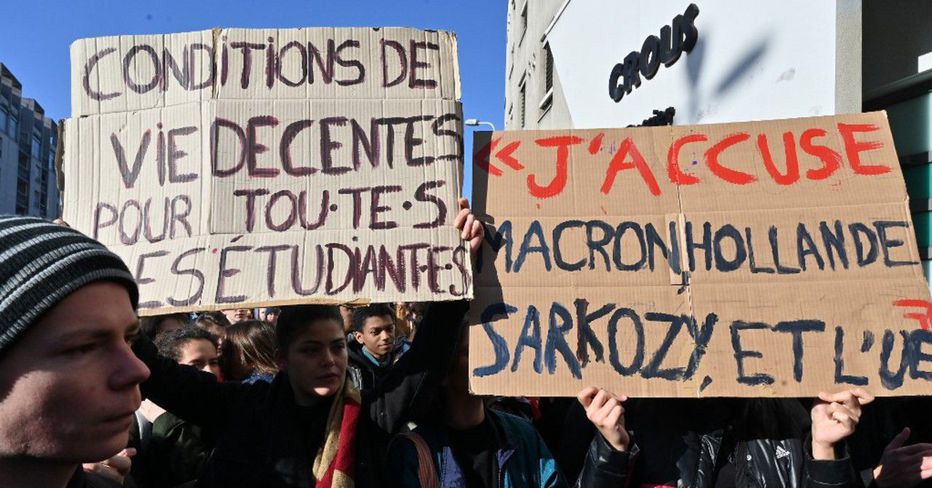 "Today, I'm going to commit the irreversible, so if I target the building of the CROUS [student services authority] in Lyon, it is not by chance". Thus begins the Facebook post written by A.K., a 22-year-old student and activist of Solidaires, before sprinkling his clothes with gasoline and immolating himself in front of CROUS headquarters in Lyon on Friday, 8 November. Burned on over 90 percent of his body, he is today lingering between life and death.

This is indeed an irreversible gesture, as he himself wrote, but above all it is a political gesture that emphasises once again that the capitalist system is no longer able to guarantee the basic needs of an increasingly important part of the world population: students and young people.

Last year, A.K. lived in unsanitary student housing and was struggling to make ends meet for the month with only his €450 bursary. At the start of the 2019 school year, his accommodation and scholarship were withdrawn by the CROUS. A few days before his suicide attempt, he was denied emergency assistance. In France, in 2019, it is in these conditions of permanent precariousness many students must endure, after years of crisis and budget cuts aiming to make workers and young people pay the price of the crisis of capitalism.

A.K. is not an isolated case. INSEE estimates that, in 2018, poverty has increased enormously and that this increase has mainly affected women and young people. Today, nearly 20 percent of young people live below the poverty line, in a context where the cost of living has been steadily increasing since 2009, especially for students. In its report for the start of the 2019 school year, the student union UNEF pointed to an increase of 2.83 percent in the cost of living, as a result of rising rents, the cost of transport, but also registration fees and university restaurants. As if that were not enough, access to scholarships and student housing is increasingly difficult and, as at Pôle Emploi, exclusions are more and more systematic. The case of an anonymous student present at the demonstration to pay homage to A.K. in Lyon is exemplary in this respect. Due to being hospitalised, she was absent from an examination and was automatically excluded by the CROUS, despite all her medical certificates.

Other measures have hit all students, starting with the fall of housing assistance (APL) in 2017. As living proof of the blindness and disconnection of the ruling class, Macron said at the time that 5 euros less a month was nothing. One year later, LPAs have been deindexed from the rent revision index, even though they are constantly increasing. In addition to the decrease in housing benefits, it is difficult to find a student room in a CROUS: according to the Observatoire de la vie étudiante, only 12 percent of students live in a university residence. Indeed, no government promises to build social housing for students were upheld. The consequence of this situation is that one in two students are obliged to look for work alongside their studies, thus endangering their academic success.

The anger of the youth

Despite the silence and contempt of the government and the bourgeois media, A.K.’s act had a huge echo. Thousands of students and young people identified themselves as being in the same hopeless situation that pushed him to the limit. On Tuesday, 12 November, several demonstrations took place across the country to express the fury of young people, and general meetings were held in several universities. Student unions have called on the government to increase scholarships and adopt emergency measures. But nothing of the sort can come from this government and its anti-people policies. On the contrary, it is already busy preparing for future counter-reforms that will affect all sections of the population, such as pensions counter-reform currently being prepared. If we want to put an end to these attacks and improve the situation of students and young people in general, we must attack this government and the capitalist system it serves.

Today, everywhere in the world, we see explosions of the class struggle, and mass revolts where students are in the front line against the attacks of the ruling class. In France too, the mobilisation of students must be one with that of the workers. They are attacked at the same time by the same enemy. Only together can they defeat this enemy. The last wish of A. K., as he wrote himself, was that his comrades continue to struggle. It's up to us to make sure that his act has not been in vain.