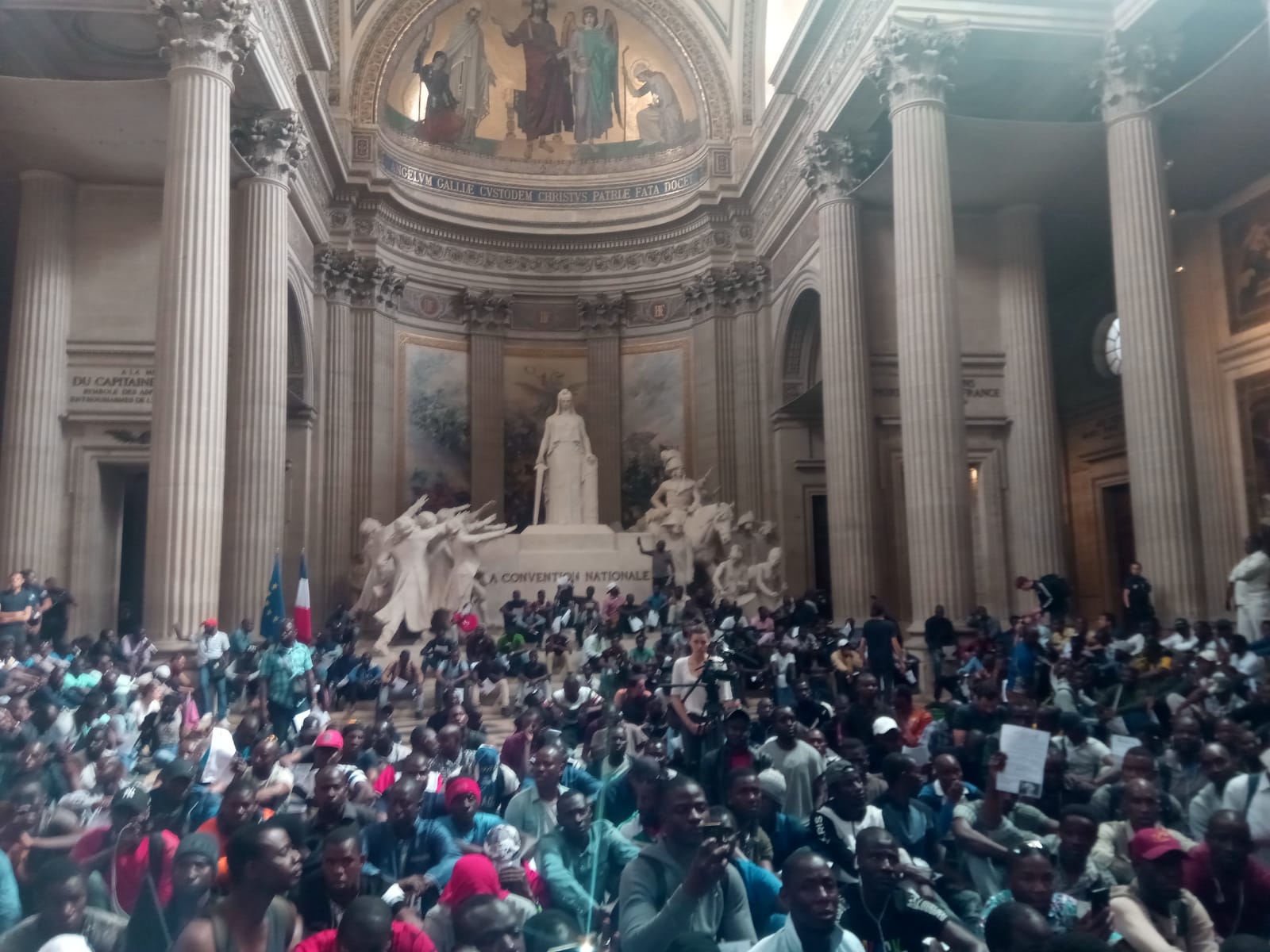 600 people occupied the Pantheon in Paris last Friday (12 July) in protest at the repression of undocumented migrants, who face racism, terrible living and working conditions; and the constant spectre of detention centres and deportation. These activists of the “gilets noirs” (black vests) were demanding (among other things) that Prime Minister Édouard Phillipe grant them documents to legally live and work in France.

As museum staff ushered out patrons, who had come to pay homage to the bones of national heroes like Voltaire, Curie and Hugo, the gilets noirs peacefully distributed flyers explaining why they were occupying. They stated:

“We are the undocumented, voiceless, faceless for the French republic. We come to the graves of your great citizens to denounce your irreverence [and]... to demand the Prime Minister give papers to all undocumented migrants in France."

After occupying the building, the protesters chanted: "What do we want? Papers! For whom? Everyone!" Following negotiations with the Pantheon staff and police, it was eventually agreed that, if they peacefully left the building, the gilets noirs would be free to go unmolested. But as they filed out they were immediately set upon by the police – leading to a number of arrests.

According to journalists on the scene, the protesters were “treated like cattle”, being hit by several police charges and roughly detained. There are images on social media of police standing on the backs of prone gilets noirs, smiling, and a photographer from the Liberation newspaper was also assaulted. The brutality of the French state, showcased to its fullest throughout the gilets jaunes movement, was yet again on display.

The following day, a group of gilets noirs assembled at a police station to demand the release of members collared at the Pantheon. One demonstrator furiously underlined the role of French imperialism in the current plight of migrant workers:

"This is our home. The only crime of those arrested is to have been born outside France. If we are here it is because France colonised our countries."

On July 12th, the #GiletsNoirs peacefully occupied the #Pantheon in Paris where they were met with violent police repression. Up to 50 people were injured and 37 were arrested in police charges. 20 activists remain in custody. pic.twitter.com/8Sk2UKoQ62

The gilets noirs have been building their campaign for months, inspired by the gilets jaunes protest movement that has been battling Macron’s government of the rich since October 2018, bringing over half-a-million people onto the street at its height. The gilets noirs are nowhere near the scale of the original movement, but have been influenced by its methods and militancy.

One gilet noir, known as Kanouté, said in an interview that the gilets jaunes “represent a powerful force in France right now, because they are protesting every week, and they are not giving up. And this is what we related to when we chose our name – the fact we want to be as powerful as they are, and that we didn’t want to be afraid any more – to act in whatever way possible to fight for our legitimate rights.”

The gilets noirs have gained a larger profile thanks to an open letter, signed by a number of French celebrities, published by Libération in June. That same month, MP for France Insoumise, Danièle Obono, also delivered a letter from the group to PM Philippe.

The Pantheon occupation was not their first public act. Last November, 400 gilets noirs protested for the release of migrants from French detention centres, which they aptly describe as “prisoners for foreigners” – housing 46,800 detainees as of 2017, including 2,797 minors. In December, 700 assembled outside the Comédie Francaise, demanding an audience with the Interior Minister to request decent housing for migrants.

Unvievable violence, completely unprovoked and with only one possible outcome. Tens of people injured. An activist told me that they will be lucky if no one died. Police refusing to let injured people out. #giletsnoirs pic.twitter.com/YZWH37BzPF

In May, a few hundred gilets noirs occupied a terminal of Paris’s Charles De Gaulle airport in protest at Air Frances’ role as “the official deporter of the French state.” And in June, they occupied the offices of cleaning and catering company Elior in the La Défense business district of the capital.

Migrant workers in France can work for secure immigration status, but their employers must sign documentation before applications are considered by the state. Many companies, like Elior, refuse to do so, because it is easier to exploit workers when they can dangle the threat of a detention centre over their heads.

Just as the gilets jaunes movement initially began over a fuel tax hike, but quickly exploded into a protest against wider injustices against the poor and working class, the gilets noirs’ demand for legal immigration status is connected to the whole rotten edifice of French capitalism and imperialism.

At an assembly after the Elior protest, the gilets noirs described Paris’ business district as “the heart of imperialism”, and stated the companies headquartered there “plunder Africa”:

“Suez steals his water, Societe Generale steals his money and finances the pollution of Africa with coal-fired power plants. Thales build the weapons with which they wage war. The same people who destroy our lives over there are waging war here!”

“[French companies] don’t want countries in Africa to be independent, because then they can’t make a profit from us. They just want us to stay down on our knees, and then they can exploit our resources and make profits… They are dividing people in Africa, so they can control them.”

Similarly, the leaflets distributed to visitors to the Pantheon on 12 July made it clear that the movement is not just about illegal migrants getting their papers. The materials stated that, through the exploitation of undocumented migrants and its imperialist actions in Africa, “France continues slavery through other means… We are not simply fighting for documentation, but against a system that makes us undocumented immigrants."

These are advanced conclusions, from a self-organised layer of workers that has been severely crushed and alienated from the wider working class in previous years. It demonstrates how the effect of Macron’s attacks on the workers and poor are pushing all sections of French society towards militant struggle.

The gilets noirs have also shown a very impressive instinct for unified class struggle and solidarity, as expressed by Kanouté in the aforementioned interview:

“[I]f there is someone fighting anywhere, in Paris, in Marseilles, or anywhere else, we will support [them]. It is important to support each other, against the state, and the companies who are exploiting undocumented people.”

Another activist, Mariana, confirmed the group is already reaching out to workers and yellow vest groups in Paris in order to build for collective action.

Black, yellow and red vests together!

The Prime Minister’s response to the Pantheon protest echoed the condescending tone used by Macron towards the gilets jaunes: “France is a country based on the rule of law which means... respect for public monuments and for the memory they represent.”

These weasel words are especially laughable in light of the last few months, in which the “rule of law” has very clearly shown its true role: to repress and terrorise the masses when they revolt against the rule of capital.

Let us not forget the violence meted out against the gilets jaunes, which left several people blinded, and others with missing fingers and hands. This violence has not come to an end. Just this week, French officers fired tear gas against protestors in Paris during Bastille Day, and the yellow vests’ weekly protests continue to face heavy repression.

Philippe’s statement demonstrates the futility of securing an “audience” with representatives of the Macron administration, which is currently mired in scandal over the revelation that top ministers spent thousands on lobster dinners in the National Assembly, while inflicting massive attacks on the working class.

Nothing will be achieved through negotiation with this government of the rich, which must be defeated. Beyond that, if migrants are to win their rights, and all workers freed from exploitation and repression, they must join hands on a class basis in the fight against the capitalist system, which is ultimately responsible for all the ills in society.

The #GiletsNoirs strike again in Paris!

"We, immigrants without papers, residents of shelters and of the streets, occupy the Panthéon, the graves of your great citizens...to demand the Prime Minister give papers to all undocumented migrants in France." pic.twitter.com/2ZI3ZC72gc

The gilets noirs have nothing like the numbers the yellow vests assembled at their height. Still, this new development shows that, although the gilets jaunes have receded, they have become a catalyst for a deep-seated anger that exists in all layers of the French masses.

The lessons from that movement must be learned, and the conclusion drawn that mere protests cannot bring down the Macron government. Only full mobilisation of the French working class leading to an open-ended political general strike to paralyse French capitalism can ensure that.

All French workers – native and foreign born – have a common enemy in capitalism, which submits them to frightful exploitation and abuse; and imperialism, which has plunged much of Africa and the Middle East into a bloody nightmare, only to hypocritically imprison and condemn migrants for fleeing this hell.

The capitalist crisis is provoking social explosions everywhere. One of France’s former colonies, Algeria, is already in the midst of revolution, and France itself approached an insurrectional situation last year.

The yellow and black vests should join forces and mobilise together to fight for the liberation of migrants in detention centres, for the right of migrants to live and work in France, for better pay and conditions for all workers; and against the hated Macron administration.

Meanwhile, the leaders of the trade unions and France Insoumise must take up all these demands, so the organised working class can connect with these grassroots movements and galvanise them into a concerted fightback to finish off the ailing government.

For workers’ unity! For migrant rights! Against deportations! Against austerity! Against Macron!