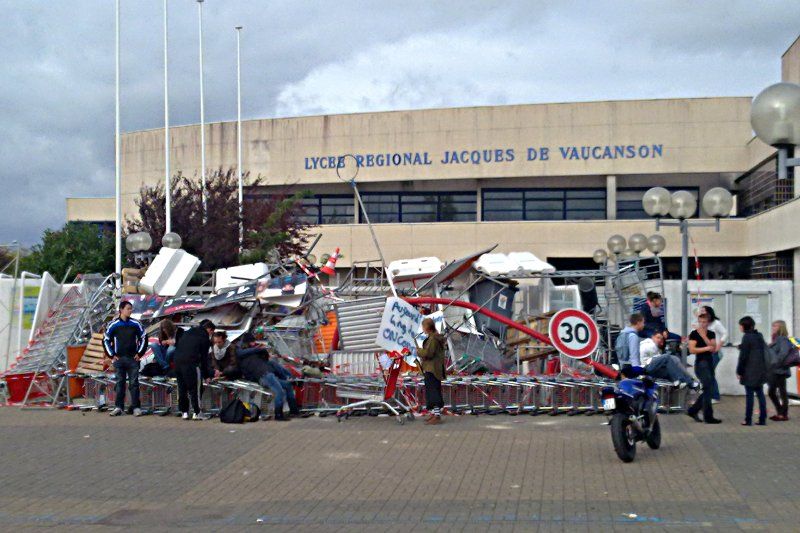 After October 12, the movement against the attack on pensions has reached a critical threshold. The great days of action are no longer the centre of gravity, although they are still massive and increasingly militant, as shown by October 19. Now, the central axis of the struggle has shifted onto open-ended strikes and pickets blockading different sectors of the economy.

Nationwide, the movement has taken the form of a proliferation of initiatives: walkouts, pickets, blockades, demonstrations... In the best tradition of the French workers' movement, the strike is growing on the initiative of union branches, local unions, the inter-professional General Assemblies, etc., in spite of the passivity of the union leadership, which is not giving any "lead". To this we have to add the increasing involvement of the youth, now with the entry onto scene of university students, following the path of school students who have already massively mobilised. The ground under the feet of the Sarkozy government is becoming shakier by the day.

In the country of the June 1936 and May 1968 movements, nobody can say where this strike movement will end up. Already, all sorts of demands ‑ on wages, working conditions, employment ‑ are being attached to the demand of the withdrawal of the Woerth reform. The movement feeds on the anger and the frustration built up within the mass of the population in recent years. The authority of government is in free fall and Eric Woerth is the most discredited man in France. Yet Sarkozy sends him to speak on television shows to explain that the reform embodies the "general interest", two words that resonate strangely in the mouth of the Minister of Labour and Corruption.

The facts continue to contradict the statements of the government. Woerth says the movement is "decelerating" when it is growing stronger every day. Not long ago, [Secretary of State for Transport] Dominique Bussereau said that there would be no shortage of fuel, when motorists can witness for themselves that the opposite is the case, i.e. large scale scarcity. [Prime Minister] Fillon swears that the government will not allow blockades to develop, but throughout the country they are multiplying. And so on. The government is sinking into a grotesque denial of reality. Its impotence grows by the day. This further undermines its authority ‑ and boosts the morale of young people and workers in struggle.

Recently, right-wing UMP leader, Xavier Bertrand called on the so-called "silent majority" to express their support for the Woerth reform. This call was obviously lost into oblivion. Someone obviously had forgotten to inform the leader of the UMP that all opinion polls for several months have been showing clearly that only a small minority of the population supports the government's plan. The vast majority opposes it, just as it opposes the government as a whole and especially Nicolas Sarkozy. Public opinion is against despite the permanent media fanfare ‑ and not a very "silent" one at that ‑ trying in vain to convince us that reform is "essential", etc.

The servility of the media industry is evident. The official news distills all the lies of power. They try to discredit the movement by constantly broadcasting images of clashes between security forces and "youth gangs" (which are infiltrated by agents provocateurs). They remain silent about the powerful movement that is growing, affecting many sectors of the economy. But this has its limits. Instead of discrediting the movement, the mainstream media are discrediting themselves.

The power of the working class 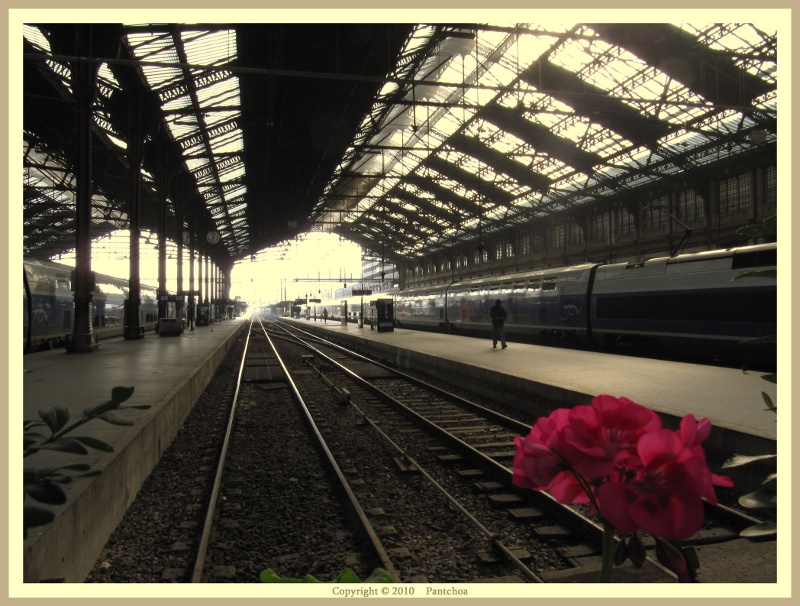 Photo: Pantchoa - Strike at Gare de Lyon This movement is the answer to all those sceptics who, for the last 30 years, have made speeches on the "powerlessness" and "atomisation" of the working class, even about its "disappearance". In reality, workers, potentially, have absolutely enormous power. They constitute the overwhelming majority of the active population. Nothing works without their permission. The first consequence of a great strike movement is precisely to make workers aware of their own strength. “The country is us!" said a striker recently at a refinery in front of the television cameras. This truth has revolutionary implications. Once the workers in action become aware of their collective strength, it is not easy to stop them!

In France and across Europe, the growing integration and interdependence of different branches of the economy have greatly strengthened the potential power of working people. We have seen it now with the strike in the ports and refineries, whose impact on the overall national economy is very important. Similarly, a general strike of the lorry drivers, railway workers and all transport workers would completely paralyse the country. There is another call for an indefinite strike of one significant section of workers, which is weighing on the already sombre atmosphere at the top of the state: that of the union of cash distributors. In 2001, already a powerful strike in this sector had paralysed the circulation and supply of banknotes.

Tuesday, October 19, Francois Fillon announced a "plan for fuel transportation," which would allow a "return to normality" within "four or five days." This announcement was made 48 hours after the already forgotten announcement that there would be no shortages. However, the Prime Minister is not very generous with words when talking about the details of this "plan". That is because unless the members of the government are sent to man the service stations themselves, they will have to rely on the workers to do it. However, workers in this sector do not seem very well disposed towards the government! "Requisitioning" of strikers ‑ with threats of five years in prison ‑ is an outrageous violation of the right to strike. Their main effect will be to increase the anger and determination of the mobilised workers. There will be no "return to normal" as the strike at the ports and the blockades of depots and filling stations will remain solid.

The use of force to unblock the schools, roads and fuel depots is another blatant attack on our democratic rights. But here, the government is playing with fire. Repression could also radicalise the movement. The death of a young person, for example, would trigger an angry mass reaction. Last week, the CGT representative of a refinery strike warned that if the government cracks down on youth, "we will move to an insurrection." 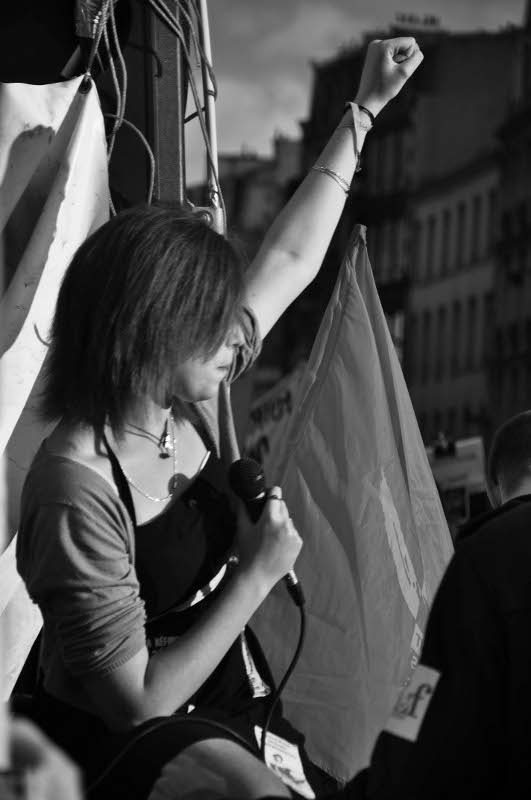 Photo: Audrey AK On numerous occasions, La Riposte has explained that the government's determination to attack our pension system would not be stopped by "days of action", even if these are massive. Everyone is now aware of this. The obstinacy of Sarkozy is perfectly normal in terms of the class whose interests he defends. Facing a major economic crisis and a record public debt (80% of GDP), the capitalist class has no choice but to attack all our social gains. Today it is pensions. Tomorrow will be health insurance, national education, social housing, unemployment insurance, and again pensions, etc. After pouring billions of euros into the coffers of the banks and multinationals, the state wants to recover the money at the expense of the vast majority of the population. Capitalism has come to mean permanent social attacks.

In this context, only the generalisation of a movement of indefinite strike action can force Sarkozy to back down. It is true that such a movement cannot be simply sucked out of thin air at any moment. We should not raise the slogan of an unlimited general strike in a light-minded manner. It is only necessary in specific circumstances: when it is the only one which can advance the movement and when the mood of the working class is ready for it. Today, all these conditions are clearly present. A general strike would be the direct, logical extension of the present multiplication of strikes that each day paralyse the country a little more. Calls in this direction are being made from many union structures ‑ not only trade union federations, but also inter-professional General Assemblies held at departmental level, in the Ardennes and Haute-Loire. Moreover, opinion polls show that faced with the obstinacy of the government, all the forces of the working class and youth are prepared for a long and widespread strike movement.

The development of an indefinite general strike should be accompanied by democratic centralisation and coordination of the movement. Sectors on strike should coordinate at local and national level, on the basis of delegates elected by General Assemblies, and with the right of recall. A national inter-professional coordination of such delegates could centralise information, circulate it, discuss the movement from day to day and take the necessary initiatives to strengthen the strike. The national "Intersyndical" [trade union alliance], many of whom speak about quitting the movement after the Senate vote, cannot play this role.

The government says that Parliament represents the “will of the people”, and as such it can legitimately vote on the Woerth reform. But in reality, the parliamentary majority is the voice of a small handful of big capitalists who hover over the pensions "market" like vultures. Facing them there is an overwhelming majority of young people and workers opposed to the reform. This contradiction between Parliament and the labour movement will be settled by the struggle itself. According to an opinion poll by BVA published today, October 20, a massive 59% of those asked said they were in favour of "the unions to continue their appeals to strike movements and demonstrations after the approval of the text of the pensions reform by Parliament". The union leaders who say the Senate vote "will change the situation" seek to cover their capitulation with an institutional veil. The movement is growing and spreading. We must strengthen and develop it, whatever the reactionary majority who controls parliament thinks.