The social and political situation in France is moving at a breakneck speed. In less than a month, the ‘yellow vests’ movement has put the country on the threshold of a revolutionary crisis. In the coming days, this threshold could be crossed. What will be the decisive factor in pushing the movement forward?

Read the original in French on Révolution |

In his essay on the collapse of the Second International, Lenin enumerated the “objective” conditions for a revolution:

“3) when, as a consequence of the above causes, there is a considerable increase in the activity of the masses, who uncomplainingly allow themselves to be robbed in ‘peacetime’, but, in turbulent times, are drawn both by all the circumstances of the crisis and by the ‘upper classes’ themselves into independent historical action.”

This is exactly what is happening in France. The “suffering and want of the oppressed classes” have continued to worsen in recent years. But the "carbon tax" has become the spark that lit the powder keg. A woman in a yellow vest summarised the situation in a television interview on Wednesday: "Until now, we were on the razor's edge, financially. Now, we are falling.”

As a result, the masses have embarked on "independent historical action", in the form of the yellow vests movement, which has created the conditions for a powerful mobilisation of high school and student youth, in addition to the working class.

Finally, the “crisis in the policy of the ruling class” is not a new development. The electoral victory of Macron, and the collapse of the two historic parties of government (the Socialists and Republicans), was itself an expression of the crisis of the regime of French capitalism. Since April 2017, this crisis of the regime has manifested in several ways: massive abstention in the legislative elections, the Benalla affair (in which Macron’s security officer was filmed beating student protesters), the resignation of Hulot (environment minister) and Collomb (interior minister), etc. The arrogance of Macron – his “Jupiterian” pretensions and his many insults to the people – have only fed the anger and hatred of the masses towards the elite. All this has widened the "fissure" at the top of the state, “through which the discontent and indignation of the oppressed classes can burst forth”, as Lenin wrote.

For three weeks, the government crisis has worsened. In just a few hours, the "moratorium" announced by the prime minister has been transformed, by Macron's order, into a pure and simple cancellation of the tax increases planned for January 2019. Additionally, Equal Opportunities Minister, Marlène Schiappa, has publicly suggested restoring the ISF wealth tax. The media speak of "chaos", but the truth runs deeper than that: the government is divided because it no longer knows how to handle the social crisis. It is in a state of panic. And this panic can also be read in the anxious lines of journalists who, for the last 18 months, have been putting themselves in loyal service of government policy.

Thus, the objective conditions of a revolutionary crisis are evident. One can add a further condition to the list: the bulk of the middle class supports the yellow vests, as all surveys emphasise. That said, in the same essay, Lenin explains that these conditions, in isolation, are not enough to trigger a revolution:

“…not every revolutionary situation that gives rise to a revolution; revolution arises only out of a situation in which the above-mentioned objective changes are accompanied by a subjective change, namely, the ability of the revolutionary class to take revolutionary mass action strong enough to break (or dislocate) the old government, which never, not even in a period of crisis, ‘falls’, if it is not toppled over.” 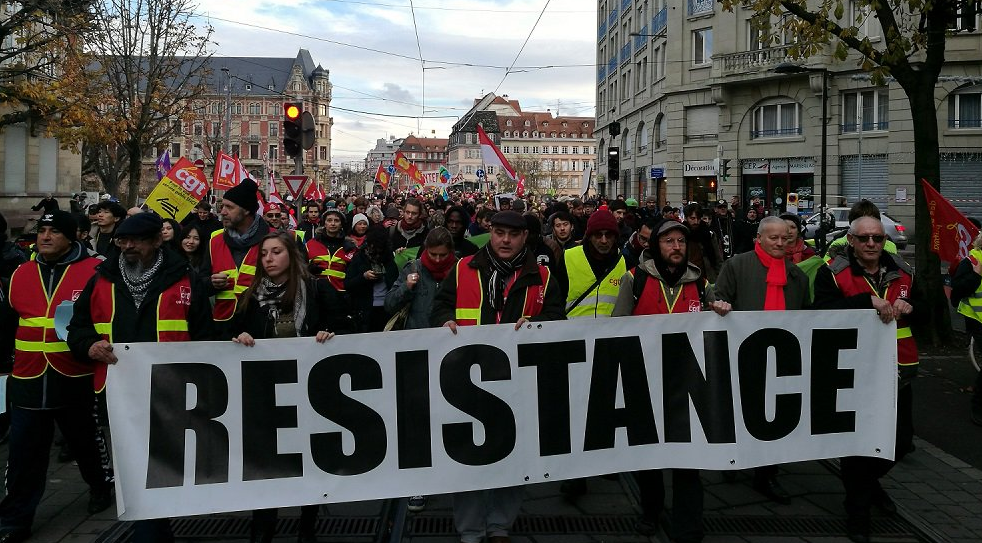 The shameful statement by the TU leadership has provoked the indignation of the rank-and-file, many of whom are mobilising with the yellow vests regardless / Image: Twitter, CGT

The "revolutionary class" is the working class. It is revolutionary because it is the class without property, and because its position in the productive apparatus means it is destined to take the reins of power, to overthrow capitalism and rebuild society on socialist lines. Today, as in Lenin's day, the mobilisation of the working class is the decisive factor in any revolution. In order for the current situation to turn into a revolution, there must be “revolutionary mass action strong enough to break the old government”, as Lenin writes. This must take the form of a vast movement of unlimited strikes, to paralyse production, as argued by a motion (raised by our comrades) passed by student assemblies at a number of French universities.

As early as 17 November, in view of the success of the mobilisation of yellow vests, the trade union leaders (if they were worthy of their stations) should have thrown all their strength into the preparation of a great movement of unlimited strikes. They did nothing of the sort. Three weeks later, they have still not done it. Worse, the trade union leaders (except in SUD) have just signed a joint statement that has practically called to stop the movement. It implores the yellow vests not to protest, but to let the union leaders, "negotiate" with the government. But if the movement – and thus the pressure on the government – were to cease, what would there be to negotiate?

This shameful statement has provoked the indignation of the union rank-and-file, and rightly so. Many activists are mobilising with the yellow vests regardless, as now are the youth, who are experiencing brutal repression as a result of their action.

For a movement of rolling strikes!

That said, even without the support of the trade union federations, a powerful movement of strikes can still develop in the days to come, under the impetus of the rank-and-file, as in June ‘36 and May ‘68. Thousands of workers and union activists in workplaces all over France understand this. They are pushing in this direction. If these workplaces are brought to a halt, Macron will be brought to his knees. He will be forced, at least, to dissolve the National Assembly. However, the question of power will remain, because a revolution always poses this question. Even if Macron dissolves the National Assembly, it is not certain that the bourgeoisie will quickly and easily regain control of the situation. To understand this, it is sufficient to listen to the fervour with which many yellow vests express their disgust with the whole political establishment.

From now on, the movement must equip itself with democratic organs and build for a campaign of rolling strikes. The immediate goal is the paralysis of the economy and the overthrow of the government / Image: Thomas Bresson

From now on, the movement must equip itself with democratic organs. Assemblies open to all participants in the struggle must elect delegates at a local and national level, so as to organise strikes and extend them to as many workplaces as possible. The immediate goal is the paralysis of the economy and the overthrow of the government. At the same time, these democratic organs of the struggling people will lay the foundations for a workers' government, because if the Macron government is overthrown, this question will be immediately posed.

For a movement of unlimited strikes!

All power to the working class!