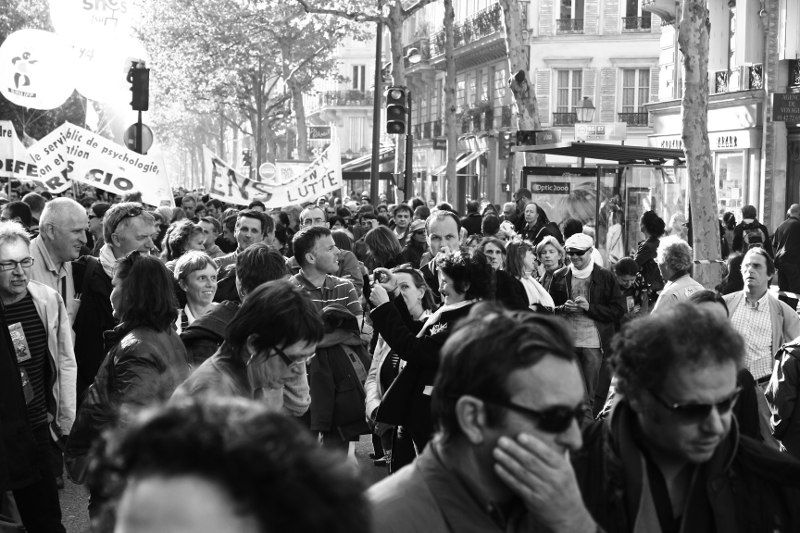 A new national day of action against the pensions reform brought 3.5 million demonstrators to the streets of France on October 12, the largest number so far in this movement. The massive character of the demonstrations can only be compared with the strikes of 1995/96 when the government attempted to cut social security and pension rights of some sections of workers.

The number of protesters are impressive: 330,000 in Paris, a record number of 230,000 in Marseille, 145,000 in Toulouse, 130,000 in Bordeaux, 95,000 in Nantes, 75,000 in Rouen, and a long list (3,5 millions de manifestants en France) of nearly 250 demonstrations in cities and towns all over the country. Just to give an indication of the spread and depth of the movement, in the small town of Le Puy-en-Velay, with a population of 20,000, the local authorities say 8,500 participated in the demo (the unions put the figure at 20,000, including many from nearby towns). The total number of demonstrators increased by 25% from the previous day of action.

The day of action was marked by strikes which affected not only the public sector, postal services, railways, metro and buses, but also spread to the private sector, including metalworkers, harbours and notably the energy sector, with most refineries following the call for strike action.

For the first time school students joined the movement (having just recently returned from their summer holidays). This was a scenario which the Sarkozy government wanted to avoid at all costs, the union of workers and the student youth. In 2006, a massive movement of workers and youth (with 3.1 million demonstrators at its peak) forced the withdrawal of the proposal for a Contract of First Employment (CPE) and ended up with the resignation of right-wing prime minister De Villepin.

On October 12 more than 400 high schools throughout France went out on strike with many occupied or blockaded by the students. This was a response of school students to the warning by the Education Minister that the left and the trade unions were trying to “manipulate” them. University students have also vowed to join the movement massively in the next few days.

The strength of the movement on October 12 will certainly give encouragement to mass workplace meetings taking place on October 13 to vote for continuation of strike action. Already the unions in the railways and Paris metropolitan transport, the oil refineries and the ports have joined the open-ended strike movement.

In the Nord/Pas de Calais region, the CGT organised work stoppages of between 1 and 3 hours in the metal factories, including Alstom and Bombardier. The aim, according to regional CGT Metal workers secretary Jean-Pierre Delannoy was that “an increasing number of workers join open-ended strikes in order to put pressure to the CGT confederation to take the movement to a higher stage”.

There are certainly many factories and workplaces all over the country where strike action in one form or another has already started, which have not been reported in the national media.

However, the national leaders of the CGT are still refusing to give a clear lead to the movement. CGT secretary Bernard Thibault, who ironically was elected to the leadership of the CGT after his role in the all out strikes by railway workers in 1995, declared vaguely that “we must find ways to increase the pressure on the government”. The problem is that after 7 national days of action, how can one “increase the pressure” short of calling for a proper general strike?

The CGT official statement goes a bit further than its general secretary, saying that the CGT:

“calls on workers to continue the mobilisations, to organise united general assemblies in all workplaces, to discuss everywhere, public and private sector, the principle of work stoppages, and to decide democratically ways of making the action more permanent”.

But instead of making a clear appeal for open-ended strikes, which are in fact already taking place in a growing number of sectors, it then suggests a variety of options, like a pick and mix menu:

“open-ended strikes, new work stoppages, regular public rallies in front of the MPs offices, debates, united meetings, all forms of actions which are innovative and diverse should make it possible to make the movement larger”.

The CGT metal workers' leader in Nord/Pas de Calais Jean-Pierre Delannoy, expressed the growing angry mood of the rank and file when he declared that his members were feed up with “walking down the streets” once and again and demanded “real action” in the form of open-ended strikes. 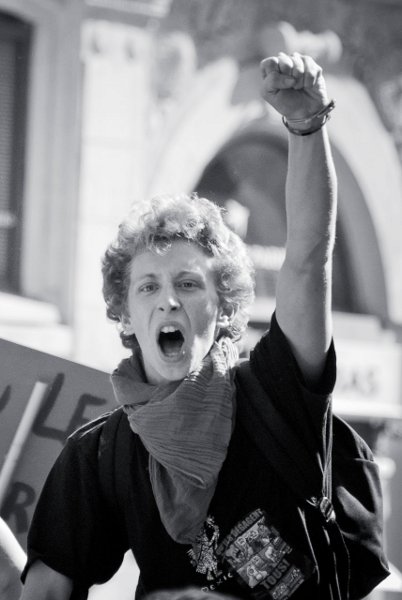 Photo: Olivier Combier The massive scale of the demonstrations on October 12 gave new confidence to the movement. The mood was one of “we are strong – we can win”. There is an enormous amount of pressure from below which is reflected particularly on the local and regional trade union structures. In several important cities new demonstrations have been called ahead of the nationally agreed day of action on Saturday, October 16. This is the case for instance in Toulouse where a new demonstration has been agreed for tomorrow, October 14. In Roanne (Loire), the unions have called for demonstrations every Thursday, Saturday and Tuesday, beyond those decided at a national level.

It is clear that if the leaders of the CGT were to make a clear call for open-ended strikes leading to a massive general strike movement, the movement would escalate to a new level. The “reform” of the pensions system is an attack that affects all sections of the working class. In some, better organised and more militant factories and workplaces, the workers and trade union activists can take the initiative themselves, but a national appeal on the part of the trade union leaders is needed in order to give others the confidence to come out.

Even without such a call, the movement could develop in that direction in the next few days. Trade union leaders like Thibault argue that they cannot impose their will, that the ranks have to decide. It is clear that the last word belongs to the mass workplace meetings, but what are trade union leaders for if they cannot give a lead! But, at this stage of the movement, Thibault, by washing his hands and saying that the rank and file has the last word, might find himself faced with a situation where the movement escapes from his control.

Faced with this situation trade union activists and Communist Party members are correct in taking the initiative themselves. Mass workplace meetings (General Assemblies) should be called everywhere to discuss the beginning of open-ended strikes. Where this has already taken place, pickets should be sent to nearby factories and workplaces to spread the strike. School and university students should also discuss in general assemblies their participation in the movement and organise pickets to spread the movement to other schools, faculties and workplaces.

At a local and regional level elected representatives of the general assemblies should meet to appraise the situation, exchange and centralise information and organise effective mass picketing of those workplaces still not on strike. The shop stewards and local trade union branches should take the initiative and put their apparatus, offices and printing presses at the service of the mobilisation.

The mood is already there, as shown by several opinion polls released on Monday. One of those, commissioned by Le Parisienne, revealed that 69% of the population supported the October 12 day of action, with an amazing 61% supporting a prolonged strike.

Ultimately, if this movement develops into a massive general strike the question of the government will be posed. Sarkozy has already been weakened by corruption scandals and by brutal expulsions of Roma gypsies. The leaders of the Communist Party and the Socialist Party should open call for the government to resign and early elections to be called. If they stood on the basis of a genuine socialist programme against the crisis they would get overwhelming support.