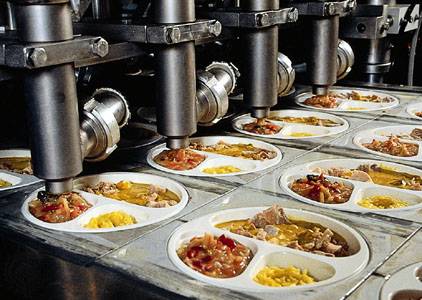 Americans’ dysfunctional relationship with food is regularly lamented or mocked in the media and in academia. What is never explained is the root cause of this dysfunction. Marxism explains that conditions determine consciousness. Your physical and social environment heavily influences the choices you make by limiting the very choices that are available to you.

For most Americans, decisions about food are based on budget, time, availability, marketing, and the societal norms of their peers and community. These social and cultural norms are as conditioned by material conditions and possibilities as individual choices are. If cheap, convenient food—scientifically engineered to appeal to our biological cravings for fat, salt, and carbs—are all that most people have access to, know about, and can afford, guess what they’re going to “choose”? But the dysfunction goes far beyond that.

The United States is the richest country on the planet, and yet, 49 million Americans—including 15.9 million children—are considered “food insecure.” The US Department of Agriculture defines food insecurity as “limited or uncertain availability of nutritionally adequate and safe foods or limited or uncertain ability to acquire acceptable foods in socially acceptable ways.” 4.8 million “food insecure” American seniors must choose among medicine, heating, and food—and many are forced to make ends meet by eating cat food. Cooking magazines, books, television programs, and “food porn” Instagram feeds are more popular than ever, and yet, due to lack of time, money, cooking skills, and knowledge, 50 million Americans rely on unhealthy fast food for the bulk of their caloric intake, leading to epidemic levels of obesity, heart disease, type 2 diabetes, arthritis, respiratory problems, liver damage, stroke, and more.

Indiscriminate use of chemicals and pesticides are poisoning the food supply and environment. 80% of the antibiotics used in the US are used on farms, giving rise to the danger of antibiotic-resistant “superbugs.” Despite all of this, yields on “conventional” foods are only 20 to 25% higher than chemical and antibiotic-free “organic” foods. Capitalists are in the business of producing commodities to be sold on the market—not food. No matter what kind of food is being produced, the goal is to maximize profits. It is not the scale of food production that distorts the chain from farm to table, but rather the pursuit of profits.

It is not only about how much can be produced, but how efficiently the food already produced is used. An estimated 40% of food in the US is wasted, rots, or is thrown out, in warehouses, restaurants, grocery stores, and home refrigerators. And instead of developing infinitely renewable energy sources such as wind, solar, and plasma, 40% of corn grown in the US is used for ethanol fuel—heavily subsidized with billions of dollars in public handouts to big ag corporations who collude with the government to reap fat profits.

Humanity currently grows enough food to feed 10 billion, and yet, the United Nations Food and Agriculture Organization estimates that nearly 870 million of the 7.1 billion people in the world suffer from chronic undernourishment. 100 million children in poor countries are undernourished; one-in-four are stunted; and 3.1 million die each and every year due to poor nutrition. It would cost just $3.2 billion to feed the 66 million children in the developing world who go to school hungry—a mere 1/24th the net worth of the “great philanthropist” and world’s richest person, Bill Gates. This horrific barbarism in a world of overwhelming plenty represents a silent holocaust of millions of people killed each year by the sick logic of capitalism.

Over 7,500 years ago, the neolithic agricultural revolution represented a decisive turning point in human history. For the first time, enough food could be produced to support an enormous sedentary population and free up others to become specialists in one field or another, leading ultimately to the rise of classes and the state. Despite these enormous historic advances in social organization and productivity, agriculture remained prey for millennia to the whims of the weather, pests, and disease. In the not-too-distant past, humans starved to death because they simply couldn’t grow enough food or because crops failed. Today, farmers are actually paid to destroy food—or not to grow it in the first place. Millions of tons of food are hoarded in warehouses to artificially drive up prices. Starvation today is a result of structural and political conditions, not the inability to grow enough food.

At a time when advances in technology could allow for a small proportion of the world’s working population to sustainably feed the entire planet several times over, 1.5 billion people waste away their potential scraping out a bare existence on tiny, unproductive plots of land—and many of them still go hungry. Food riots are still common in many parts of the world—not because there is no food to be had, but because hundreds of millions of people simply cannot afford to buy it. After decades of opportunities to prove the opposite, the verdict is clear: capitalism is incapable of feeding everyone on the planet. The absurdity is that it has nothing to do with humanity’s productive potential, but with the structures we ourselves have created.

Advances in nutrition and agricultural science could allow us to produce abundant, healthy, safe, and tasty food for everyone. Humanity could produce an enormous variety of foods, both to guarantee food security against pests, disease, and climate change through agricultural diversity, but also to keep meals interesting. The infrastructure exists to develop a vast network of public restaurants serving affordable, delicious and interesting food. Home cooking and eating could be transformed into relaxing social activities, not the compulsory drudgery it is for billions today. In short, the knowledge, technology, and collective potential to completely transform the way the world eats exists now. What doesn’t exist is a social structure that allows for a rational and balanced approach to food production, distribution, preparation, and consumption.

Many people want to do something about food and the closely related problem of the environment. But virtually all the proposals out there are limited to tinkering with the existing system or appealing to the good will and reason of the rich and powerful. This is utopian. In a system driven by and defined by commodity production and money, what matters to the capitalists is not food quality or human health, but maximizing profits. The solution to this disconnect between potentiality and actuality is not to be found in blaming individuals for their “individual choices,” or in changing this or that aspect of the status quo. The solution to this gross distortion of one of the most essential components of human life can only come from abolishing the dysfunctional system of capitalism itself.